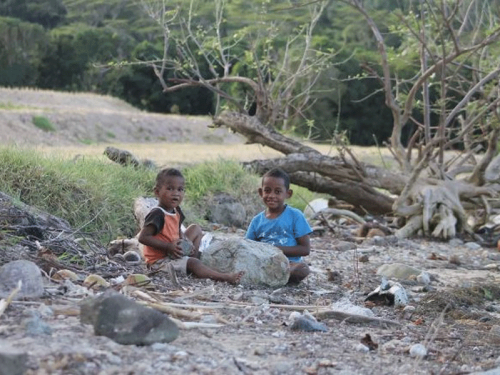 In Fiji, climate change has forced some villagers to relocate, said International Peacemaker Frances Namoumou. (Photo courtesy of the Pacific Conference of Churches)

LOUISVILLE — From an island in the Pacific Ocean, Frances Namoumou recently made a peacemaking pilgrimage to the Presbytery of the James in central Virginia.

Appearing via Zoom, the International Peacemaker discussed how climate change is negatively impacting her home country of Fiji and neighboring islands in the region.

“You go to most of our Pacific island countries with lovely beaches and ocean, but when you do dive into the waters, then you find reefs dried up or there are no more colorful fishes,” said Namoumou, an ecumenical animator for the Ecologic Stewardship and Climate Justice Program in the Pacific Conference of Churches.

Local women who used to be able to walk along the beach to fish for their families now have to go out farther, spending long hours trying to find food, she said.

For them and others affected by the climate crisis and the collapse of the ecosystem, “it’s really about survival,” she said. 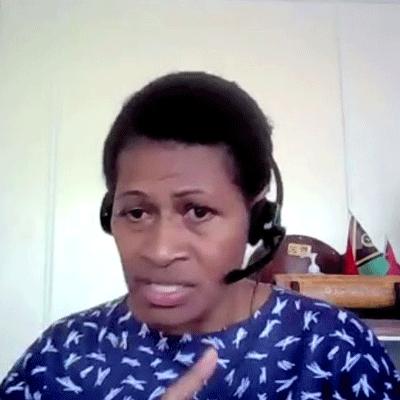 Namoumou is a member of the fall 2021 class of peacemakers for the Presbyterian Peacemaking Program. (30-minute video: “Join the Movement: Peacemaking.”)

The peacemakers normally travel to the United States in person, visiting churches and presbyteries to provide a global perspective about issues impacting the world. However, all the visits were virtual this year because of the pandemic.

During online visits that started in September, peacemakers focused on the PC(USA)’s Matthew 25 invitation as it relates to hunger ministries; clean water and environmental justice; immigration, migration and refugee issues; poverty alleviation; health and wellness; and racism, systems of oppression and violence.

Namoumou visited the Presbytery of the James Oct. 24 and 25. During the latter visit, she received an introduction from Presbyterian Peacemaking Program Coordinator the Rev. Carl Horton and warmly greeted guests in her native language.

Switching to English, she used maps to help orient viewers to her native land. Fiji is a 3-to-4-hour plane ride from Australia, she said, and is in a part of the world that includes multiple subregions. 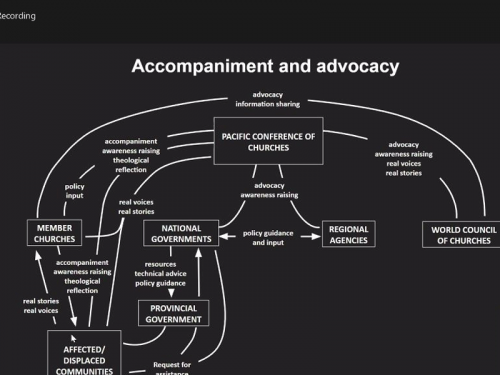 International Peacemaker Frances Namoumou visited the Presbytery of the James to talk about her country and region during “Peacemaking in Fiji: Climate Justice and Disaster Management.” (Screenshot)

Ninety percent of the people living in the Pacific are Christians, she said. “Our Christian faith and indigenous spirituality play a very important role in how we decide or make decisions,” she said, stressing the importance of engaging church leaders and providing theological reflections. There’s “a lot of responsibility for the churches to respond to the concerns from communities.”

The region is plagued by a number of environmental issues that crop up, including water scarcity. A lot of the communities rely heavily on rainwater storage, she said, and sometimes an island will have to plead for other Pacific countries to send them bottled water to sustain them.

A good water supply is important not only for drinking but for agriculture. “We were used to one month or two months of dry season because that has been the norm” and “we’re able to save water for that long period.” But now, the dry season may last six months, which is problematic when you’re surrounded by salt water, she said.

Other problems include coastal erosion, sea level rise, and floods that come right into villages, she said. She also noted the intensity and frequency of disasters, such as cyclones, that often strike before people have recovered from the last one. (Read the Eco-Justice Journey blog.)

She also spoke about noting the importance of financial support for vulnerable communities and remembering that climate change has both economic and non-economic consequences.

“As citizens of Fiji, we will hold our governments accountable,” she said. “For those of you in the U.S., I guess you have the right and responsibility to hold your government accountable. … We’re looking at the bigger picture of who is my neighbor?”

The climate crisis poses “a lot of health risks” for many people, including women, young people, individuals living with disabilities, older people, and men, and that’s on top of the pandemic, she said.

People in the Pacific region also grapple with impacts on their mental health and their sense of identity, which can be hurt when communities have to relocate.

“We are not an individual, but we are an extension of our land and ocean,” she said. “We’re an extension of … our sacred tree, sacred plant, sacred animal, sacred bird. When the ecosystem collapses around us, that identity is broken as well. I think this is an important context when we’re talking about the dignity of people in the context of climate change. … Our identity comes from where we are from — our island home, our land and ocean that we have been called to look after.”

Viewers thanked Namoumou for putting a face on the issue of climate change and for calling on Americans to make their leaders accountable when it comes to climate justice.