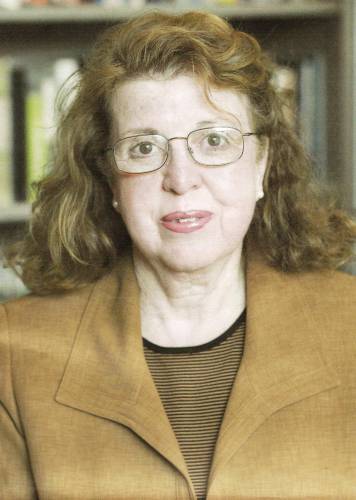 At about that time, her hospice chaplain had contacted the Presbyterian Center to ask for a picture of the tapestry hanging outside the chapel. Wilkey had commissioned it for World Communion Sunday, when she had worked here in the nineties in the Office of Theology and Worship.   She’d used it as a cover for a book she published on Worship and Culture, which was a significant part of her life’s work.

Celebrated as a giant in her field — described as a force, and brilliant, by those who know and love her in the church’s liturgical world — Gláucia, 78, is now in assisted living at an Austin, Texas, memory care unit.

“She has an extraordinary mind and speaks seven languages,” Batchelder said. “It’s tragic, but this disease — dementia, Alzheimer’s — is taking it from her.”

As an associate for Theology and Worship, Wilkey organized the Pastors as Liturgical Theologians (PALT) program. Designed for those who had done advance work in the study of liturgy — and for those who wanted to learn and grow in the field — PALT was revolutionary for  those who attended.

“What she opened me to the most was an in-depth understanding of the Sacraments.”

Wilkey helped Long understand worship not just in a Reformed way, but ecumenically. And that worship was more than just a sermon and three hymns — that word and sacrament, song and prayer should be fully integrated.

“Everything I’ve done in the last 20 years is because of Gláucia,” said Long — who went on to get a doctoral degree in liturgical studies and teach at Columbia Theological Seminary.  Long also edited the 2018 Book of Common Worship with the Rev. Dr. David Gambrell of  the Office of Theology and Worship.

When Wilkey left the Office of Theology and Worship, she went to Seattle University, where she served the Jesuit school as Director of the Chapel and faculty member.

During her decade there, she created a Summer Institute for Liturgy and Worship. She brought in world-class liturgical scholars. People came from all corners of the globe for an intensive week of not only learning — but worshiping as a community.  Her pearls of wisdom over the years became known as “Gláucia-isms.”

“She would say, ‘teach your body and your body will teach your soul,’” said Batchelder, “in reference to how we should embody the liturgy.”

Another favorite — “an eye for beauty, a heart for grace, and a mind for justice”— was a reminder of what she looked to incorporate in her work. 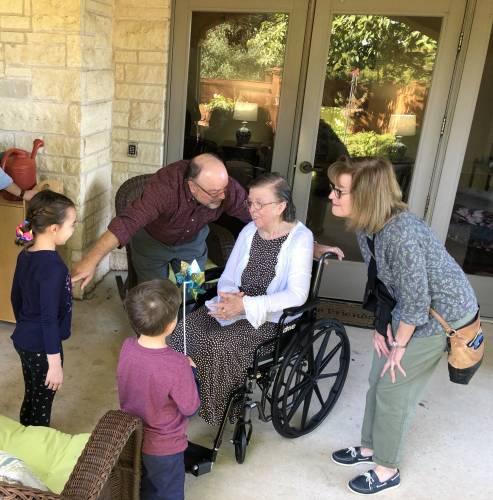 Gláucia Vasconcelos Wilkey meets the grandchildren of David and Nancy Batchelder during a Thanksgiving visit at her memory care facility in Austin, Texas. (Photo by Mark Batchelder)

At those summer institutes, members of the North American Academy of Liturgy would gather for pre-meetings to discuss the state of liturgy in their denominations.  In those conversations the Association for Reformed and Liturgical Worship (ARLW) was formed.  It became an network for pastors committed to worship renewal and for musicians searching for churches that wanted theological depth and liturgical sensitivity in song.

ARLW also advocated at seminaries and judicatory bodies for greater care of worship-related matters — and with committees on preparation for ministry that seminarians under their care know something about the tradition of their worship.

Wilkey also served two PC(USA) churches in the United States; as a missionary to Portuguese, Italian, Spanish and French-speaking peoples in Canada; and as a seminary professor in her native Brazil.

Long has vivid memories of Gláucia, particularly during their time together at the summer institute. The two of them sang together at a compline service. That meant the world to her, because it was a song that Gláucia had composed with her husband Jay — that they both loved.

Another time, Wilkey wanted to share a new song at the Institute, one that she had learned at the 2006 World Council of Churches meeting in Porto Alegre, Brazil —For The Troubles and the Sufferings.  So she stood up and started singing it in Portuguese and then English.

“She had such a beautiful voice,” Long said, choking back tears. “It’s hard for me to comprehend such a presence becoming frail — and her mind challenged.”

Every year before the summer institute began, Gláucia would have everyone involved in the leadership team to her house, where she had prepared a feast.

“She was an amazing cook,” Long said. “She showed us what Christian hospitality looked like.”

Batchelder remembers Gláucia coming to his home, way back in the 1990s when his twins were young.  Both are now professional classical musicians, with degrees in music.

“Her influence lives through them,” he said. “She’d always say our family was as close to a ‘Brazilian family’ as she’s ever found outside her country.”

Wilkey spent the last decade of her life caring for her husband, who died on Jan. 25, 2017.  Batchelder saw her devotion to Jay straining her physically and emotionally to the point of exhaustion.

“She was so strong willed,” he said. “It wasn’t long after her beloved Jay passed that she began to confront issues in her own health.”

“The loss, for me, is huge. A generation of mentors is passing. It’s lonely. I’ve been grieving for a couple of years now — her father lived to be 105.”

There’s a hymn in Glory to God written in 2002 by Jay Wilkey. With the tune name Gláucia, it’s a setting of Psalm 31 in the “Living and Dying in Christ” section of the hymnal.

Its words in Spanish and English express the hope of the resurrection, “Make your face to shine upon your servant … My times are in your hand.”