Christmas Joy Offering – Supporting our leaders: past, present and future.
Make A Donation Click Here >
Home › It took a village, and most of its people 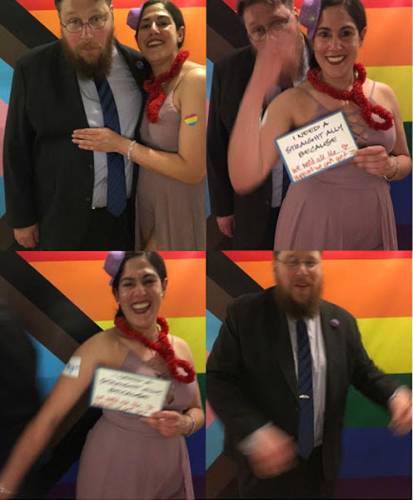 The Rev. Matt Waters and his wife, Yaz, in the photo booth at Pride Prom. (Contributed photo)

WILMINGTON, Delaware — On May 3, more than 50 young people, many identifying as queer, others as allies, walked the red carpet last month to enter Delaware Pride Prom – their prom.

As the first wave came through the doors, they paused just a beat to take it all in: tables set with trays of food, a DJ playing music they had requested, a photo booth, rainbow streamers and a floor covered by colorful balloons.

Their reactions were visible on their faces and in their body language. They charged down the steps and into the space that was prepared just for them. Rumors of a late-evening conga line have been confirmed.

And the evening was spectacular. As chaperones, we found it uplifting and joyous. Judging from the lack of cell phone use, we’re pretty sure the guests of honor had a blast, too!

A gift that bore witness

In a time when grand gestures of kindness seem in short supply, this event proved to be a gift.  It was a gift collectively given to the young people gathered and to the surrounding community that bore witness. In the tradition of Stone Soup, many people came together to provide the support, funding, transportation and logistics.  In addition to several local churches, the event enjoyed the support of non-profits, local government and the private sector. Together, we achieved what no one group could have assembled.

Navigating such a collection of resources was, at times, challenging. The cooperation and coordination among churches, community groups, and private companies was complicated and, at times, pretty messy.  For all the reasons we hesitate to reach out to other local churches for partnership, we struggled with wrangling both faith and secular partners. The differences in operating styles went well beyond the “debts vs. sins vs. trespasses” debate when creating liturgy for shared worship. The months of planning and preparation — all outside of anybody’s normal scope of work — were tiring and difficult. And yet, the message the church and our surrounding community were able to convey couldn’t be bought for any amount of money. It was, in the truest sense, a labor of love.

The idea started out as something much smaller. Some church youth wanted to stage an event to support and to celebrate one of their peers who was transitioning. A few of us met early on — just a couple pastors and a member from another local church. Over coffee that day, we agreed that the idea had merit. We were hopeful for a Valentine’s Day dance, or maybe a dinner — something to capitalize on the “love” theme of that season.

But as our circle of interested leadership grew a bit, we realized that we had something with more potential than the looming February date would allow us to adequately prepare. Rather than put it off for a year, we agreed that a Pride Prom would be a way to show support for our queer kids in a fun, quirky kind of way. We had no idea what support — if any — we might get from our larger community. We also had no idea how queer youth and their allies might react to a church-hosted event just for them.

In some ways, our fears were justified. Of the four clergy people in the final leadership circle, two had churches that declined to openly support the event. But the other two churches not only supported it, one even agreed to host Pride Prom in a newly-renovated hall. Soon the local hospital network was on board; they brought both financial and administrative support in the name of community health education. That led to more commitments of support, including the United Way, Big Brothers and Big Sisters, Jewish Family Services and even a parking sponsorship from a local developer who owns a nearby lot.

Our little operation became an exercise in irrational hope. During a planning meeting, one of our event partners asked, “What is your budget?  I assume you have one.” It was during a conference call, so she couldn’t see us look at each other and shrug. We didn’t lie, exactly … we just let her assumption stand. Truth was, we were operating in the risky, nebulous world of the faith budget. Up to that point, we had understood faith budgets as how struggling churches enter a new year of projected deficit. But in the case of Pride Prom, we really did see something grow from nothing.

Well, not nothing, exactly. We had the physical plant resources of a large, downtown church with a long history of social justice work. We had a handful of clergy and other local do-gooders who invested God-only-knows how many hours tracking down vendors, arranging for security, creating a website, booking a caterer, and generally learning event planning on the job. The wild thing was, the longer we stuck with our irrational hope, the more support the event received.

First the mayor wanted to attend to extend the city’s support to this young, queer community.  Then we had a celebrity guest volunteer for photo ops on the red carpet. One of our leaders had a partner with a limo company. As a result, one group of kids — winners of a ticket raffle — got a free limo ride to Pride Prom. Another group, from a high school just out of state, was struggling with transportation. In response, the planning team sponsored a chauffeured van ride to and from the event. Problems arose, and then solutions followed. As if the event was somehow specially blessed, no barriers remained in place for very long.

If providence seemed to smile on the event, then the young people attending smiled right back.  For many, this was the first event they had attended specifically assembled just for queer youth. That distinction created space for a freedom of expression that may not have been possible at typical prom events. Guests were free to use whatever names they preferred as they signed in; one trans child asked, “Which name should I use?” Our chaperone at the door replied, “The one that is you.” The reaction was ecstatic.

Changing rooms were provided for those who needed to get into their most comfortable outfits. And, just in case we had gauged all other reactions incorrectly, event planners were met with an enthusiastic “Yes!” when we asked the crowd if Pride Prom should be offered next year.

One of our goals was to offer hospitality to anybody who might be there as a guest or as a supporter. It was important that parents also felt valued and honored. Rather than insist parents drop their children off at the door, we instead invited them in. We created a space for them to find resources and a sense of community by asking our sponsors to set up information tables. This gave parents access to groups and services relevant to their children, such as health care, counseling, activities and support groups. One mother otherwise uncomfortable with such an event was encouraged to participate because it was held in a church; the backing of a faith organization meant a great deal to her and lent credibility to the effort.

What began as a small but grand gesture grew on faith and goodwill into a big, spectacular message of love for all people. What one church would have struggled to do pretty well, several churches — along with our community partners — were able to lead into an event with scale and impact beyond our original dreams. Each new addition to our leadership and each new community relationship seemed to spawn new possibilities and new connections. The love we had for these young people — the same love God has for all of us — was surely blessed and multiplied by the support of others with hearts to serve all of God’s children.