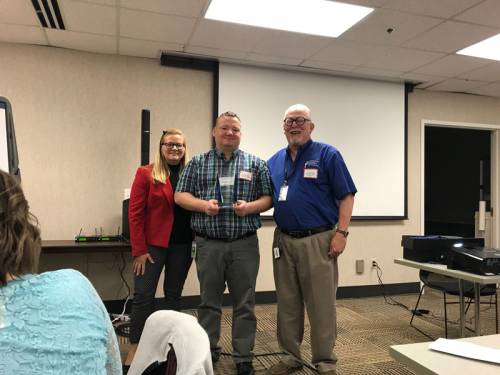 Pictured during last week’s awards ceremony are, left to right, Tracy Epps, director of the Iowa Department of Homeland Security; Richie Ritter, the recipient of the 2019 Individual Volunteer of the Year; and the Rev. Dr. Greg Smith, chair of the Iowa Disaster Human Resources Council. (Contributed photo)

LOUISVILLE – The crises were different, but one of the results was the same: Presbyterians stepped up when help was needed.

Last week, when the Iowa Disaster Human Resource Council went to hand out its annual Don Hampton Service Award to an individual and a group of volunteers, both recipients hailed from Presbyterian churches. That was not surprising to the Rev. Jim Kirk, Presbyterian Disaster Assistance Associate for National Disaster Response.

“I continue to be impressed as I reach out to mid councils and communities and hear story after story of Presbyterians’ response to disasters,” Kirk says. “Local congregations and Presbyterians are always engaged in their communities when there is a need.”

As often happens, the individual award winner felt the call to action when disaster dropped from the sky.

Richard Ritter, a Navy veteran, volunteers with Team Rubicon, a national group of veterans engaged in domestic and international disaster response.  But he was home in Marshalltown, Iowa on July 18 when a tornado struck.

“If you drew a line through our most impoverished side of town, that’s the route it took,” Ritter said of the twister.

“Richie has made it his mission to see the families that were impacted by this tornado be safe and sound in their homes again,” said Rev. Dr. Richard King of First Presbyterian Church Marshalltown, where Ritter is a member.

King nominated Ritter for the Don Hampton Award, pointing out innovations in his disaster response such as an app that volunteers were able to use to assess and share needs of people impacted by the storm. Ritter speaks proudly of the church, which itself sustained damage in the storm but still managed to serve more than 6,000 meals to victims and volunteers in the week and a half after the tornado.

Click here to learn how you or your group can volunteer with Presbyterian Disaster Assistance.

Ritter has continued to help with Marshalltown recovery, working with Central Iowa RSVP, a senior volunteer group that responds to disasters.

“To him this is just what he needed to do, and that is why he is so deserving of this,” Linda Von Holten of RSVP says of Ritter. “He went out and did what needed to be done, and our organization is so grateful for that.”

The group award goes to an organization that found its preparation paid off when a different kind of emergency struck. 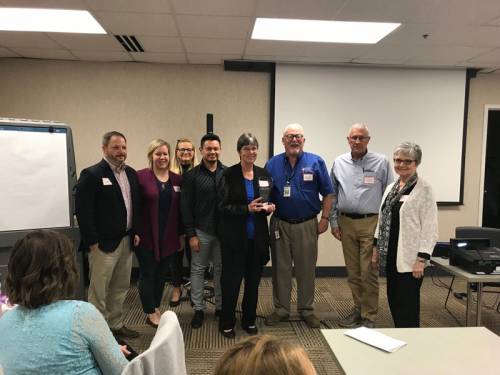 Since 2015, First Presbyterian Church in Mount Pleasant, Iowa had been working to build bridges to the immigrant and refugee community in their town of more than 8,000 through IowaWINs – Iowa Welcomes its Immigrant Neighbors. While started through the church, it had grown to an ecumenical group with participation from a variety of denominations.

The group found it needed all the help it could get on May 9, when Immigration and Customs Enforcement raided a concrete plant in the town, detaining 32 men and leaving their families in crisis.

“One of the things we were able to do when the raid happened was we brought the people together with the resources they needed that night, which was amazing,” said Tammy Shull, chair of IowaWINs. “And the next night, we were able to have a prayer vigil in the town’s square so that people could recognize there was a response to this – that this has happened in the community and people wanted to respond in a humane way and recognize that families were being impacted by this in a way that was very significant, and we needed to pull together to help them.”

Help included taking care of basic needs and legal help for those detained. And it has become a long- term response because even though many of the men detained have been released from custody, they cannot work while they await their court dates.

Efforts to help the community have included the popular idea of creating a taco truck that would combine culinary expertise, fruits and vegetables of a community garden and food-handler training. Overall, IowaWINs has generated more than $150,000 and 100 volunteers to help support the community in its time of crisis.

“For us as a community, there was never a hesitation about sharing God’s love after we’d been shaped as God’s people through the grace of Jesus,” said Rev. Trey Hegar, pastor of First Presbyterian Church Mount Pleasant. “We just said, ‘Yes, this is what we’re going to do.’ The session never hesitated, the IowaWINs leadership never hesitated, the community within the church – even some who don’t agree with immigration policies – said, ‘Yes, this is what the church is supposed to do.’

“We love our neighbors, no matter where we are politically or race or creed. We were humbled in some way that we were called to do this. Like some people say, ‘Why did you run into the fire to pull somebody out?’ It was never a question; I just did.”

Kirk says, “PDA is present anytime a Presbyterian steps in to help. It’s about being the hands and feet of Christ. Presbyterians intuitively step in to help.”

That is also demonstrated in the fact the award the Iowans won was named for a Presbyterian volunteer.

Don Hampton was a member of the Presbyterian Disaster Assistance (PDA) National Response Team from 2007 until 2013. He was also an active member of the Iowa Disaster Human Resource Council and the National Association of Voluntary Organizations Active in Disaster (VOAD), which gave Hampton its Volunteer of the Year Award in 2013, shortly before his death. The national award has since been renamed for Hampton as well, and last year it went to PDA National Response Team member David Rauer.

Members of Hampton’s family were at the Iowa ceremony April 18 in Des Moines, which Ritter said, “brought a tear to my eye,” as Hampton’s legacy in Iowa disaster response is well known.

So, you want to volunteer in a disaster area? Here’s how.