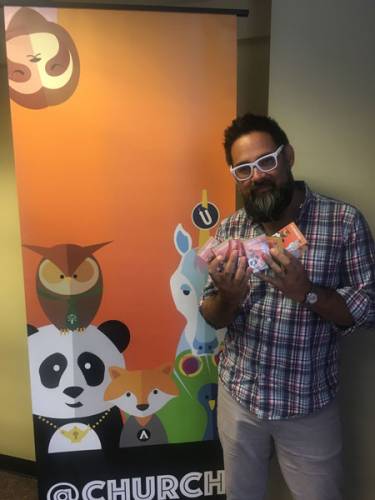 The Rev. Dr. Jason Santos will help the Office of Christian Formation distribute and play the @CHURCH card game he and his colleague, Brian Frick, helped develop together with other game enthusiasts. The intergenerational card game debuts next week at Presbyterian Youth Triennium (Photo by Paul Seebeck)

LOUISVILLE — @CHURCH, a new card game that invites players to consider the nature of church and how disciples are formed in it, will debut next week at the Presbyterian Youth Triennium.

Created in part by card game enthusiast the Rev. Dr. Jason Santos, who is the Presbyterian Mission Agency coordinator for Christian Formation, the game highlights the six practices of intergenerational faith formation on which the national office is focusing: Sabbath, prayer, storytelling, service, hospitality and retreat.

“The goal of this quick, simple card game is to assemble a hand of six cards and score sets of matching symbols related to one of the practices and matching colors related to the different life stages,” says Santos. “The highest scoring set is one where you have all of the life stages participating in the same Christian practice, which is at the heart of intergenerational formation.”

@CHURCH is the second game Santos has been involved in designing and producing. At the 2016 Triennium, the Christian Formation ministry area debuted its first card game, UGRAD,  which was designed for UKirk, the collegiate ministry network of the of the Presbyterian Church (U.S.A.). Because it was such a hit among PYT participants, Santos said the Christian Formation staff decided to “reskin the game” for the church’s camp and conference ministries. The resulting @CAMP was also met with much enthusiasm.

As Christian Formation began planning for PYT 2019, the idea to release another card game surfaced.

“We hoped that whatever game we created would get people thinking about the make-up of church,” said Christian Formation associate Brian Frick, “and how important intergenerational formation is for discipleship in our congregations.”

Rather than design the game in isolation, Santos and Frick invited a handful of Presbyterians whose work intersected with game theory and design to participate in a two-day Theology of Play Conference (TOPCON) at Menucha Retreat and Conference Center in Corbett, Oregon, a half-hour east of Portland.

At TOPCON, the group engaged a theology of play and discussed how tabletop gaming might be used in Christian formation. After laying this foundation, Santos set up a few boundaries for the PYT game — it must have fewer than 40 cards, contain no language requirements, be non-combative, and focus on the importance of intergenerational faith formation in a church setting. While the game wasn’t designed by the end of two days, Santos said he had “the skeleton needed” to develop the concept further.

In the ensuing months, the design process took shape — and the result was @CHURCH.

“Games provide people with a bounded space and set rules through which they can engage with one another,” said Santos. “It’s a little shared experience that opens doors to conversation and hopefully laughter.”

“We loved how UGRAD and @CAMP offered spaces of intersection for players,” he said, “and we wanted to foster that again.”

According to Frick, yet another card game might be cut by the Christian Formation ministry team.

“We’re hoping this won’t be the last one,” he says. “The reception at Triennium will no doubt be an indicator whether we produce a third game.”

Participants will have the opportunity to play @CHURCH at the Christian Formation expo booth at PYT 2019 — and take a deck home with them.  The game is free, but there is a limited supply.  Later this year churches will be able to order copies through the Office of Christian Formation webpage at www.pcusa.org/christianformation.