Now accepting applications for Katie Cannon scholarships.
Make A Donation Click Here >
Home › In for a penny, in for a pound 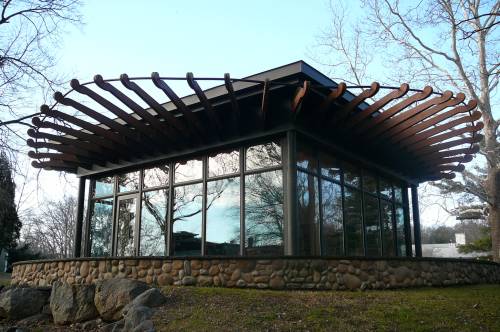 The Meditation Space at Stony Point Center, which will receive nearly $631,000 to take care of deferred maintenance projects identified by a consultant as immediate needs. (Photo provided)

LOUISVILLE — On the recommendation of a consultant hired to identify immediate needs at Stony Point Center north of New York City, the Presbyterian Mission Agency Board voted Wednesday to spend $630,750 in unrestricted bequests on projects including roof repairs, a sewer line replacement and a commercial-grade electric mower.

Meeting via teleconference, the board made its decision during a closed session following a report in open session presented by the Rev. Dr. Ray Jones, acting director of Theology, Formation and Evangelism for the PMA and a member of what’s being called the “Stony Point Center Roundtable.” The board announced its decision to pay for the proposed work  following the closed session but did not announce the vote tabulation.

Marketing itself as “more than a conference center,” Stony Point Center calls its facility along the Hudson River “a multifaith intentional community dedicated to the practice and study of hospitality, nonviolence and justice.”

“It is important not to allow facilities to deteriorate further,” Run River’s report states. “We recommend moving forward as quickly as possible with projects such as roofing, especially for Maple and the Gilmor Sloane House. At this time, we foresee a strategic site plan which will include a long-term future for both of those structures.”

Denise Hampton, controller for the Presbyterian Church (U.S.A.), told board members that the PMA has since July 2018 received what she called “large bequests” that have been designated for Mission use. “Those funds are available,” she said, and are sufficient to cover what Run River labeled Stony Point Center’s “immediate deferred maintenance needs.”

Rick Ufford-Chase, a former General Assembly moderator who together with his wife Kitty manage Stony Point Center, told the board that the Evergreen Building boiler is the last of Stony Point Center’s original 1962 boilers. “We wanted to baby it through,” but that became impossible, he said. The mower to be replaced is 18 years old, “and we can’t baby it any longer.”

Board members asked a few questions before entering into closed session. Before they did, Jones told them that Run River Enterprises will be in regular conversation with the board until its next in-person meeting in September.

“We are very aware this is a new vision for Stony Point,” one that includes Stony Point Center as the conference center for the PMA, Jones said. “To get to that point, there are a number of things we need to do to run as close to the black as possible.”

“There are things we have to do now,” he added, “in order to live into a future vision that I believe will be sustainable.”