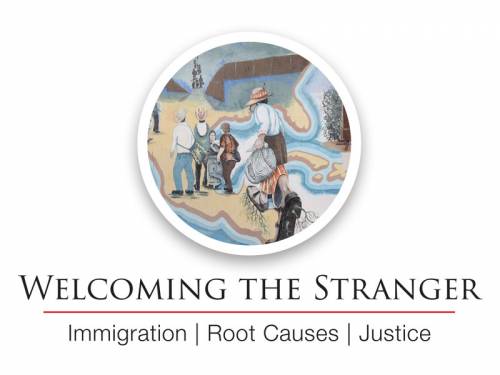 LEXINGTON, Ky. — Lisa Haugaard started her comments on Tuesday afternoon’s premiere episode of “Welcoming the Stranger” with some plain talk about Central American migration to the United States.

“Many Central Americans, we believe, should be able to apply for asylum in the United States, and the United States should be able to accept them and ensure that people who fear for their lives are not sent back to their countries,” said Haugaard, the co-director of the Latin America Working Group. “That’s the way our country has acted at its best moments and that is the international system of accepting refugees who are fleeing and the people who need access to asylum.”

Many Central Americans coming to the U.S. border, she said, are fleeing for their lives. The threats include violence, be it domestic, gang or even state officials; corruption, which drives violence; and impacts of climate change, including natural disasters such as the back-to-back hurricanes Central America experienced last fall.

Haugaard and the Rev. Santiago Flores, Executive Committee member of IRCES (The Reformed Calvinist Church of El Salvador), a PC(USA) partner, were the inaugural guests on the new webinar series designed to give Presbyterians and others a broad, deep perspective on immigration from staff, ministers and partners who work in immigration on a day-to-day basis. It is presented by the Presbyterian Church (U.S.A.) Office of Public Witness, Presbyterian Disaster Assistance and the Office of the General Assembly’s Office of Immigration Issues.

On Wednesday, the organizations also joined with dozens of ecumenical partners and non-governmental organizations in the Welcome With Dignity campaign (#WelcomeWithDignity), which aims to reform the U.S. asylum system putting dignity and compassion first.

Speaking from El Salvador, Flores talked about some of the conditions that prompt people to make the difficult and dangerous journey to the U.S. southern border.

“The United States turned a blind eye in the past to the policies that governments have implemented, for example, in the ’90s, when a peace agreement was passed in Central America that allowed the social and economic environmental conditions of the people to deteriorate,” Flores said in Spanish, translated by a PC(USA) interpreter. “Right now, in El Salvador, we are having an important discussion on how to strengthen civil society while maintaining autonomy and how to economically develop the region, improving the economic situation and families. And we’d love to do this together with our siblings in the United States.”

In a PowerPoint, Flores highlighted efforts from local entrepreneurship programs, food security efforts and victim support programs for addressing some of the issues in El Salvador.

The conversation comes at a time of shifting context for immigrants and people working in immigration from the administration of Donald Trump, whose policies drastically limited migration from Central America to President Joe Biden, who has expressed more support for immigration and humane immigration practices. Speakers said they saw hope in Biden’s statements, but they said it is important to continue pressure on the administration and the U.S. Congress to improve.

Haugaard said there were three essential things needed from the Biden administration:

Amanda Craft, manager for advocacy in the Office of Immigration Issues, moderated the webinar and wrapped it up by encouraging Presbyterians to do a number of things, including forming groups in their congregations to learn more about migration issues and how they can respond, particularly in their own communities. Advocacy with the executive and legislative branches of the U.S. government is also important, she said, at a time when policy is moving very quickly.

“Policy in migration decisions should always reflect humanitarian and a human rights approach,” Craft said. “As we think about the wording we use with our members of Congress, and with a Biden administration, continue to say, ‘These are human beings. These are our siblings in Christ who are on the move, and we encourage and urge you to act courageously to put into place legislative measures that protect human beings.’”

The next episode of “Welcoming the Stranger” will be at 3 p.m. EDT June 9 and focus on Migration Detention. Watch the Presbyterian Disaster Assistance Facebook page for more information.

Join Presbyterian Disaster Assistance at 5 p.m. May 27 for “PDA Around the World,” with its first episode focused on Honduras.