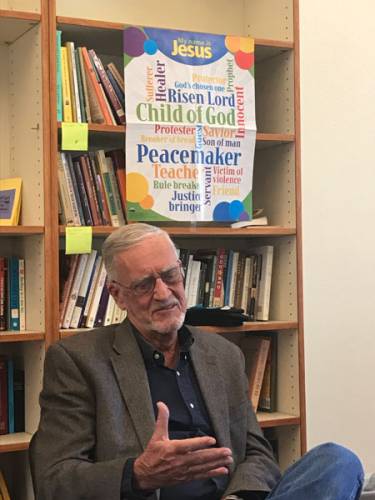 The Rev. John Fife, former Moderator of the General Assembly and the 35-year pastor of Southside Presbyterian Church in Tucson, speaks with a Presbyterian Mission Agency delegation. (Photo by Leslie Vogel)

TUCSON, Ariz. — One day after hearing last week about the border experiences of three Border Patrol agents, the Presbyterian Mission Agency delegation learning about issues along the U.S.-Mexican border and in Guatemala heard a different take from the Moderator of the 1992 General Assembly of the Presbyterian Church (U.S.A.).

The Rev. John Fife, a longtime human rights activist and pastor emeritus at Tucson’s Southside Presbyterian Church, where he helped found the Sanctuary Movement during the 1980s, said the movement was begun to help stop deportations to Guatemala and El Salvador, embroiled in internal armed conflicts.

The movement returned during the administration of President Barack Obama, whom Fife called “Deporter in Chief.”

Declaring one’s church a sanctuary “is not a great strategy right now,” Fife said. “It’s like going into solitary confinement in a church. It’s now primarily secular based, but if that secular side fails, then you have faith communities as the last resort to protect folks.”

Fife said nearly 9,000 sets of human remains have been found in the Arizona desert, perhaps only a third of the people who have died trying to enter the United States. While groups including No More Deaths have established medical clinics, “we have documented the destruction of humanitarian aid in the desert,” Fife said, and “we have documented Border Patrol violations with absolute impunity.” Groups have partnered with the American Civil Liberties Union “to get dramatic changes ordered by the court,” he said.

“Now (authorities) have started to charge our volunteers with putting water on federal land and feeding migrants in the desert,” he said. “The government has taken a beating in the public eye. People ask, ‘What do you mean you are charging people with providing humanitarian aid?’”

To reports of undocumented migrants buying or renting children to help their case at the border, Fife called that “rhetoric from the (Trump) administration.”

“There have been thousands and thousands of deaths, and (immigration) policies have failed because the government never understands the desperation of poverty. Would you risk your life to feed your kids? A lot of people have said yes.”

U.S. courts “have stood up to attempts to violate human rights,” Fife said. “The Border Patrol and (Immigration and Customs Enforcement) doesn’t know what to do with all these people. The Border Patrol is a force of 23,000 agents, and they can’t deal with all of this. The faith communities aren’t whining — they are doing the work the Border Patrol can’t quite figure out how to do.”

“We spend a lot of time with these folks, and we know their stories,” he said of migrants. “We know the origins of their high-risk journeys, and what does Trump say? These are bad people and we don’t have any choice but to prosecute. BS!” he exclaimed, using the more colorful term for bovine fertilizer.

Fife called the large number of current migrants “the result of a century of colonialism.”

“We spent a century destabilizing, dominating and stealing from those countries, decimating their communities by the invasion of troops and CIA operations and training their militaries to maintain power in a way that destroyed societies and the economies and communities of all those countries. Now (migrants) realize they have a shot at saving their children.”

“What does it mean to be the church in all this chaos?” he asked the delegation. “I think the answer is simple: We provide care and protection for the most vulnerable people in this border region. The church in Mexico is doing that,” establishing “a series of shelters the whole way up across Mexico. They have done a really good job standing up to the Mexican government. There’s a whole layer of protection and care for people on both sides of the border, including Frontera de Cristo (the Presbyterian border ministry that hosted the delegation). It’s faith-based ministry on both sides of the border.”

Fife said he sees at least one immediate need.

“The gap we need to close is churches in those receiving communities to provide long-term care. There are thousands of people waiting for their immigration hearing, and we haven’t closed that gap yet. But I’m delighted with the church on both sides of the border.”