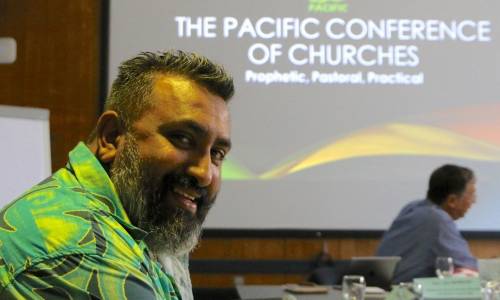 LEXINGTON, Kentucky — Why should people of faith get involved in climate justice?

“A lot of approaches to climate change have been secular, and they have failed in the Pacific,” said the Rev. James Bhagwan, General Secretary of the Pacific Conference of Churches (PCC), a group of more than 40 churches and Christian faith organizations across the Pacific Ocean. “And the question has always been asked why the climate projects there that are secular do not have the impact that people expect to have on paper?”

Bhagwan was speaking from Fiji, where it was already 8 a.m. Tuesday when he began his presentation to an Ecumenical Advocacy Days (EAD) plenary panel that started just after 4 p.m. U.S. Eastern Time Monday. This year’s conference is focused on environmental justice. The panel featured three speakers from areas of the world deeply affected by climate change, and answers kept returning to the need for people of faith to unite in calls for justice.

“If the Christian community, if the faith community stands up, we will see change,” Bhagwan said.

The disconnect with secular solutions to climate change, which Bhagwan said Pacific Island churches have been speaking out about since the earliest days of the 21st century, “before it was the in thing,” lies in the pervasive Christianity and deep spirituality of people in the region.

“The secular agencies do not understand our indigenous cultural language, and spirituality language, and sometimes are challenged by our Christian faith language,” Bhagwan said. “What we’re doing at PCC is finding ways to bring that together through contextualizing our theology and finding ways to help people express both culturally, from an indigenous perspective and from a theological Christian spirituality perspective, what they’re going through. I think that’s going to be key in how we help people respond to this.”

Bhagwan said Pacific islanders see the impacts of climate change in industry that devastates their land and resources — the proposed SpaceX launch pad on the Papua island of Biak being the latest example — with rising sea levels, the impact of climate shifts on plants and animals, and in people uprooted from their homelands to make way for industry or in response to the impacts. He ended his presentation with the view out of a home in a small village that is being relocated. Water seemed to come up to the windowsill.

“We are 33 coastal communities eroding into the ocean,” said Bernadette Demientieff, Executive Director at the Gwich’in Steering Committee in northeastern Alaska.

With her voice occasionally breaking, Demientieff spoke about the impacts of climate change, fossil fuel extraction, and proposed drilling rights on the community and the wildlife in the Arctic National Wildlife Refuge, particularly the Porcupine Caribou herd.

“We are under attack not only by climate change, but we were attacked for the last four years by our own government that is seeking to destroy our sacred land in the Arctic National Wildlife Refuge … the sacred place where life begins,” Demientieff said. “It is so sacred that we do not step foot there. This is where the caribou go to have their calves. But as a mother, myself, I know how special that feeling in that time is, and how you work together with your child, if you bring them into this world, and our animals are not any different.

“We highly respect our land, our water, our animals, our air, our plants. We believe that the Creator blessed us with this area to care take, not to destroy and see what we can get out of it — not to sell it for any amount of money. I like money, but not if it’s going to negatively impact my future generations.”

It was noted several times during the panel discussion that President Joe Biden is holding a Climate Summit with world leaders later this week. Last year, then-President Donald Trump authorized a leasing program for drilling in the Arctic National Wildlife Refuge. The program has been halted by Biden.

“We’re asking the government to buy back the lease sales that are in our sacred lands,” Demientieff said. “We’re asking everybody to write to the congressman, congresswoman, write to the Secretary of the Interior Deb Haaland. This process was done in a very sloppy and disrespectful way to the indigenous people of Alaska, and it needs to be redone.

“We didn’t come looking for a fight. It came to our front door, and I’m just standing up for my children’s birthright.”

Panelist Guido Cortez, Director at the Center for Regional Studies for the Development of Tarija, Bolivia, a partner of the Presbyterian Hunger Program and grant recipient from Presbyterian Disaster Assistance, reflected on the role industry and neo-liberal capitalism has had in climate change.

“We are devouring our nature with the way we permit mass consumption,” he said in Spanish, his words translated by an EAD interpreter.

Cortez said he is often asked what Bolivia can do to mitigate climate change, which he said, “is not a fair question. The indigenous population live in the forest, taking care of the trees with local farming … They don’t contribute to the emissions because they don’t have vehicles, they don’t have industry. Quite the contrary: they produce medicine, fruit trees, and that diminishes the emission of carbon. I think that we need a bigger contribution of the richer countries, USA, when they have the highest carbon emissions, and they need to take responsibility for those emissions, and they need to also contribute to decrease the carbon emissions throughout the world.”

That brought up the question of how to bring the message of the need for change to government and industry. It was addressed in part earlier in the day at a workshop on corporate social responsibility and shareholder engagement that included the Rev. Dr. Gregory Simpson, a member of the Presbyterian Committee on Mission Responsibility Through Investment.

“(MRTI) was established out of the denomination’s belief that church investment is an instrument of mission and includes the theological, the social, and economic considerations,” Simpson said in his presentation.

Answering a question later in the panel discussion, Simpson echoed a recurring theme of the conference that it takes collective action to combat climate change, particularly when dealing with large industrial and governmental institutions. MRTI works with groups such as the Interfaith Center for Corporate Responsibility, which was also a presenter on the panel, and Climate Action 100+.

“Without coalitions of investors with shared information, going into these dialogues, it’s going to be very difficult to move the dial,” Simpson said. “These are issues that coalitions make a difference.”

Ecumenical Advocacy Days participants will have their own opportunity to speak Wednesday, when participants are set to meet with their representatives in Congress to ask for action on environmental justice.

“EAD is a moment for action,” EAD co-emcee the Rev. Christian Brooks of the Presbyterian Office of Public Witness in Washington, D.C. said. “We have the opportunity to engage with our members of Congress and influence legislation that will speak to the issues that have been brought up today. So thank you, again, to our panelists for giving us a glimpse of your reality, what’s going on in your communities, and for calling us to action.”

The panelists living with the harsh realities of climate change all sounded a similar warning:

“We are a prophetic voice,” Bhagwan said. “Look at what has happened to us. It will happen to you.”