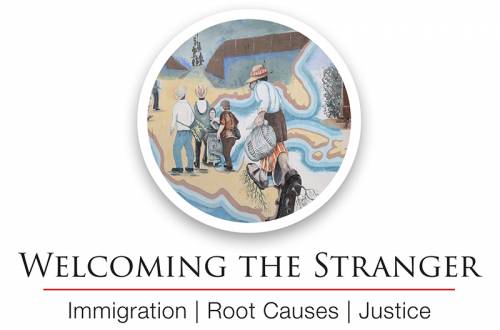 LEXINGTON, Ky. — Speaking about his Atlanta-area church’s work with immigrants, the Rev. Tom Hagood turned to the words of Father Daniel Groody of the University of Notre Dame and Matthew 25.

“Matthew 25: 31-46, which is often titled ‘Judgment of the Nations,’ is a challenging text through which to read these narratives and look at the issue of immigration,” Hagood read, quoting Groody. “In this passage, Jesus said, ‘I was hungry and you gave me food. I was thirsty and you gave me drink, a stranger and you welcomed me, naked and you clothed me, ill and you cared for me, in prison and you visited me. The corollaries to the immigrant experience are striking: Hungry in their homelands. Thirsty in the treacherous deserts they cross. Naked after being robbed at gunpoint by bandito gangs. Sick in the hospitals from heat-related illnesses. In prison and immigration detention centers. And finally, if they make it across, a stranger in a new land.

“They bear many of the marks of the crucified Christ in our world today. In light of Matthew 25, immigrants provide one of the most striking instances of Christ’s presence in our country. And then we can also ask ourselves: we have been lavished with God’s love. Shouldn’t we, in turn, love others?”

Love is far from what most immigrants who arrive in the United States experience, as the pastor of Decatur, Georgia’s Columbia Presbyterian Church and three other speakers on a Wednesday afternoon webinar know. The second edition of “Welcoming the Stranger,” a new webinar series from the Presbyterian Church (U.S.A.) Office of Public Witness and Presbyterian Disaster Assistance took a hard look at immigration detention with Presbyterians and partners who have worked directly with immigrants held at these facilities.

“The U.S. immigration system as we know it today is predicated on false assumptions about its ability to deter people from migrating to the U.S. and all too often has turned a blind eye to the harm and suffering that it inflicts,” Susan Krehbiel, Associate for Refugees & Asylum for Presbyterian Disaster Assistance, said opening the webinar. “First and foremost is the harm caused to those who are detained, their emotional and spiritual well-being as well as their physical health, even the risk of death. But we know they are not the only ones impacted by our immigration detention system.”

Click here to see the immigration detention episode of “Welcoming the Stranger” in its entirety.

Krehbiel talked about the acceleration of immigration detention in the 1990s with the contracting of for-profit prison companies to run centers in remote towns such as Lumpkin, Georgia, 140 miles southwest of Atlanta. That’s where Stewart Detention Center, owned by the  private prison company CoreCivic, holds more than 2,000 people who have come to the United States seeking asylum.

Seeking asylum, several speakers noted, is not a crime. But asylum seekers are treated like criminals, said speakers including Amilcar Valencia.

Valencia is the executive director of El Refugio, a hospitality house that offers meals and lodging at no charge to people visiting immigrants and asylum seekers detained at Stewart.

“Detention centers are not suitable for people,” Valencia said, going on to name a lot of issues with the facility that they have learned about working with people who have been held there.

He enumerated issues such as lack of visitation facilities — only five windows for a center that holds more than 2,000 — inconsistent mealtimes, retaliation for protests, overuse of solitary confinement, labor exploitation, and inadequate healthcare, which Amilcar said became a huge issue during the COVID-19 pandemic. 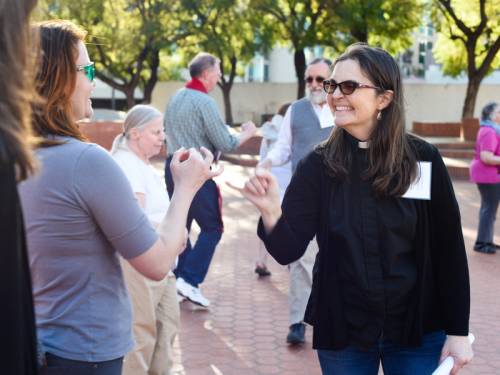 Across the country, the Rev. Heidi Worthen Gamble, Mission Catalyst for the Presbytery of the Pacific in Los Angeles, tells a similar story about Adelanto Detention Center, which has made national news several times for revelations about and protests of its conditions. She said visiting people in the facility was transformational, both because of the stories they heard and the treatment they saw — “just in going through the gate and seeing that these are really prisons, not places to house people.”

The presbytery started working with children when they learned that because of Los Angeles’ status as a welcoming city, there were a lot of unaccompanied minors there. Their initial experience was that treatment of minors was relatively humane, but that changed in recent years.

“The cages that we’ve seen recently, and putting children in a detention center, an adult detention center is abominable,” she said. “Why would we do that to children? We are a wealthy country. We could treat them very, very well.”

Rene Anita Chombeng, Immigrant Organizing Coordinator for the Presbytery of the Pacific, talked about how even when released, immigrants and asylum seekers suffer the physical pain and indignity of ankle monitors and the many indignities and inconveniences they bring, from making it hard to bathe to having to be near an electrical outlet for hours at a time to charge them.

“You release somebody but you don’t actually release that person,” Chombeng said. “Ankle monitors are for criminals. Immigrants are not criminals.”

But that is often the story Americans are told. Worthen Gamble says she’s seen it at moments like the “immigrant caravans” of 2018, which she said drew so much protest but turned out to be mostly groups of a few thousand women and children fleeing violence and repression in their own countries.

Hagood said it is important for people who want to look at immigrants as criminals to put themselves in the immigrant’s shoes and ask what they would do if faced with some of the situations they are running from. Churches, he said, have a role in educating their congregations and communities as to what is happening, and then taking action, whether it is speaking out, working to accompany refugees, or both.

All speakers said they were motivated by the example of Jesus Christ and his love to do the work that they find to be so much more than a job. Hagood said one of the most rewarding things about the work has been getting to know people from around the world. With El Refugio, Valencia said they seek to help people in very difficult situations with compassion and dignity.

“Immigration is really messy, and you really have to just throw yourself into it,” Worthen Gamble said. “But we know as Christians, we are the only ones mandated to welcome the foreigner, the alien among us. And so we seek to follow Jesus more deeply.”

Hagood said, “‘I was an immigrant, and you welcomed me.’ Jesus Christ, I believe, said that.”