LOUISVILLE — The Rev. Dr. J. Herbert Nelson, II, Stated Clerk of the General Assembly of the Presbyterian Church (U.S.A.), and the Rev. Dr. Diane Moffett, president and executive director of the Presbyterian Mission Agency, shared a forward-looking and candid conversation that was aired on the PC(USA) Facebook page on Thursday.

Watch their 41-minute conversation, hosted by the Rev. Dee Decker, acting senior director of communications for the PMA, by clicking on the image above.

Two of the top leaders in the PC(USA) discussed the denomination’s future, next month’s General Assembly, and what it will take for Presbyterians to remain faithful to God’s call. Their conversation was recorded in the Chapel at the Presbyterian Center in Louisville, Kentucky. 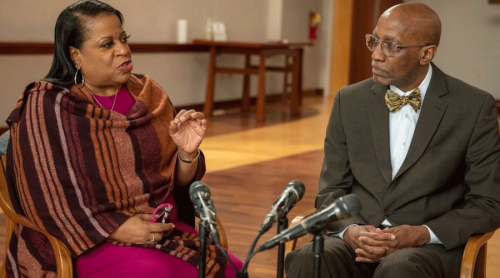 The Rev. Dr. Diane Moffett, president and executive director of the Presbyterian Mission Agency, and the Rev. Dr. J. Herbert Nelson, II, Stated Clerk of the General Assembly of the PC(USA), spoke during Thursday’s airing of “Being Matthew 25.” (Photo by Rich Copley)

Nelson, who’s in his second term as Stated Clerk, talked about all the sacrifices and investments that parents typically make for their children. “There’s something in our love ethic that drives us to do that. I think we as a church have to learn how to love again,” he said. “Not have big barns or the building of great temples … Are we willing to give of ourselves and of the church, even at the risk of losing the church? I think that’s the kind of love that’s required.”

“It’s part of the inner transformation that happens when the human encounters the Holy,” said Moffett, whose nomination for a second term will be taken up during the upcoming Assembly. “We’ve got to embrace spiritual disciplines as a way of life. It cannot be left up to the head. It has to be an encounter, an experience, that moves people to take up the cross. Jesus was very clear!”

“What does it mean to follow Jesus?” she asked. “Jesus was not executed on a Roman cross because he merely prayed. His prayers led him down a path to encounter and engage the principalities and powers that would take away the hope of God’s people … He said, ‘I’m going to give it all for the possibility that somebody will get it.’”

“Jesus never shied away from controversy. He stood his ground. He never said, ‘Oh, this is too much.’” Instead, Moffett said, Jesus said, “I’m seeing you devour your widows’ houses. I’m seeing how your laws are exploiting people. He called it out, and he called it out in such a way not to condemn, but that the world could wake up to a new possibility … God’s kingdom or kin-dom.”

Nelson talked about the work of repair that’s needed within the PC(USA), the nation’s largest Reformed denomination.

“We have to figure this one out. I don’t know if what’s coming before the General Assembly will necessarily resolve everything, nor what dent it will make,” Nelson said. “But I’m clear we have to be singularly focused on what does it mean to open our spirits and our minds to new possibilities going forward that will unify this denomination.” Just as with families, church people “are not going to agree with one another. We should not be walking out the door because we disagree with somebody else,” Nelson said. “We should not reject people because they are different. We should not be in the space of judging people. We are not judges. God is the judge.” 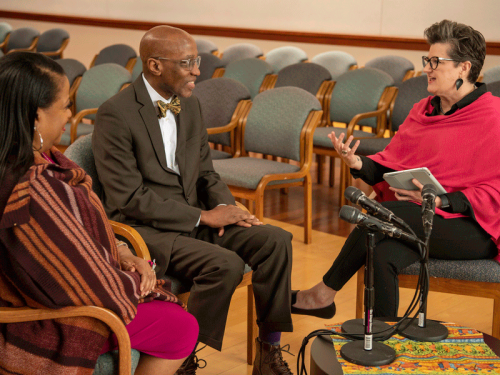 How did we get to the place, Nelson wondered, that “an overture of the General Assembly makes it right for everybody? It makes it right for the church’s stance, but it does not call us to be any less loving a people who may not necessarily believe in that same stance. It’s not the time to walk away and quit the church. It’s time to come back and equip the church to understand even more.”

How many times, Nelson said, “did LGBT persons have to come to the door and knock over and over again? People didn’t quit. They stayed in that fight, and they stayed in that struggle” until the General Assembly and, later, presbyteries, came around on full inclusion in ordered ministry.

“Jesus kept making people mad. He kept saying things people did not want to hear,” which angered the Pharisees and the Sadducees, Nelson said. Jesus would tell them, “Take off those robes and do what you need to do for the sake of faith in God. We have to learn how to do that without throwing the towel down, walking out the door, slamming the door, calling folks names and then saying, ‘I’m out of here.’ This is not Christian, and it’s not a part of what our faith is all about. It’s about perseverance, standing in the struggle and recognizing the choice is not made on the floor of the General Assembly. It’s actually made by God, who gives us life every day.”

For Moffett, the model to adhere to is servant leadership.

“I can say from my perspective with the support of the Stated Clerk we have been plowing that ground to work more closely on particular pieces,” she said. “It’s about the witness of the church to my grandbabies. Will the church be strengthened? We have a leadership challenge here, and I think in order to meet it we have to really think about it holistically.” 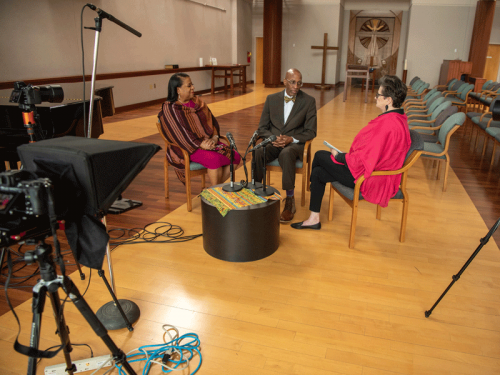 The Chapel at the Presbyterian Center in Louisville, Kentucky, was the site for the taping of “Being Matthew 25,” which aired Thursday. (Photo by Rich Copley)

Commissioners to the General Assembly will consider whether to form a commission to oversee and facilitate the unification of the Office of the General Assembly and the PMA, which are led respectively by Nelson and Moffett. Nelson said that cooperation between the two bodies has been going on for some time.

“We are right now in a major, major piece of reinventing the national headquarters and how we work together,” he said. “Commissioners have a lot of ideas on what the future of the church ought to look like. The other part is the continuing conversation around what does it mean for both of our leaderships … This is going to be a huge General Assembly in many ways.”

The expectation, he said, is whatever difference there may be in carrying out their respective missions, “What is the greatest opportunity to serve the Gospel? To recognize it’s for the whole church and not just for a particular agency, it has to be about the business of building the kin-dom of God, and that’s much bigger than the church. … It’s much bigger than our time in office. What God has given us we could never do for ourselves.”

“It’s the reality of how we worship and serve,” Nelson said to all Presbyterians, “that will make us the church we ought to be.”

Decker thanked Moffett and Nelson as the interview concluded. “I felt like I was just in church,” she told them. “It was wonderful.”

Moffett joined Decker for a live segment Thursday, playing a version of the Matthew 25 hymn “Jesus, Be with Us,” arranged and performed by Phillip Morgan, director of music at Central Presbyterian Church in Louisville, and composed by the Rev. Dr. David Gambrell, associate for worship in the Office of Theology & Worship. Listen to Morgan’s performance here and read a story about how the hymn came together here. View an “extras” segment of the conversation among Moffett, Nelson and Decker here.

The next edition of Being Matthew 25 will air at 1 p.m. on June 16 on the PC(USA) Facebook Page. The guests will be the Co-Moderators of the 224th General Assembly (2020), the Rev. Gregory Bentley and Ruling Elder Elona Street-Stewart.