Make A Donation Click Here >
Home › ‘I am not glad we got it, but I am glad they didn’t get it’ 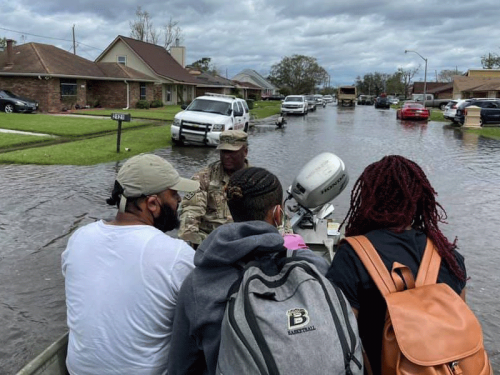 LOUISVILLE — As they are wont to do, Presbyterian Disaster Assistance has sought out the voices of Louisiana residents impacted by Hurricane Ida. The result was Thursday’s half-hour Facebook Live panel discussion hosted by Darla Carter, communications associate for the Presbyterian Mission Agency, and featuring the Rev. Jim Kirk, PDA’s Associate for National Disaster; Richard Williams, interim general presbyter for the Presbytery of South Louisiana; the Rev. Barry Chance, pastor of First Presbyterian Church of Hammond, Louisiana, and Chip Chiphe, a ruling elder at First Presbyterian Church of Scotlandville in Baton Rouge.

“We have checked in with all the churches [in the presbytery]. People said, ‘There are trees down, but I am safe,’” Williams said. “By and large for most members, we weathered the storm with our health and safety.” 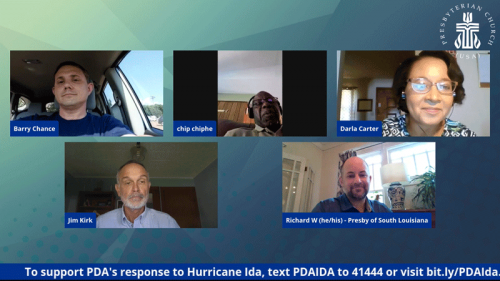 Chance participated in the discussion from inside his vehicle, which he pulled over after having driven 75 miles to purchase food and gasoline. While he’s seen and heard “a lot of anxiety,” people began arriving to help Wednesday evening, about 72 hours following the storm, which is typical, he said. “We are grateful for that.”

With all the downed trees, getting around Baton Rouge is difficult, Chiphe said. But “our church members came out very well. No one was injured. God spared us on that.” Finding food and gasoline is the main task in Baton Rouge as it is in Hammond, he said — “and power, of course, is an issue.”

Chance said Hammond suffered “massive flooding” twice following storms five years ago, when First Church served as a host site for PDA crews. The flooding is worse in more recent years than it was as a result of Hurricane Katrina 16 years ago. “The amount of development and highways have changed the way water flows,” he said. “We are seeing flooding we hadn’t seen before.” 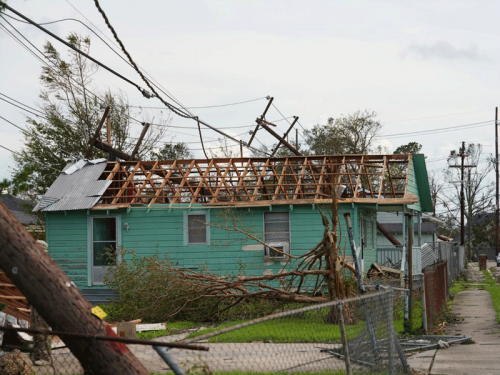 Volunteers are already responding to Louisiana communities in need, Chance said. He said he would prefer “to be going through what we are going through right now, which is not fun, than to see Lake Charles hit again.” That community lost more than 10,000 homes to Hurricane Laura a year ago.

Chiphe agreed. “We were really concerned when we learned Ida would come to Louisiana,” he said. “The thought process was that Lake Charles could not take another one. They are heartbroken and weary. I am not glad we got it, but I am glad they didn’t get it.”

Chiphe said he noticed that during the response to Laura last year, “every time you heard what people were doing, they were going to the white neighborhoods. The north side of Lake Charles is where most African Americans live, and my people weren’t being heard.” He said he “made some calls and developed some relationships and asked people what they needed, and from there things just took off.”

Kirk said he and PDA’s director, the Rev. Dr. Laurie Kraus, traveled to Louisiana in July to meet with the three faith leaders who participated in the panel discussion and with others. “We were incredibly impressed with the work of the presbytery. People are weary, but they do feel supported by the presbytery and the denomination,” Kirk said. He credited Chiphe with making the connection with the impacted community in Lake Charles “so that PDA could bring resources to bear.”

PDA national volunteers began arriving Wednesday to work with the presbytery, “and that work will continue as long as necessary,” Kirk said. “Presbyterians are incredibly generous,” which allows the denomination to partner with the presbytery to continue the work long after news of the storm no longer dominates headlines.

Williams noted that Presbyterians in Lake Charles “have been some of the first to help out and get recovery started even as they are recovering themselves.”

“We know our generosity is only a sign of what God is already doing in our lives,” Williams said. 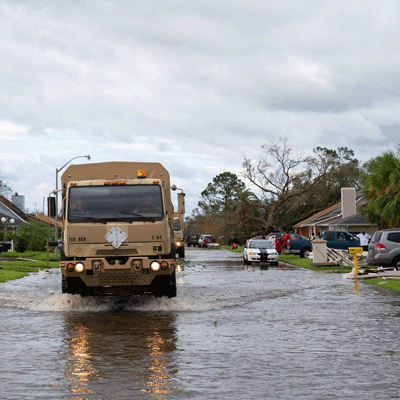 Eighteen states have sent electricians to speed the process of restoring power, Chiphe said. At the church Chance serves in Hammond, 10 AmeriCorps personnel are setting up shop in First Church’s fellowship hall. “We got a generator for the fans and some ice so they can start working,” he said. “The needs for gas, groceries and ice will lessen over the next week as basic services return. But after that, we still have a lot of work to do.”

PDA’s strength has always been long-term recovery, according to Williams. “Several sites are gearing up to host long-term volunteers, and we’ll be working to keep them safe during COVID,” Williams said. “The blue shirts showing up is always important for us.”

Kirk said for now the best thing Presbyterians who want to help can do is to reach for their wallets rather than showing up to work or sending supplies. Money can be used when it’s appropriate and supports the local economy in the place where the disaster occurred, according to Kirk.

“PDA may not be among the first ones in,” Kirk said, “but they will be among the last ones out. We will be there to help with Ida as long as it’s needed.”

Gifts can be made by texting PDAIDA to 41444 or visiting www.bit.ly/PDAIda.

The Federal Emergency Management Agency said that 200,000 residents affected by Ida have already applied for assistance, with another 800,000 or more expected to sign up in the weeks to come.

“And we know the storm kept on going,” Chance said. The Associated Press reported that Ida’s remnant walloped the Northeast Wednesday night into Thursday morning, killing more than 40 people from Maryland to New York.

Chance, Williams and Chiphe thanked PDA and its donors for all they’ve done and all they will do in the region.

“Thank you for coming out to Lake Charles to see what we’ve been talking about for the last three months,” Chiphe told Kirk. “What is amazing to me is that you don’t even have very many Presbyterians there. Most are Baptists, but they have been impressed and thankful for the help we have been trying to get to them.”