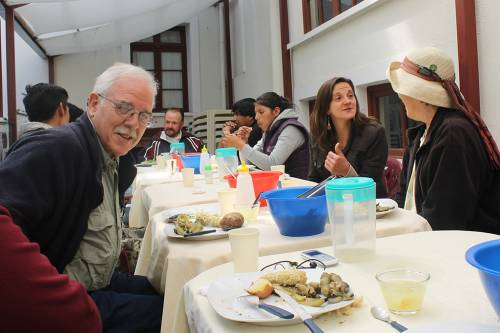 LOUISVILLE – For Don Shaw, there is no such thing as retirement. Although serving a congregation as a teaching elder, he has found work as a volunteer to be complex and different, but also rewarding and challenging.

Shaw is the Presbyterian Hunger Program’s (PHP) Hunger Action Advocate (HAA) for Presbytery of the Cascades and resides in Redmond, Oregon. He describes himself as an advocate for hunger, peacemaking, social justice and a promoter of mission work. He’s very involved with PHP’s Joining Hands program in Bolivia, works in connection with the local food/housing programs in Redmond and also serves as an advisor for the Christian Advocacy Board in Portland. On top of all of that, he communicates the work of the church and presbytery.

Shaw doesn’t believe a hunger issue can be clearly defined. He believes it crosses a number of ministries, keeping him involved with several major issues.

For example, Shaw has found himself working closely with the National Alliance of Mental Illness (NAMI) in its efforts to connect mental illness and faith.

“Mental illness is a source of a lot of hunger,” said Shaw. “Many who are suffering from mental illness are living on the streets and that spills over into the need for churches to reach out.”

“I don’t see clear lines when asked what I do as a HAA. It’s broader than that,” he said. “We need to address the root causes of hunger whether its mining pollution or land grabbing.”

Through PHP’s Joining Hands program, three roundtables have been created to focus on global issues that cause hunger and poverty. Shaw participates in the group focusing on extraction and climate since he and others in Cascades see how these issues impact communities in Bolivia as well as the U.S.

Shaw says many of the successes he’s witnessed have revolved around ecological issues, specifically his work with Joining Hands—Bolivia.

“Several years ago, our Bolivian partners, UMAVIDA, asked us to send letters to the Bolivian government requesting an environmental audit to identify the source and magnitude of the pollution that was so devastating downstream from a gold mine there,” he said. “The Presbytery of the Cascades, as well as many congregations did so. While we cannot know for sure of the impact, the government did stop stalling and proceeded to do the audit.”

Shaw says one of his biggest challenges is effectively communicating his work to those within the presbytery.

“How do you get the word out effectively and get people engaged in the work we do?” he asked. “It’s easy to get sucked into superficial Internet connections. Building relationships with people of common concerns is very important and the church does this well.”

“Most of us who are clergy don’t seek out controversy. It’s not in our DNA,” he said. “So it’s a challenge moving forward without being so controversial that people tune you out.”

“I recently sent out the announcement from PHP about joining the Coalition of Immokalee Workers’ call for a national boycott against Wendy’s and it unleashed a firestorm from a few,” Shaw said. “I’ve responded basically that this is what’s going on and it’s our duty to be informed as Presbyterians.”

Ruth Farrell, coordinator of PHP, explains, “We don’t do advocacy because we like controversy, we do it when we see that a law or a business practice is hurting people we know and the best way to help them is to stand with them to demand changes. When folks meet the farmworkers, see their lives and hear their stories (i.e. build relationships), they understand better when advocacy may be the best tool to end hunger and poverty for working people.”

Shaw says working with the Presbyterian Hunger Program is hugely important and he looks forward to every opportunity to engage with congregations, other advocates and partners around the world.

“No matter what your field of interest is, you’ve got to take the blinders off and see the bigger picture and learn what’s going on elsewhere, broaden your perspective,” he said. “I have no question that Cascades Presbytery would not be involved with the Bolivian partnership were it not for the national program and its role interconnecting with the people and network there.”

Shaw credits PHP and the Office of Public Witness with keeping advocates like himself involved. “if there wasn’t information coming out of these programs, there would not be that certain focused church advocacy that relates to hunger and justice.”

Looking to the future, Shaw believes there are many challenges ahead.

“The government is going to have to address income disparity at some point and that will have an impact on hunger,” he said. “There is no crystal ball to determine what those actions will be but it’s going to happen. If it’s ignored, the social restlessness will continue to grow.”

The Presbyterian Hunger Program currently works with Hunger Action Advocates in 30 presbyteries across the U.S. The HAA position is funded through a matching grant to presbyteries from PHP as a part of educating and connecting Presbyterians to local hunger work in the presbytery and our PC(USA)’s national and global work addressing hunger. Find the HAA closest to your area or give today to support the work of PHP as we work together to bring hope to communities and individuals struggling against hunger.