Rev. Delia Adelina Leal Mollinedo works for the empowerment of women and children 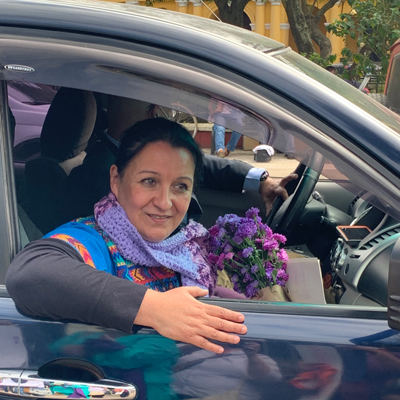 LOUISVILLE — In December, two young women sought refuge at the home of the Rev. Delia Adelina Leal Mollinedo, a Guatemalan human rights advocate. Their living situation was so precarious they felt unsafe. They had stayed with her before when things were uncertain.

Days later, the Guatemalan National Civil Police, in the municipality of Cobán, using a warrant that didn’t even include her name, arrested Leal and charged her with kidnapping, child trafficking and obstruction of an investigation.

Although Article 9 in Guatemala’s constitution says a hearing must be held within 24 hours of an arrest, once she gave a statement, Leal was in custody with no further court appearances.

On Monday she appeared in court for a hearing postponed from December 30, 2020. Members of CEDEPCA and other supporters peacefully demonstrated their support outside the courthouse.

“Delia demonstrated eloquence and grace under pressure, and a stronger-than-ever commitment to work for God’s love, peace, and justice, especially on behalf of and for the empowerment of women and children” said World Mission regional liaison, the Rev. Leslie Vogel, referring to a media interview with Delia and her lawyer on Tuesday.

Since 2007, Leal has served as regional women’s ministry coordinator for global partner CEDEPCA (the Protestant Center for Pastoral Studies in Central America). A Nazarene and Baptist minister in Cobán, she has committed her life to promoting sexual and reproductive health for women from indigenous communities of the Q’eqchi’ y Poqomchi’ region of Guatemala.

CEDEPCA is a training center that provides safe, accepting, creative spaces where women and men from different Christian traditions can deepen their faith while they learn to enhance their ability to confront the issues most affecting themselves and their communities.

“Women in Central America and Mexico live in a patriarchal, violent and oppressive system at all socioeconomic levels,” said Judith Castañeda, CEDEPCA’s director. “Central America is fragile, and Guatemala is one of the most vulnerable countries.”

In 2020, 99,565 Guatemalan women and girls 19 and under became pregnant, many as the result of rape. CEDEPCA works to empower girls in new ways. Alta Verapaz (Cobán is the capital city) has one of the highest levels of pregnancies in teens and girls: 11,103 in Alta Verapaz. That’s compared to the department where half the country’s population lives, Guatemala City, 8,507 pregnant teens and girls in 2020.

One CEDEPCA course on healthy relationships called “It’s Marvelous to be a Woman,” teaches girls and young women that they, like boys, are created in the image and likeness of God. That, unfortunately, is a new concept for women and girls. They are taught that men were created in God’s image and women from a man’s rib.

In the days following her arrest, Leal became the victim of smear campaigns and public stigmatization in local, national and social media. News of the case has been filled with inaccurate information, which has only contributed to an atmosphere of stigmatization around the case.

One of the organizations advocating for the pastor is Front Line Defenders, an international organization founded in Dublin that provides rapid and practical support to at-risk human rights defenders with the specific aim of protecting people who work non-violently for any or all of the rights enshrined in the Universal Declaration of Human Rights (UDHR).

In a statement, the organization said, “Front Line Defenders is deeply concerned about the detention and fabricated charges against Delia Adelina Leal Mollinedo, which appear to be directly related to her work defending human rights, in particular children’s and women’s rights. Front Line Defenders condemns the consequent stigmatisation (British spelling) of the woman human rights defender by the media and social networks.”

Front Line Defenders asked that every measure be taken to guarantee the pastor’s physical safety and integrity and “guarantee that all human rights defenders in Guatemala, in development of their legitimate activities, including the right to protest in defense of human rights, can operate freely without fear of judicial harassment.” 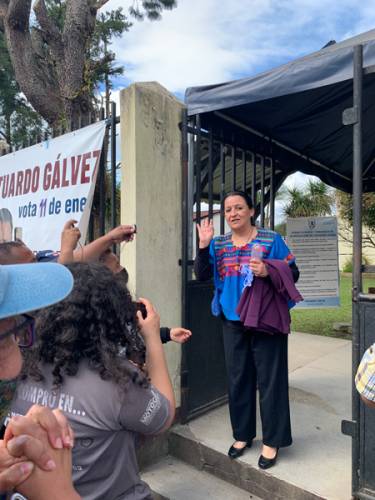 Peaceful protestors stood in solidarity outside the courthouse in Cobán. (Photo by Pamela Líquez, CEDEPCA)

The Vásquez-Leal-Mollinedo family issued a statement saying their confidence and trust since the beginning of the process is placed in God.

“Delia, our Linita, is a strong woman, valiant and full of the courage needed to confront this situation without losing her essence,” the family said. “We are very aware that Justice has its procedures, which we respect, hoping in/waiting for a favorable resolution, as we know is appropriate.”

Comments and reflections by Leal and an interview with Leal’s attorney are available on Facebook at the following links. 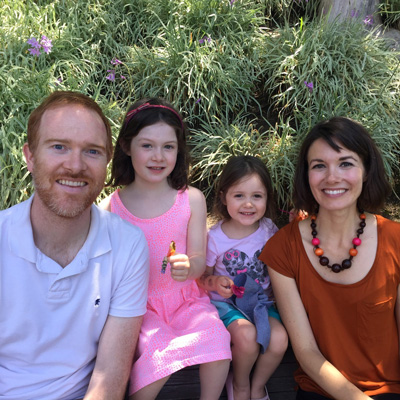