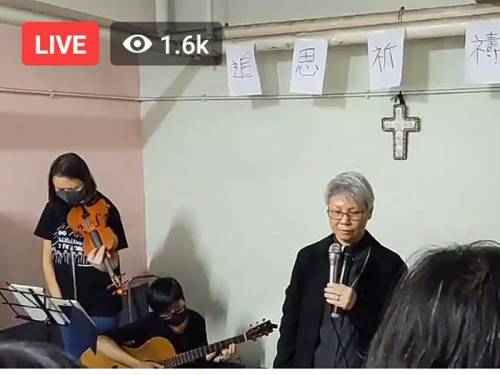 The Rev. Phyllis Wong prays during a memorial service for the young student who died. (Photo by the Rev. Judy Chan)

“Therefore do not worry about tomorrow, for tomorrow will worry about itself. Each day has enough trouble of its own.”  (Matthew 6:34)

LOUISVILLE — Hong Kong may have reached the boiling point after three days of the worst violence since the conflicts began.

“The latest round of violence was related to protests on the death of a young university student last week. He had fallen from one story of a parking garage to another in the early hours of the morning,” she said. “He underwent surgery, was in a coma and finally passed away. May he rest in God’s eternal peace.”

“The student was near where some protests were going on and tear gas was used,” she said. “But we are not sure when he entered the garage or whether he had been at the protest beforehand. The details are still being investigated. The response from emergency crews and police are also not completely clear.”

Chan said the student’s death sparked outrage among protesters who accused the police of murder and cover-up. In retaliation, protesters created a citywide action to paralyze the transportation networks, close schools and businesses, and vandalize shops with mainland Chinese connections. During a confrontation between a policeman and a young university protester, the student was shot by police in the abdomen. Videos began to circulate immediately that appear to show the student was unarmed. The young man was taken to surgery in critical condition with injuries to his kidney and liver. Although it appears that surgery saved his life, he remains in intensive care.

The policeman who shot the student has been “doxxed,” Chan said, meaning his personal details have been posted online. His family has received death threats.

In another tragic incident on the same day, a construction worker who confronted protesters was set on fire. He is in critical condition with extensive burns to his body.

Chan said the churches have tried to be peacemakers and witnesses of God’s love. Some ministers, including her own from Kowloon Union Church, attended a memorial service at the parking garage where students gathered to remember the young man who died.

“They prayed with those who were there, trying to bring God’s comfort and care to the grieving. Later, however, at the site where the other young man was shot, some protesters had run into a Catholic church nearby to escape police,” Chan said. “Some churches have opened their doors to all who need help during this time.

“Usually the police will not enter the church premises as a sanctuary space of sorts. Yet, this time they did enter and arrested some protesters,” she said.

According to Chan, the churches have been criticized by both sides – for not doing enough to support the protesters on the one hand, and for encouraging protesters to do even more violence and illegal acts by not condemning them on the other hand.

The ongoing conflict is entering its sixth month.

The protests began on June 9 over a proposed law that would allow the Hong Kong government to send persons charged with certain crimes to mainland China for prosecution. The protests grew out of an incident involving a Hong Kong citizen who is accused of murdering his girlfriend while in Taiwan. He came back to Hong Kong and there is no method to have him extradited to Taiwan since there is no agreement between the two places.

In response, the Hong Kong government proposed to amend its Fugitive Offenders Ordinance to allow extradition even to places with which they have no legal agreement and finally dropped the proposal all together.

But since the initial protests began, demands have broadened to include an independent inquiry into alleged police brutality, a call for the resignation of Hong Kong leader Carrie Lam, and the demand to drop riot charges against protesters.

“Now, if you think this is all shocking, yes, it is,” said Chan. “We don’t know when the protests and violence will end or how we can resolve this conflict. Please pray for Hong Kong that we might find a way out of this painful and difficult situation. Both sides — government and protesters — seem unwilling to budge on demands or response. We are stuck at the moment.” 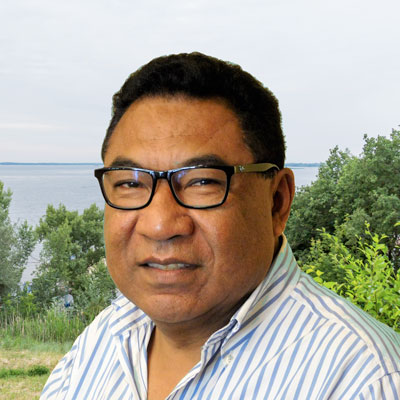