Congregation looks beyond building for strength 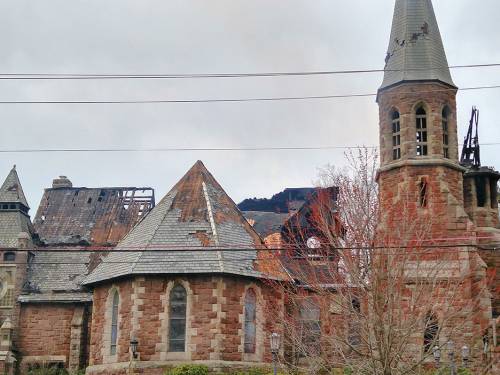 LOUISVILLE — For over 140 years, First Presbyterian Church was the centerpiece of historic Englewood, New Jersey. But that all changed on March 22, 2016, when a fire broke out, leaving significant damage to the sanctuary, destroying original stained-glass windows and causing the roof to collapse.

“The sanctuary was gutted and it took us months to get the smoke and water damage out of the rest of the building,” said pastor Rich Hong. “Every carpet, blind, curtain and ceiling tile had to be replaced. But the building is cleaner than it has ever been.”

Hong says they renovated the church gym to serve as temporary worship space and expect to be there for several more years. The architect for rebuilding the sanctuary served as project manager for the renovation of St. Patrick’s Cathedral in New York City.

“We resolved that life would go on as normal and the rebuilding is simply something we are doing while we run our church,” said Hong. “We were going strong before the fire so why should the fire stop that now? All we did was move worship locations.”

In the meantime, church growth is on the upswing. Since the gym is smaller than the old sanctuary, the church added a 9 a.m. contemporary worship service on Sundays and it has succeeded in bringing in new families.

“The additional service is something the church hasn’t had in 50 years. Our attendance is up and attracting families that don’t even realize there was a fire,” added Hong.

The temporary worship center has also given staff an opportunity to experiment.

“We’ve started livestreaming our worship services so the gym makes it easier to wire up new electronics,” he said. “We’ve installed a better A/V system, a camera for livestreaming, internet connections; all of the things that are easy to do in the gym. It’s like a laboratory for what we will do in worship once we get into the new sanctuary.” 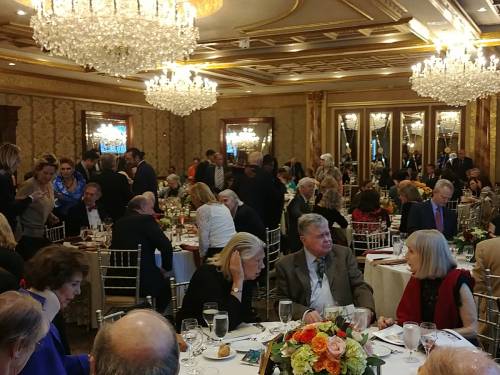 More than $100,000 was raised at a fundraising gala for the church last week. (Photo by Richard Hong)

Last week, the church hosted more than 300 people for a fundraising gala. The “Spark Hope” Benefit Dinner and Silent Auction was held in the Township of Washington, New Jersey, an opportunity to not only raise needed funds but recognize people in the community that have assisted the church in its recovery efforts.

“A majority were not members of the church. It was an event to celebrate our community ties,” said Hong. “The event raised more than $100,000.”

The event emcee was Brandon Tierney, the well-known CBS radio sportscaster, who, along with his wife, are members of the church. During opening remarks, Tierney spoke of the “spirit, resolve and tenacity” of the congregation in the face of “too much adversity.”

Tierney told of how he and his wife struggled to find a church home, walking into what he characterized humorously as “anything with a cross.” He said, “We felt the soul, the purpose of the [Englewood] church the moment we stepped into it.”

Tierney compared the church’s journey to raise funds and rebuild to “game day” in sports.

“The fire was out of control. This is our tunnel. This is our game day. This is what we can control,” he said. “Let us connect with the future generations to continue the legacy of First Presbyterian Church of Englewood.”

U.S. Senator Cory Booker sent a written statement calling the church “a symbol of fortitude in the face of adversity.”

One table at the benefit was occupied by members of the Englewood Fire Department. Firefighters were asked to stand and received a standing ovation and applause.

While battling the blaze, firefighters found a Bible inside the damaged building and brought it to the gala, presenting it to the church. Englewood Mayor Frank Huttle III held up the Bible and said, “If anyone questions the existence of God, look right here.”

“This is the faith of your pastor, that in the midst of the fire, the ashes, he spoke of the spirit, a new beginning. This is what he and you have delivered to the community,” he said. “Every rabbi, every priest, everybody who had a building reached out. It was the spirit of God. God bless you and thank you. Now let’s hold the pastor accountable and get the sanctuary rebuilt.”

Hong received a standing ovation when he took the podium and spoke of the church’s long history in the community while many other businesses in the area had long since closed.

As the church looks to rebuild, Hong says the design will take on two aspects. The exterior of the sanctuary will be restored to look as much as it did before the fire to better mix with the town’s architecture. The inside will be different.

“We would prefer a classic design that is flexible and equipped in the most modern way possible,” said Hong. “We can’t imagine building a sanctuary that is not fully A/V-equipped. Why would you not look to install the latest technological capabilities in a building that is classic in its design?”

Hong says that after the fire, the congregation made a few resolutions, resolving not to cut back on mission giving and activity and not allow reconstruction to “suck up all of their energy, time and attention.” He adds they’ve been able to do that and more.

“Even our members have remarked that they are experiencing church differently,” he said. “They thought they loved the building, but have realized they love people more.”