by the Rev. Magdalena I. García | Special to Presbyterian News Service

Hailing originally from multiple Latin American countries, their journeys are different. But they are united in their faith and in their desire to proclaim the liberating gospel of Jesus Christ with a Reformed and Presbyterian flair.

The theme that brought more than 150 women together this time was “living from hope to hope” (based on Romans 5:1-5). The Rev. Dr. Marielis Barreto Hernández, pastor at Primera Iglesia Presbiteriana in Aguada, Puerto Rico, and keynote speaker for the weekend, challenged conference participants to remember that although “the church is an agent of hope, far too often the church has been an accomplice in spreading hopelessness.”

One way that MHLP tries to bring hope to desperate situations is by asking women to take concrete actions in response to injustices. This year two resolutions were approved: one in favor of immigrants (also approved by organizations including the Hispanic Latino Presbyterian Caucus of the Synod of the Northeast ) and another advocating for the people of Cuba.

“We denounce and condemn the inhumane illegal abuses that Florida Governor Ron DeSantis and Texas Governor Greg Abbott have recently committed against innocent, decent human beings, asylum seekers who happen to be immigrants from Latin America, and to whom said governors have been inhumanely using as political pawns,” reads the first resolution. The document also calls on the church to “acknowledge, respect and joyfully welcome Latin American immigrants as people in good standing before God and the human race,” and it reminds us that Jesus, who himself was a refugee and an immigrant in Egypt, said, “Truly I tell you, just as you did it to one of the least of these who are members of my family, you did it to me.” (Matthew 25:40).

The second resolution approved by delegates encourages solidarity with the people of Cuba and urges “a stop to violence against women, minors and any person peacefully protesting to demand their civil rights.” The document recognizes that the Cuban people “for more than six decades have borne the heavy yoke of a double blockade by the United States (economic embargo) and the Cuban government (political embargo).” Furthermore, it calls on the Presbyterian Church (U.S.A.) “to raise its own voice in favor of the Cuban people, condemning the economic isolation and the political repression, and to actively work in the pursuit of social justice through its councils (presbyteries, synods and the General Assembly), program agencies, educational institutions and ecumenical and interfaith partners.”

The three-day conference offered workshops on spiritual disciplines such as prayer, drawing, music and movement, as well as leadership skills and a presentation on mental health care. Several church agencies, program offices and mission projects supplemented the program with offerings in the exhibit hall, including Beth-El Farmworker Ministry Inc., in Wimauma, Florida, and Puentes de Cristo Presbyterian Borderlands Ministry in Hidalgo, Texas. A special offering was raised to benefit these two ministries that lift up immigrants, and a gift card offering was also given to support the mission projects of El Buen Vecino Presbyterian Church in Kissimmee, Florida, and El Redentor Presbyterian Church in Oviedo, Florida. 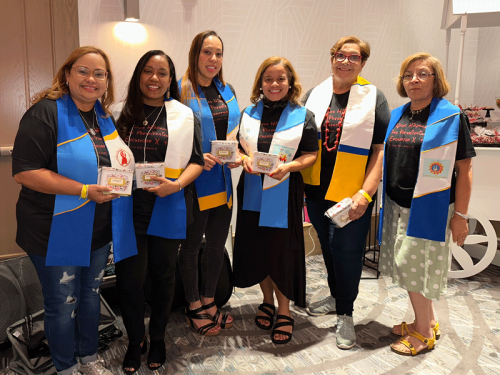 The new officers elected and installed at Encuentro to serve for the 2022-2025 triennium are:

The first Encuentro was held in 1995 in Albuquerque, New Mexico. MHLP was established in 1998, at Encuentro II in San Antonio, Texas. For more information on the history and work of MHLP or Encuentro, go here.