Struck down but not destroyed by massive storm, relief assessment underway

Presbyterian World Mission contacted mission co-worker Cindy Corell, companionship facilitator with the Presbyterian Hunger Program’s Joining Hands initiative in Haiti since 2013. In her work, Cindy assists Haitian partners in advocating for small farmers. Through the eyes and ears of her friends on the scene, Cindy shares about Hurricane Matthew’s unwelcome assault upon Haiti and the resolve of the amazingly resilient people she’s been sent to serve. At the time of this posting, Hurricane Matthew had reportedly killed at least 25 people, most in Haiti. 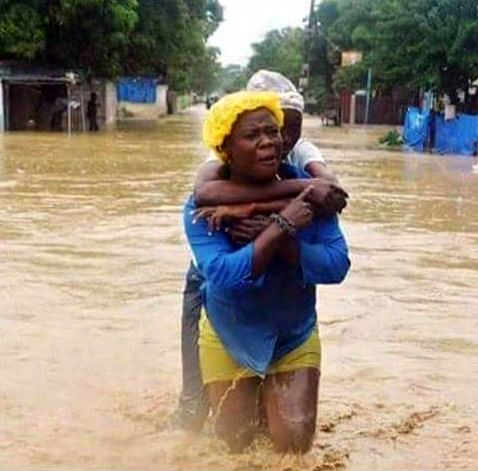 Flooding, mudslides and risk of cholera remain concerns as the people of Haiti begin the long process of rebuilding their lives after Hurricane Matthew. (Photo courtesy Lutheran World Federation)

STAUNTON, VIRGINIA — God puts you where he wants you, my sister tells me. And this week, when a massive hurricane landed on vulnerable parts of Haiti, I was in Virginia finishing up my interpretation assignment. And though I felt guilty for being in a safe home under sunny skies while people I love worried and prayed and fought for their lives and others, I am grateful I was not one more soul to worry about. And, I am a facilitator working with a Joining Hands network of amazingly strong and extremely capable Haitians. Our network, which predominately works in advocacy, has grassroots farmer organizations all over Haiti. I am in awe of their work. And though I don’t know I would be a lot of help during the storm response, it was tough not being close enough to know what was going on.

My primary connection has been through social media and a few phone calls. Most of the people I know and love are in Port-au-Prince, which has not been hit too hard. But people are helping one another, and a number of ministries, local and foreign, are struggling to get help to where it is needed most.

It took a while to connect with people from Cherident, a community where I lived my first month in Haiti. The telephone towers are down, there is little or no electrical current and there is a lot of damage—especially to homes and crops—but no deaths. Thank God! I feel better knowing Papa Luc and my Haitian family there is safe.

With that said, I, like my Haitian friends, lean on my faith in God. The damage done is far less than what could have been done. Prayer works, and I am grateful for all the prayers and thanksgiving for the people of Haiti.

Southern peninsula in the eye of the hurricane
Because the southern peninsula has been hardest hit and communications are not yet in place, we wait for guidance as to when and where to send relief.

Nicossa Paulemont, general coordinator of our network organization KPGA, and others in the organization have been working since the weekend preparing for the storm and helping out as needed. We don’t have a lot of details because there is no phone service. Our prayers especially are with KPGA and the people it serves.

The U.S. Agency for International Development has deployed the USS George Washington, bringing major relief supplies and carrying almost a dozen helicopters. A temporary dock also is on the way, as well as the USS Comfort.

Jeremie is a city on the tip of the southern peninsula of Haiti, in the department Grand Anse. All of this department (similar to a state in the U.S.) was directly under the eye of Hurricane Matthew as it chugged over Haiti. Called the “City of Poets,” Jeremie also is home to Konbit Peyizan Grand Anse, or the Peasants Work Group of Grand Anse, one of our Haiti network’s grassroots organizations.

ActionAid Haiti reported that as of Monday evening as the storm picked up, dozens of people went into temporary shelters. This is critical to saving lives there. Though we do not have details from the region because internet and phone lines have been cut by the storm, we know many, perhaps most, structures have been destroyed or at least lost their roofs.

Grand Anse already is an extremely vulnerable part of Haiti. It is furthermost western part and a relatively thin peninsula, 25 to 30 miles across. Jeremie requires bridges to cross four rivers on the main road, and the storm washed at least one of those bridges away. Most people in the city live along the water, the Bay of Gonave, or up in the hills toward the center of the peninsula. Those near the water risked 7- to 10-foot storm surges, and those on the hillsides risked mudslides.

The morning after Matthew
Thank you all so much for covering Haiti and her beautiful people with prayers and all other good thoughts!

As expected, the southern coastline absorbed the brunt of the storm. Most houses from Les Cayes to the tip of the southern peninsula are gone. But good warnings meant that a lot of folks were able to get to safer spots. We don’t have a good idea of how many lives are lost, but I am certain it is fewer than would have been. So thank you again for prayers.

And the work that was done to get the people to safety—all by Haitians. It will be a task for international rescuers to get down that way—it will require helicopters or small planes, in fact.
So once again, the people of Haiti are helping the people of Haiti and doing great work. When you start seeing stories of the “heroes” from organizations, don’t believe they are the only ones.
The first responders are the locals going door-to-door, driving vehicles in rough terrain or carrying disabled people on stretchers or old doors.

God bless them all as they continue to pull themselves out of the shelters and into what must be a horrifying sight of empty wet places where houses stood and all that debris.

God love them as they continue to help one another and offer prayers and songs of praise to the Great Master.

What help is needed?
Everything. Food, first-aid supplies, blankets, flashlights, tents. The list could go on. But the most important thing from now until the situation is stabilized will be clean water.

The secondary disaster will be cholera reactivated in places all over Haiti. I can’t emphasize this enough. Whenever there is a heavy rainstorm, the cholera is dredged up. It is transmitted through unclean water sources, and then can be transmitted in person. It can kill within four hours. And the only protection is clean water and clean hands.

Stronger together
That’s the good news. Ansamn ansamn, nou pi fo! Together, together we are stronger! That’s one of the best known Haitian proverbs. As much as I fear for the people of Haiti, they grieve for one another. This is why is imperative that we as foreign mission co-workers and mission helpers must listen to the people of Haiti and accompany them in both relief and later in development help.

—–
Financial support for disaster relief can be provided through Presbyterian Disaster Assistance. Please designate gifts to “Hurricane Matthew” when you give online or by mail. If mailing in your gift, make check payable to Presbyterian Church (U.S.A.), write “Hurricane Matthew DR000148” in the memo line and mail to Presbyterian Church (U.S.A.), P.O. Box 643700, Pittsburgh, PA 15264-3700. Donations should be made as quickly as possible.