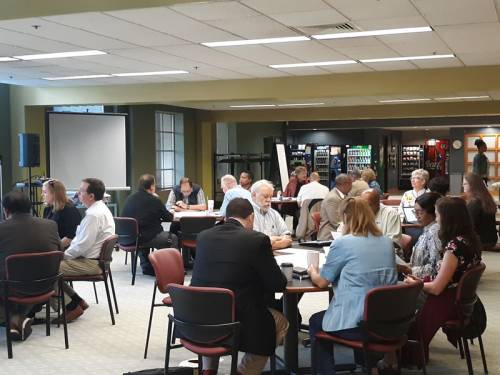 About 35 Presbyterians and ecumenical leaders are in Louisville through Saturday for the “Healing the Nations” conference. (Photo by Mike Ferguson)

LOUISVILLE — Ecumenical leaders who are gathered in Louisville through Saturday are exploring how God continues to call the church to be a faithful witness, even during the current troubled times.

The “Healing the Nations” ecumenical conference, being held at the Presbyterian Center and attended by about 35 people, honors the life and global work of the Rev. Robina Winbush, the former Director of Ecumenical and Agency Relations in the Presbyterian Church (U.S.A.)’s Office of the General Assembly. Winbush died March 12 after returning from a 10-day ecumenical trip to the Middle East.

Leaders from the Presbyterian Church (U.S.A.) have been joined by colleagues from denominations including The Episcopal Church, United Methodist Church, Evangelical Lutheran Church in America, the Moravian Church of North America,  the Mennonite Church USA and others as well as the World Council of Churches, the National Council of Churches and the World Communion of Reformed Churches.

On Friday morning, Presbyterian leaders and their ecumenical counterparts studied John’s vision in Rev. 22:1-5: The angel shows John a vision of the river of the water of life flowing from the throne of God and of the Lamb. On either side of the river is the tree of life with its 12 kinds of fruit, producing a different fruit each month. The leaves of the trees are for the healing of the nations, and nothing accursed will be found there. There’s no more night, so people need no lamp or sun, for God will be their light.

As Winbush herself put it during a 2006 sermon she preached to wrap up an ecumenical conference in Brazil, John’s vision is one of eschatological hope in which “we don’t have to wait for God to be sovereign, because God is sovereign now.” According to Winbush, John writes about “a life-giving river that nourishes the Earth and all of creation,” a river that “cannot be privatized or exploited for the benefit of a few. It’s the free-flowing power of the Spirit in our midst, and we are invited to participate in God’s transforming work of creation.”

In small groups, participants used the Revelation passage to evaluate the present state of ecumenism and lay out possible next steps for the ecumenical movement. Participants then reported their table conversations to the larger group.

The morning conversation turned on this question: What impact should the ecumenical movement be having in the light of our current national crisis?

After a mention or two about what some ecumenical leaders — and more than a few political commentators — see as a constitutional crisis precipitated by the Trump administration, the Rev. Dr. J. Herbert Nelson, II, Stated Clerk of the General Assembly, said that any fight “over who’s in and who’s out” predates the start of the current administration by many years.

“Those are heavy-duty fights, and many of us are still in those fights,” he told the group. “The president may be the poster child of the hell a lot of people are going through, but he didn’t start this war. It is the ethos of the United States which has never changed — that some people are in and a whole lot of people are left out.”

“The strength of the Church is that we focus on the problem, not the person,” Nelson said. “Lester Maddox (a staunch segregationist and the former governor of Georgia) was a person, but racism was the problem. President Trump will leave office at some point, and the reality is that another pharaoh will come up behind him.”

“We are jumping after personalities when we need to be focusing on the struggle” of such current problems as the cash bail system and children unable to complete their high school education, he said.

An Episcopalian conference participant, the Rev. Canon Elise Johnstone of the Diocese of Lexington, Ky., said for her the problem is who gets seen as “other.”

“If I can ‘other’ everyone, I don’t have to acknowledge I am looking on the face of God,” she said. “I have to always remember to not ‘other’ those that I encounter.”

The Rev. Jimmie Hawkins, director of the PC(USA)’s Office of Public Witness, said that ecumenical leaders “should be aware of who’s not at the table.”

“For people of color, this is nothing new,” Hawkins said. “We have never had a president who met our needs completely. White people are astounded and crippled emotionally (by the current administration), but for people of color, it’s business as usual.

“As we do the work of Jesus Christ together, there has got to be diversity,” Hawkins said. “We have to be intentional about reaching out and going to every corner of our communities to make sure every voice is heard.”

“We know we are in danger of losing our ecumenical unity,” he said, “when people go to their respective corners and do their own thing.” 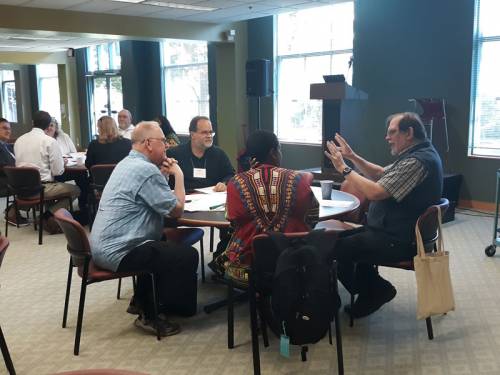 Ecumenical leaders, including the Rev. Chris Ferguson, general secretary of the World Communion of Reformed Churches, at right, shared ideas around tables before reporting out to the larger group. (Photo by Mike Ferguson)

After analyzing the strengths, weaknesses, opportunities and threats to the ecumenical movement, the group turned to a discussion on how the PC(USA) can support the ecumenical movement as it seeks to be relevant. Facilitating that discussion was Dr. Jack Felch, a Presbyterian ruling elder and the executive director of the Lehigh Conference of Churches in Allentown, Pa.

That group of 140 churches “does a lot of social work helping our neighbors,” Felch said. “Most would say we are a social service agency.”

Felch said he hopes that every time he looks in the face of a client “that I’m truly seeing Jesus. I equally hope that whatever they see in me is Christ incarnated to do good things for our neighbors. That doesn’t happen every day, but when it does, it is a joyful piece of what we do.”

The ecumenical conference concludes Saturday with an hour-long wrap-up followed by worship.