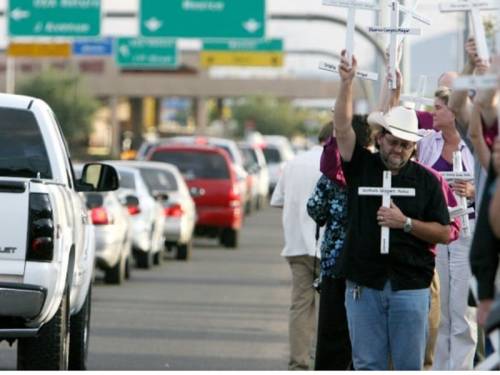 The Rev. Seth Polley, an Episcopal priest, participates in the vigil. (Contributed photo)

LOUISVILLE — On Tuesday evening, the Healing Our Borders Prayer Vigil, held weekly just north of the Arizona/Mexico border, occurred for the 1,040th time.

On its 20th anniversary, the group met to remember those who have died attempting to cross the border, for their families and for the U.S. and Mexican governments to find a better way to a just and peaceful world where no one has to die in the desert.

Things have changed slightly during the time of coronavirus, but the ritual has remained pretty much the same. Since the pandemic began, three or four people, masked and socially distanced, walk down Pan American Avenue in Douglas, Arizona while calling out the names of people who have died and placing a cross with their name on the curb.

On Tuesday, a group gathered on Zoom to read some of the 317 names of people who have died in Cochise County. While they read the names, participants watched the walk live. As is the custom, they were from both Arizona and Sonora. The Zoom group represented 11 states. Judy Plank from Le Mars, Iowa, who was part of the original group, said she was happy to be there for the 20th anniversary, but sad that things had not changed enough in that time.

Another participant, Elena Delgado, said, “Participating in tonight’s vigil deepens my Advent journey into the night with Mary and Joseph, and all those whose names were shouted into the desert night up to the stars.  Their names are flashes of light in the darkness. Jesu Cristo El Bebe, presente!”

Mission co-worker the Rev. Mark Adams has participated for 20 years. 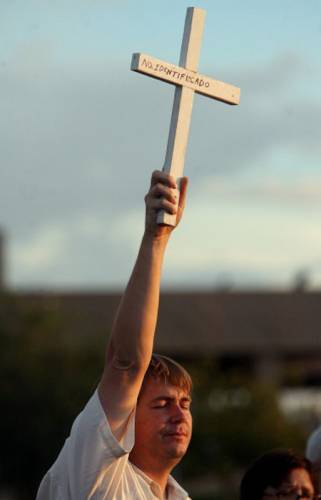 The Rev. Mark Adams, a mission co-worker, lifts up a cross during one of the previous vigils. (Contributed photo)

“We never thought that this simple liturgical act of public prayer would be a direct physical comfort to the families impacted by our broken border, and economic and immigration systems until Araceli’s cousin showed up one day,” he said. “A young woman stopped one day and picked up a cross and with tears in her eyes she said, ‘Araceli was my cousin. She was pregnant. We did not think anybody cared. Can I take this cross to her mother?’ Araceli’s mother ended up coming to Agua Prieta to visit us at the Migrant Resource Center and shared a bit of her grief and gratitude with us and was comforted that her daughter was not forgotten.”

“The vigil is a time to connect with the Divine to pray that our governments might govern with love, compassion and justice for our neighbors,” said mission co-worker Miriam Maldonado. “We remember each week the names of our sisters and brothers who have been greeted with a wall of rejection and death.  The vigil is a strong voice to heal our relationships and to commit to being a welcoming community.”

Adams said it is important we remember human beings are created in the divine image, beloved by God.

“Their lives were cut short in the deserts around us,” he said. “We pray that God’s loving and comforting arms will embrace the mothers and fathers, sisters and brothers, daughters and sons who will not be celebrating the holidays with their loved one; and we commit ourselves to living into the vision of hope, restoration and wholeness spoken by Isaiah.” 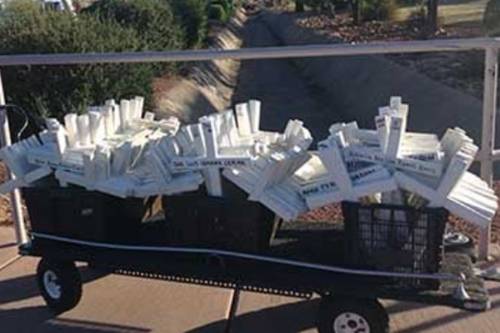 The crosses laid curbside during the vigil are transported in a wagon. (Contributed photo)

Each week, as part of the vigil, the group chooses three crosses, a man, a woman and an unidentified person and they pass their cross, remembering their life, praying for family and meditating in silence. During the pandemic, they symbolically pass the cross.

“It’s a way to go deeper in prayer and to remember that each person who has died is not a statistic but rather a daughter or a son, brother or sister, perhaps spouse, parent or grandparent … created in the Divine Image, beloved by God,” Adams said.

For him, one of the most meaningful parts of the liturgy is when we call the name of Jesus to the four directions holding the unidentified cross and then place the cross in the middle of the other two, which Adams called, “the presence of Jesus in the midst of the brokenness and suffering.”

“Here on the border, as in many places, the hospitals are filling up with persons suffering from COVID, children are struggling to adapt to virtual learning and families who fled extreme violence and poverty have come to Agua Prieta to petition legally for asylum,” Adams said. “They become stuck in Agua Prieta, where they are targets of cartel violence, and people are dying at higher rates than ever in the desert where the paths have not been made straight for the hungry, the thirsty, or the stranger.

The vigil takes place every Tuesday evening at 7:15 p.m. Eastern Time. If you are interested in participating, email Adams at mark@fronteradecristo.org 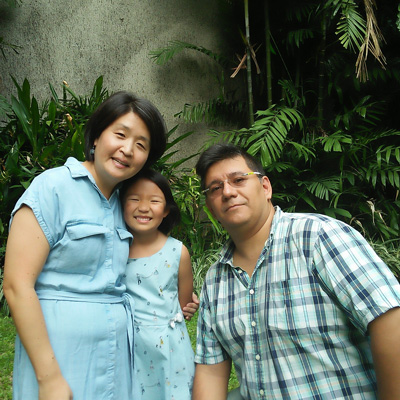