LOUISVILLE — The next time you see the Rev. Jimmie Hawkins, congratulate him on his new title: first-time author.

The Presbyterian Church (U.S.A.) staffer’s book, “Unbroken and Unbowed: A History of Black Protest in America,” will be officially released Tuesday by Westminster John Knox Press.

Writing a book has “always been a desire that I’ve had, and quite frankly, I’m just astonished that it’s come to realization,” said Hawkins, Associate Director of Advocacy for PC(USA)’s Compassion, Peace & Justice ministries.

The 362-page book takes readers on a journey through the history of Black protest in America and debunks myths, such as enslaved people being passive rather than being engaged in constant resistance.

“We know about Nat Turner and a few slave revolts, but there were over 250 slave revolts in the United States, and historians have basically written off slave (ship) mutinies, but there were over 200 slave (ship) mutinies,” Hawkins said. “As a matter of fact, they had to take out insurance on slave ships because there was no guarantee it would reach its shore.”

“Unbroken and Unbowed” also takes on modern protests and controversies, such as Colin Kaepernick kneeling during the national anthem. Hawkins uses the football player’s stance as a vehicle to address the topic of Black patriotism. 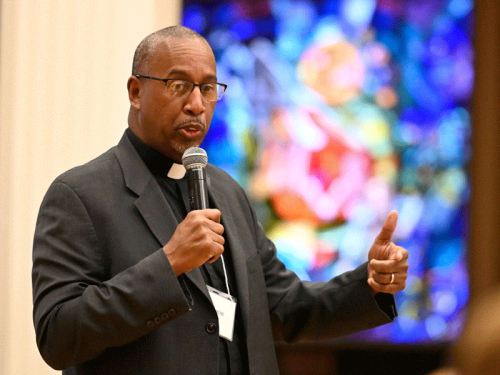 “Unbroken and Unbowed,” a book by the Rev. Jimmie Hawkins, will be available beginning Tuesday. (Photo by Rich Copley)

The question is not “’Is Black protest patriotic?’ but ‘Why are Blacks so patriotic?’” Hawkins said. “We have a level of commitment to this country even in the midst of all of these periods where the country has not been committed to us.”

The book has been endorsed by Rev. Dr. William J. Barber, II, and the Rev. Dr. Liz Theoharis, co-chairs of the Poor People’s Campaign.

“By chronicling the history of Black-led protest in America, Rev. Hawkins both reveals a tradition of struggle for a more perfect union and unmasks the lie that Black protest is ‘un-American,’” Barber wrote.