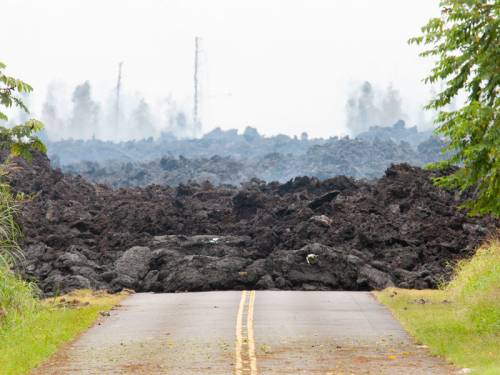 Authorities say health concerns have risen as the lava pours into the ocean, causing an acidic plume of acid gas, steam and volcanic particles. Combined, they can cause skin and eye irritation as well as breathing problems.

“The southeast end of the island needs prayer. I cannot image what they are going through,” said Dana Pagalaboyd, with Hawaii VOAD (Voluntary Organizations Active in Disaster). “They live in what sounds like a war zone, with the constant uncertainty of where the next fissure is going to show up, and how much lava is going to spew out and cover land.”

Pagalaboyd, who is also administrator with Christ Church Uniting Disciples and Presbyterians, said 40 structures were destroyed in one night because of lava flow.

“PDA continues to be in communication with our representative in Hawaii,” said Jim Kirk, PDA’s associate for national disaster response. “We are thankful there has been no loss of life. The situation is dynamic and PDA stands ready to help when called upon.”

FEMA officials say there is a Temporary Flight Restriction in effect through May 26. Boating around the area has also been suspended for most watercraft.

“Prayer is the most that anyone can do for the island right now,” said Pagalaboyd. “Please continue to keep the island of Hawaii close as they continue to recover and rebuild.”

Presbyterian Disaster Assistance can respond to disasters because of gifts to One Great Hour of Sharing.