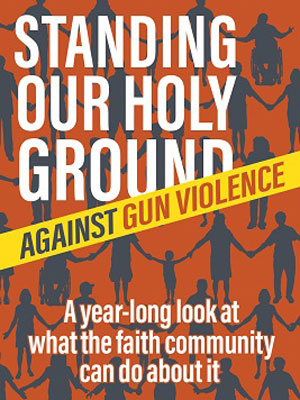 LOUISVILLE — People attending next week’s Presbyterian Youth Triennium on the campus of Purdue University will be among the first to see a new webinar series addressing one of the most important issues of our day: gun violence.

“Standing Our Holy Ground: A Year-Long Look at Gun Violence & What the Faith Community Can Do About It” will be presented by the Presbyterian Peacemaking Program and will feature faith and civic leaders, experts on guns and gun violence and people impacted by the epidemic that took more than 40,000 lives last year.

“Unfortunately, we realized this was an evergreen problem that does not seem to be going away and is not being addressed in any significant and meaningful ways,” says Carl Horton, coordinator of the Presbyterian Peacemaking Program. “There is a need for us to provide ongoing and relevant resources.”

While planned as live, timely events, the webinars will also be archived on the Peacemaking Program website to be available to churches and other groups that want to use them as resources for education and the discussion of issues related to gun violence.

The series will launch with two Triennium discussions titled “Young People and Campuses Stand Up to Gun Violence” at 8 p.m. to 9 p.m. EDT July 17 and 3:45 to 4:45 p.m. EDT July 19. Panelists will include a 16-year old community activist with Generation Z of the Virginia Action Network, a group of youth activists from the Brave Youth Leaders of the Ark of St. Sabina in Chicago, and members of the Purdue University campus security team.

The next installment will be a few weeks later at the Big Tent gathering in Baltimore, where the topic will be gun violence in urban settings. That discussion is scheduled for 8:30 to 9:30 p.m. EDT Aug. 2, following a screening of the David Barnhart documentary “Trigger,” from Presbyterian Disaster Assistance’s Story Productions.

Panelists for the Baltimore webinar include Rev. Cleoda Walker, a Baltimore City Police chaplain who works with the organization “Clergy to Safe Streets Violence Interrupters”; Major Monique Brown, a Commander of the Southern District with Baltimore City Police; and Amy Cress, the Director of Community Engagement for Marylanders to Prevent Gun Violence.

Simon Doong, project manager for the Presbyterian Peacemaking Program, said he has heard a consistent reaction while coordinating panelists and other contributors for the webinars.

“One of the most common things that has come up is the need for faith communities to speak up,” Doong said. “I don’t want to call it an absence or a lack, but … what is being communicated is that faith communities don’t take an active enough stance to address gun violence. So, they’re very excited when I mention the webinar series.”

That lack of action is not for the lack of a policy by the Presbyterian Church (U.S.A.).

“Our church comes up with great policy, and then it kind of collects dust on shelves,” Horton says. “This is hopefully a way in which we’re opening up conversation around already-existing policy of the Presbyterian Church regarding these issues.”

In addition to the impact of gun violence on young people and campuses, future installments of the webinar will feature topics such as race, the LGBTQA community, theology, mental health, suicide, and media.

Horton and Doong emphasize one point: This is an anti-gun-violence project, not anti-gun.

“The language in our policy is always about preventing gun violence,” Horton says. “We don’t talk about taking away people’s guns. We don’t mess with the right to bear arms.

Unfortunately, there are countless examples of gun violence in the United States today, including suicides and one-on-one crimes that take place every day and mass shootings that have grabbed headlines and fueled calls for reform but have resulted in very little legislation.

“Sadly, I wish these didn’t have a shelf life and we didn’t have to keep them on our website the next five or 10 years,” Horton says. “But we recognize the church needs resources, and we need to take a deep dive.”