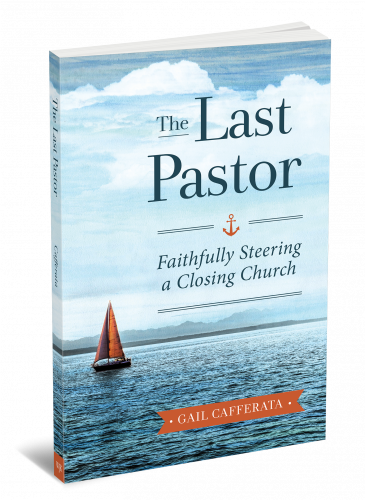 LOUISVILLE — When Gail Cafferata faced closing the church she pastored, her experience brought to mind a million questions about her call, leadership and future. Inspired by her experience and wanting to explore other pastors who were called to serve churches that closed, she embarked upon a sociological study, diving into the experiences of more than 130 pastors in five historically established denominations (Episcopal, Lutheran, United Methodist, Presbyterian Church (U.S.A.), and United Church of Christ). Westminster John Knox Press is proud to announce the release of her book, “The Last Pastor: Faithfully Steering a Closing Church,” which explores the hard-won lessons of the pastors she interviewed about their journeys through church decline and closing.

In “The Last Pastor,” Cafferata mines the results of her study, giving voice to the pastors’ experiences and helping to show others in similar situations that they are not alone. She uses the metaphor of the pastor as tiller of a ship to show that “minding the tiller means bearing hope when the journey seems hopeless.”

“She brings both personal and professional care to understanding the unique role of pastoring a dying congregation,” says the Rev. John L. Odom, presbyter for Community Life for the Presbytery of Mid-Kentucky.

“The Last Pastor” will appeal to readers of WJK’s similar pastoral resources such as “Sailboat Church” by Joan. S Gray and “Loving and Leaving a Church” by Barbara Melosh. “The Last Pastor” is now available from Westminster John Knox Press and other major retailers.

Gail Cafferata received her doctorate in sociology from the University of Chicago and then went on to serve for 22 years as a medical sociologist in universities; the National Center for Health Services Research; Children’s Hospital, Boston; and other nonprofits, writing over 25 academic and government publications. In 1997 she received her Master of Divinity from Episcopal Divinity School and served a Northern California congregation for nine years before it closed.