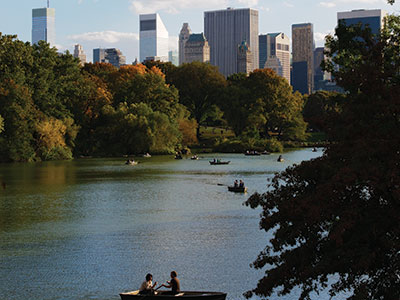 When I was a little girl, the tree in my backyard was the stage for my imagination. I spent hours by that tree, in a parcel of green, in the middle of a medium-sized city. I often didn’t wear shoes—perhaps fitting too nicely the stereotype of a young Kentuckian. I liked the feel of grass under my feet and the gnarled wood against my soles as I stood on my personal platform (a prominent root that surfaced a few feet from the tree). My dad had blackberries, corn, and tomatoes growing against the back fence. All of this somehow created a world where I could block out the noisy traffic of a major street—a stone’s throw from my back fence—and the constant rumble and whistle of trains.

I’ve stayed in the city but connected to the earth, finding places to encounter God, by finding trees and green wherever I can. These safe, peaceful places have given me blessed, private moments to collect my thoughts, utter prayers, and come back to my “center.”

During a particularly difficult time of my adult life, I sought a private corner of a nearby city park to lie prostrate on the ground and gain physical and emotional strength from the earth beneath me. I absconded there each day during a lunch break from my downtown office surrounded by pavement and cement. Sometimes (at the risk of fulfilling a stereotype) I would even hug trees. Literally. Because, like God, they could take all I had to give, while staying rooted, strong, and beautiful.

Connecting to urban green space reminds me of God’s goodness, of hope in humanity’s resilience, of my own strength to make it through.

Not everyone is able to find such spaces, however. Environmental injustice means environmental beauty is available to some and not others. Our faith tells us this is wrong, that God’s creation belongs to no one and is a gift to all. God’s grace was evident in that tree in my backyard, in my Dad’s blackberry bushes growing in the shadow of traffic. It can be evident anywhere a tough weed breaks up concrete and pavement. We as humans thrive where all creation thrives—we have better physical, emotional, and mental health when we are not isolated in a totally “built” environment.

Carol Johnston, an associate professor at Christian Theological Seminary and author of And the Leaves of the Tree Are for the Healing of the Nations, reminds us that the book of Revelation envisions, during the “end times,” an angel showing “the river of the water of life” flowing through the middle of the street of the city (22:1–2). The city, once a place of violence and alienation from God, formed only after the expulsion from the garden of Eden and the murder of Abel, is reunited with God’s natural creation. Under God’s wisdom, Johnston says, natural and human communities belong together.

To embody the vision of Revelation, some have begun dreaming of sustainable, forested cities, urban farms, and renewable energy stations. In these cities, we would find options for convenient and zero-emission public transportation as well as roadway crossings that are as much for pedestrians and cyclists as automobiles. Urban areas would be replanned to create numerous small, walkable communities with easy access to healthy food, employment, and education. Even in the city, there would be grass under feet, the smell of a garden instead of traffic exhaust, and good, clean earth to lie on. 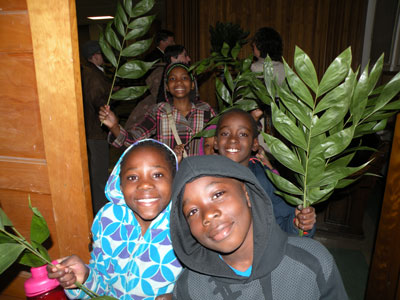 In some cities, this urban “green” movement has already begun. Journalist and author Richard Louv declared in his 2011 book The Nature Principle that “urban is the new rural,” referring both to population shifts and to this effort to make cities more sustainable. “In 2008, for the first time in history, more than half of the world’s population lived in towns and cities,” he writes. And for some of those cities, nature is becoming, in Louv’s words, the “central organizing principle of modern life.”

In Baltimore, a 30-year-old African American mayoral candidate, DeRay Mckesson, is running on a platform of sustainable city planning, green space, housing, and transportation, as well as racial justice. The city of Austin has set the ambitious goal of being carbon neutral by 2020. In Chicago, 2.5 million square feet of city roofs support plant life. Oakland, California, boasts zero-emission buses and a large renewable energy plan that aspires to be oil free by 2020. Boston is recycling trash to power homes. And as far back as 1989, the Greening of Detroit was formed to recover its urban tree canopy by planting a half-million trees. Its Green Corps has hired more than 500 youth to help with trees and learn about urban ecology.

Some Presbyterians are actively taking part in this movement. Nearly 200 Earth Care Congregations are “greening” their operations, lives, and witness. Some are recycling, composting, gardening, and conserving energy. Others are working to address food justice, racial justice, minimum wage, international trade, and other issues that combine social and environmental justice. 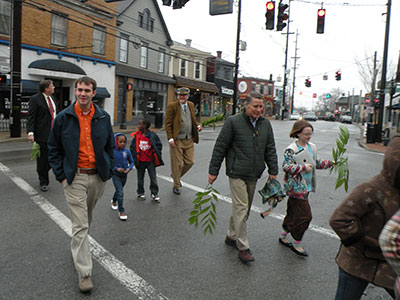 Members of Bardstown Road Presbyterian Church march through Louisville on Palm Sunday, waving eco-palms and witnessing to and for the peace of the city. (Photo courtesy of Rebecca Barnes)

At the same time, many Presbyterians have yet to answer the call to care for God’s creation and ensure that all have access to its resources and beauty. Even ongoing environmental efforts in the church often focus either on natural space “out there” beyond the city or on internal changes, such as energy efficient buildings. If there is wider community engagement, it tends to be through community gardens (a vital contribution, certainly). Rarely, though, are Presbyterians en masse contributing to conversations at city meetings, engaging urban planners, and thinking comprehensively about what it means for the “river of life” to flow through the city.

The Old Stone Church, First Presbyterian, located in the heart of Cleveland, Ohio, is a notable exception. This historic church sits at the city’s urban center, right on Public Square, and the pastor, R. Mark Giuliano, actively participates in visioning and planning conversations with city leaders and other civic partners.

“The church is a great place to generate thinking and opportunities for cross-disciplinary conversations,” Giuliano says, explaining that churches are often already microcosms of the diverse elements of a community. He believes his church can be part of the renaissance that is growing in downtown Cleveland.

Old Stone Church’s involvement is diverse, Giuliano says, including “energy efficient upgrades done at the church, the partnership that helped get a public recycling program up and running, financial support of the creation of a dog park downtown, and the launch of a nonprofit that gives Cleveland’s 14,000 downtown residents a stronger voice in the shaping of their community.” The congregation also hosts an annual spring symposium for the broader community to think about sustainable and just urban planning. 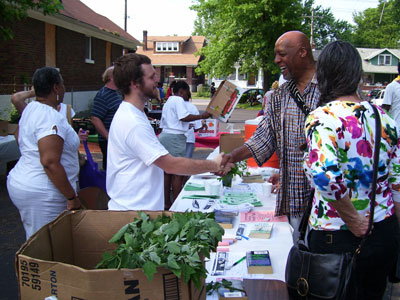 The Presbyterian Hunger Program supports Fresh Stops like this one—markets that provide fresh, local, healthy food at an affordable cost in urban neighborhoods where it is hard to find fresh produce. (Photo by Tammy Warren)

Old Stone’s emphasis on self-development and the leadership of the city’s own marginalized populations is a critical part of this movement.

“What was once called ‘urban renewal’ often made life worse, as planners razed blighted neighborhoods and . . . undermined a sense of community,” writes Louv. Indeed, this displacement of the poor is a real risk for today’s urban green revolution, which often fails to involve top leadership of impoverished people and communities of color. “In the past, as urban residents improved their lot, people with higher incomes moved in, and gentrification often pushed the pioneers out. The same thing could happen as urban gardeners green their neighborhoods. . . . Nearby nature could become a perk for the privileged.” The goal, say Louv and Giuliano, must be a natural community—held in common.

Reflecting on Jeremiah 29:7, where people are called to work and pray for the well-being of the city in order to find their own well-being, Giuliano says that “as we work to heal our city and create health and vitality for it, we create it for our churches and find it within ourselves.” By pursuing a common mission in their wider community, Old Stone Church itself has discovered greater cohesion, joyful worship, and a deeper understanding of Christian discipleship. 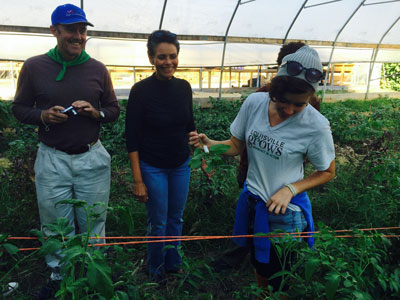 The People’s Garden, a Presbyterian Hunger Program partner, was created in 2011 to offer space for Louisville residents to garden, meet, learn, and grow. (Photo by Tammy Warren)

For Giuliano, that mission is entirely biblical. “In the text for Ascension Sunday, Luke 24:49, we hear that Jesus told people to wait in the city, for there they will be clothed with power from on high,” he says. “It’s important for us to remember that God loves the city and empowers us to join God in loving and caring for it.”

In his book Last Child in the Woods, Louv uses the term “nature-deficit disorder” to explain the health-related challenges and other challenges that children face if their exposure to nature is seriously limited. Activities that help us appreciate the outdoors and connect to the wider creation often are good for our health as well as for strengthening relationships with one another.

A fun and successful summer campaign at First Presbyterian Church in Cottage Grove, Oregon, has been encouraging church members to travel to church in a “different” way—to walk, ride bikes, or carpool. This has been ongoing for a number of years with people of all ages participating, and it’s been good for personal health, community building, and saving carbon emissions that contribute to climate change.

“You can come to worship in your walking or bicycling clothes, and everyone knows that is OK,” says church member and administrative secretary Alison Center. “My one son and I have been doing the bicycling. It can be a motivation to get to church. If I say, ‘Let’s bicycle in,’ he’s more excited.”

Presbyterians live in rural and urban settings and worship in small and large congregations; so earth care ministries are happening across the country in a myriad of ways, each
one unique to its own context. From solar panels to ENERGY STAR certification to Creation Care Sunday to supporting local farmers, nearly 200 certified PC(USA) Earth Care Congregations are “greening” their operations, lives, and witness. To learn more and get involved: pcusa.org/earthcarecongregations

Maintaining a sense of the whole, while doing what we can in our own corner, is integral to any sustainable system. Just as eco-systems require certain niches to be occupied, we can each find our own niche, fill it well, and maintain relationship to the wider whole. Just as each state is asked to come up with its own path to enact the Environmental Protection Agency’s Clean Power Plan, so is each country in the United Nations Framework Convention on Climate Change asked to make its own contribution to honor the historic Paris Accord of December 2015.

Each congregation can ask: If we aren’t involved in the city planning, why aren’t we, and could we be? New energy and new growth—spiritually, physically, emotionally, relationally, and ecologically—exist if we delve deeper into urban greening. Presbyterians can create places in cities that call us back to this vision of “the river of the water of life flowing from the throne of God through the middle of the street of the city.” We can provide grass for children’s bare feet, trees to hug, clean air to breathe, and bike paths to ride.