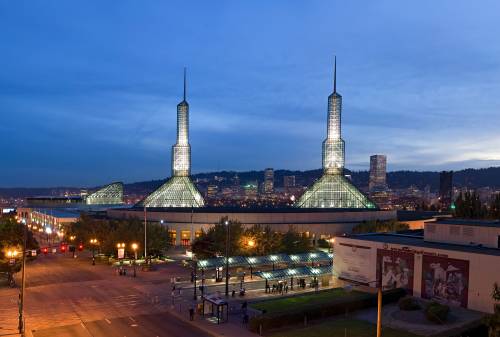 The Oregon Convention Center in Portland. Photo by Fcb981, via Wikimedia

PORTLAND – This month, the 222nd General Assembly (2016) of the Presbyterian Church (U.S.A.) will gather in Portland, Oregon. Commissioners will debate our denomination’s investment in fossil fuels and commitment to creation care, among many other issues. But the theme of environmental justice will hover over the entire assembly, going far beyond the overtures to be addressed in committees.

It begins with the setting. Portland is a city widely recognized for its passion for sustainability. This is a city that captured the nation’s attention last year when protesters suspended themselves by cables from the St. Johns Bridge in an effort to prevent the departure of a Shell Oil ship expected to participate in Arctic drilling efforts. This is a city where 17,000 people bicycle to work every day, or 7.2 percent of commuters—the highest percentage of any large US city. This is a city with farmers markets in every neighborhood and for every day of the week.

As suits a city nestled at the foot of Mount Hood and on the verdant intersection of the Columbia and Willamette Rivers, Portland is also home to what some have described as the most environmentally conscious convention center in the United States. The Oregon Convention Center is one of only two convention centers in the country to earn the LEED Platinum certification, a standard they achieved by going far beyond installing efficient light bulbs and recycling bins. This summer, commissioners will get to enjoy a stroll through a six-acre rain garden, part of a water-reclamation project that saves more than 1.2 million gallons a year. Food waste at the convention center is approaching zero, as every year they donate tens of thousands of pounds of food to the Oregon Food Bank and Blanchet House, a Portland shelter. In fact, they are nearing their goal of 80 percent waste diversion. 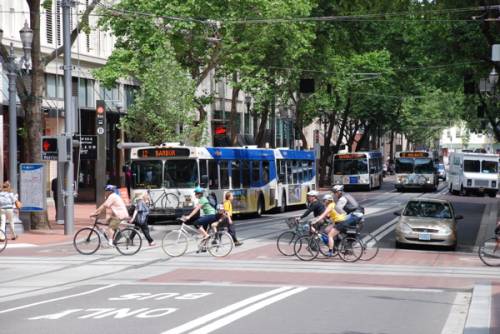 Buses on the southbound Portland Transit Mall (in Portland, Oregon), 5th Avenue, with cyclists crossing on Morrison Street. Photo was taken after MAX light rail tracks were added to the mall but before they were brought into use. Bicycles are also being carried on the fronts of the buses. Photo by Steve Morgan, via Wikimedia

Presbyterians in Portland share these commitments with their neighbors.

Colonial Heights Presbyterian Church, one of three congregations in the Portland area recognized by PC(USA) Environmental Ministries as an Earth Care Congregation, is concerned about energy efficiency and waste, but has also been recognized locally as a pollinator habitat due to special landscaping designed to promote the flourishing of bees and other pollinators. Members of Colonial Heights are continually seeking to improve their practices and partner with local organizations to increase their impact.

A short distance away, Mt. Tabor Presbyterian Church regularly hosts events related to earth care. The Greater Portland Sustainability Education Network utilizes their space to hold virtual conferences with organizers around the world who are pioneering methods for small organizations, including churches and schools, to move to sustainable energy systems. In March, for example, local Presbyterians and their neighbors came to learn about options for installing solar panels on their facilities.

Indeed, environmental education is a priority in many congregations in this part of the country. In an informal survey at a meeting of the Presbytery of the Cascades, numerous congregations reported being currently involved in or recently having concluded adult education on the subject of earth care. Pope Francis’s encyclical on the environment and the work of scholar Ched Myers on watershed discipleship were among the frequently cited resources.

Therefore, no one should be surprised that Oregonian Presbyterians are eager to highlight this faithful stewardship when several thousand of our friends come to the Pacific Northwest this summer. “We are so pleased to welcome folks to Portland and to show off, a little bit, our commitment, as a city, to best ‘green’ practices,” says Beth Neel, co-pastor of Westminster Presbyterian Church and co-moderator of the Committee on Local Arrangements for the assembly. 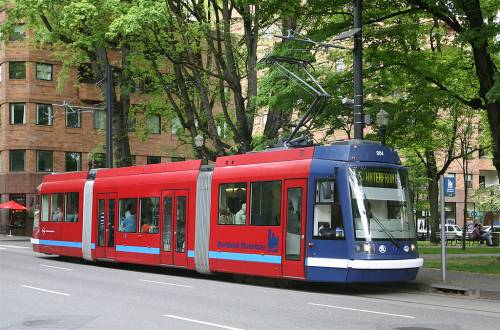 A car of the Portland Streetcar system at the eastbound Portland State University stop, on Market Street at the South Park Blocks. Photo by Cacophony, via Wikimedia

From the moment commissioners arrive they will have the opportunity to participate in these practices. For the first time, General Assembly will rely on public transit to transport the 3,000 or so participants and observers expected to attend in June—a system of light rail, streetcars, and buses. Every person who registers will receive a TriMet pass for the duration of their stay, which will get them to and from hotels, the convention center, and numerous tours and events around the city.

Director of Assembly Operations Thomas Hay points out that using public transit is a matter of integrity: “Several presbyteries are calling on the assembly to take actions about the use and support for fossil fuels. It is an issue of special interest to our youngest commissioners and advisory delegates. If we are going to talk about these issues at the assembly, it is important that we live into that talk by being responsible with our actions every day, including the use of mass transit while we are in Portland.”

Continuing on the theme of integrity, Stated Clerk Gradye Parsons says, “We are called to be good stewards of the only planet we have, so we are making every effort to conserve the use of paper, including going from a print to a digital daily newspaper.” In fact, in keeping with the requirements of the Oregon Convention Center there will be far less paper and disposable material floating around this assembly than in the past.

Attendees can make a financial commitment to environmental stewardship—and help reduce the impact of emissions created traveling to Portland—by contributing to the “Carbon Offset” program in the online General Assembly registration. Funds collected by this voluntary fee will be invested in carbon reducing alternative energy sources.

Many of the optional events around General Assembly will continue the theme—from a bicycle tour of the city to a look at the environmental stewardship practices of the farms and wineries of the Willamette Valley. Some guests will even get a close-up look at some of the tensions and contradictions in the area by visiting the proposed location in Vancouver, Washington, of what would be one of the largest fossil fuel terminals in the world. Portland, after all, is not only home to environmental activists. It is also the northernmost ice-free port in the continental United States with dry-dock facilities that can accommodate the large vessels used by fossil fuel companies. It is also a city with a long history of lumber exports.

Moreover, Portland’s own environmentalism cannot be separated from its racial past and present. Located in a state that, when granted statehood in 1859, forbade African Americans from living, working, or owning property there, Portland is 76 percent white. “Greening” efforts have often resulted in gentrification, displacing both poorer communities and communities of color and creating a more racially and economically segregated city.

These contradictions help explain why the conflict over how best to care for our planet can be so dramatic here.

The debate at the 222nd General Assembly (2016) is bound to be as energetic as ever, but whatever actions are taken, there will likely be a renewed emphasis on the importance of earth care for Christian discipleship. As the PC(USA) environmental policy adopted in 1990 says, “God’s works in creation are too wonderful, too ancient, too beautiful, too good to be desecrated. Restoring creation is God’s own work in our time, in which God comes both to judge and to restore.”

Aric Clark is a member of the 222nd General Assembly (2016) Committee on Local Arrangements. He is a writer, speaker, and Presbyterian minister living near Portland, Oregon.