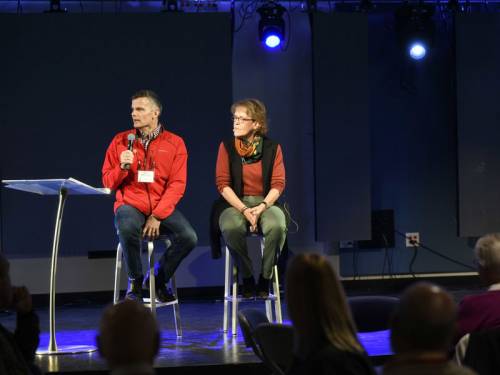 Dr. Corey Schlosser-Hall, executive presbytery for the Presbytery of the Northwest Coast, with speaker Patty Burgin during a 2019 conference. (Contributed photo)

LOUISVILLE — In the midst of the COVID-19 pandemic, the Rev. Dave Rohrer of Emmanuel Presbyterian Church in Bothell, Washington, hosted a Zoom conversation along with several other pastors of the Presbytery of the Northwest Coast.

Together they read an article about a restaurant owner lamenting not only what his restaurant had been like before the coronavirus outbreak, but what restaurants are like now and what they might be like in the future.

According to Executive Presbyter Dr. Corey Schlosser-Hall, the article served as a springboard for pastors to consider what their churches might look like in the future. They began asking questions like, “What do we want to leave behind, and what do what do we want to embrace?”

The ensuing conversation helped pastoral leaders recognize the shift that was occurring for them and their churches was happening to others — and was much deeper than just going back and reopening their buildings.

Recognizing that conversations like this would be helpful for all for leaders of their congregations, Presbytery of the Northwest Coast will host two workshops during its June 11 presbytery meeting, the first presbytery gathering since the virus began.

In the “Deep Shift during COVID-19” workshop, participants will break into chat rooms to answer questions about what God has been doing in the church during the pandemic. They’ll discuss how they’ve seen the gospel transforming what they are becoming during this time and what they might bring with them and leave behind as they move into the future church.

In the second workshop, “Reopening Church Facilities: What’s your plan?” participants will be asked to read presbytery guidelines on reopening. They’ll address required safety and health protocols and what needs to be in place before churches can safely welcome worshipers back into their facilities. This probably won’t happen until July or August, as churches won’t be able to open until the state of Washington is in phase 3 of its reopening process. 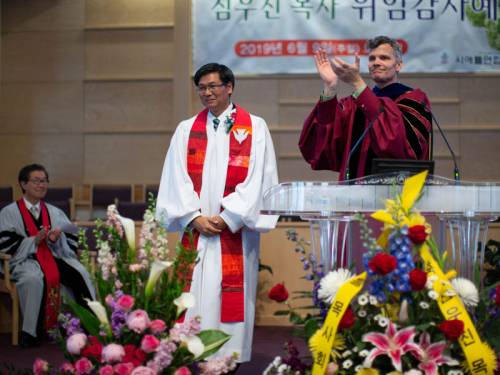 Dr. Corey Schlosser-Hall, executive presbyter at the Presbytery of the Northwest Coast, participates during the installation of the Rev. Woo Jin Shim at United Presbyterian Church of Seattle. (Contributed photo)

During a recent a weekly pastoral meeting held via videoconference, Schlosser-Hall said that church leaders began to recognize that even when they get back together again in their own space, they won’t be able to sing together — even if they have masks on.

They began talking about what it’s like to adapt to what God is doing in the midst of disappointment over all the cancellations — and now dashed expectations of knowing they can’t meet like they used to.

During that time, three leaders in their 30s began talking about what ministry was like in this constantly changing time.

“They described it as being part of God’s scrappiness, and that it was actually kind of fun,” Schlosser-Hall said

For him, and for those present, it was remarkable to hear and see young pastoral leaders adapting to what God is doing.

“It was really revealing to see the difference in expectations of different generations, of how the church manifests itself,” Schlosser-Hall said. “In this shift, we hope to follow Jesus every step of the way.”