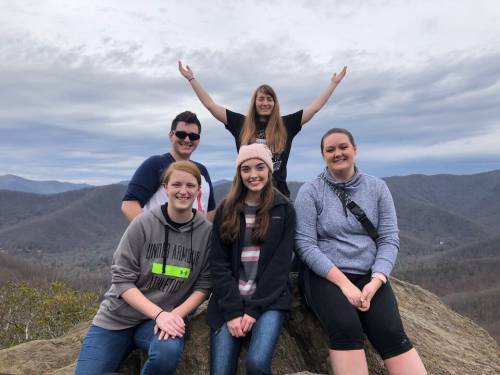 Many of the nearly 1,000 students who attended the Montreat College Conference in January had the proverbial mountaintop experience, including students from the Presbytery of Greater Atlanta. (Contributed photo).

LOUISVILLE — Nearly 1,000 college-aged students and their UKirk pastors and leaders began the new year together at the annual College Conference held last month at the Montreat Conference Center in Monreat, N.C.

Featured speakers for the event included author and founder of the Interfaith Youth Core, Eboo Patel, along with residents and chaplains of the Swannanoa Correctional Center for Women. Patel was a member of President Barack Obama’s inaugural Advisory Council on Faith-Based and Neighborhood Partnerships. Interfaith Youth Core is a Chicago-based international organization that aims to promote interfaith cooperation.

In addition to the featured speakers, conference-goers participated in small group “critical conversations.”

Conversations focused on a variety of aspects around faith and the life of college students. Spirit-filled worship services, which were sprinkled throughout the conference, were led by the Rev. Aisha Brooks-Lytle, executive presbyter of the Presbytery of Greater Atlanta. Drawing from scripture passages Luke 6:36, “Be compassionate just as God is compassionate” and 2 Cor.1:3-4, “Praise be to the God and Father of our Lord Jesus Christ, the God of compassion and the God of all comfort, who comforts us in all our troubles, so that we can comfort those in any trouble with the comfort we ourselves receive from God,” this year’s conference theme was Compassionate Community.

The Presbyterian Mission Agency’s Racial Equity & Women’s Intercultural Ministries (RE&WIM) and the Office of Women’s Leadership Development and Young Women’s Ministries provided scholarships for four young women to attend the conference. Beth Olker, field staff for RE&WIM, said, “One of the goals of the scholarships given by the office of Young Women’s Leadership Development is to put young women in places of learning and in places of leadership.”

Nella Beardall, Laura Cain, Kristen Huete and Emily Isenhower were the four women selected to receive scholarships from the Office of Women’s Leadership Development and Young Women’s Ministries to attend this year’s event. Following are their reflections on the conference:

Beardall, a Junior at Agnes Scott College and part of the UKirk Atlanta group, said of her experience, “The most influential part of the conference was the keynote speakers. The first speaker, Eboo Patel, discussed the value of connections to others with different ideals and religions. He also talked about how people tend to focus on the differences that they have with others. Once people can put those aside, they can work together to better the lives of those around them as a whole.”

Beardall says the other influential keynote speakers were the chaplains and inmates from the Swannanoa Correctional Center. “It was extremely inspiring to hear how the chaplains found their way to working at the facility and then how they were positively affected by the women that they worked with,” she said. “The most inspiring part of the whole talk was when two of the women inmates came to share their story. It was moving that they were able to stand up on stage and ask for acceptance and open ears from a group of college students who may not have understood their background.”

Beardall said hearing their stories made her realize how brave the women must be to have gone through the difficult times and to see how much it has affected their lives for the better.

“The women discussed how grateful they were to be have been incarcerated,” she said. “If they were not (incarcerated) they do not know where they would be today and most likely would not have found their faith.”

Cain, a first-year student at Agnes Scott College and a member of Clemmons Presbyterian Church in Clemmons, N.C., also reflected on the inmates’ impact and Patel’s remarks. Cain says Patel was the first non-Christian she’s heard speak at an event like the Montreat College Conference. 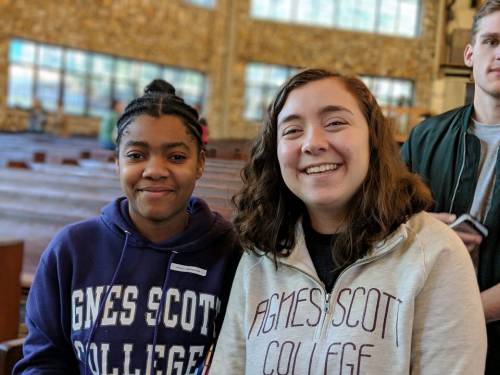 Students from UKirk groups were among the nearly 1,000 people to attend the Montreat College Conference last month. (Contributed photo)

Overall, she said, “this conference made me rethink the way I see my community. I was left questioning where I draw my line for cooperation.  After the conference, I talked to some of my LGBTQ friends about how they felt regarding including non-inclusive people in their communities. It was interesting to hear the perspectives of those who have less privilege than I do on this topic.”

Cain says since the conference she’s concluded that our “canceled culture” — where people are discredited for making one mistake — is not Christ-like. “It is important to forgive others and make an effort to understand their perspective, even if you don’t agree with it,” she said.  “This conference left me asking tough questions that strengthened my faith, which is exactly what I needed.”

Huete, a junior at the University of South Alabama, said, “Rev. Aisha Brooks-Lytle’s energy filled the room each time she got on the stage, and her presentation made the familiar stories from the Bible come to life.  Both workshops I attended were also thought-provoking and informative, particularly the workshop ‘Won’t You Be My Neighbor?’”

That workshop discussed the documentary “The Power of Compassion: Life Lessons from Mr. Rogers.” Huete says discussing this documentary was “a great choice for the retreat.” The workshop made her aware of the accomplishments and wisdom that the late Presbyterian pastor and children’s television pioneer provided to the world through his television platform.

“This retreat helped me to broaden my horizons and become a more compassionate person,” Huete said. “While the leaders of the retreat stated that this conference would not give me all the answers, I feel that it has given me a good start towards finding my place in the world and what is really important in life.”

Isenhower, who had never attended a conference at Montreat before, said her favorite parts of the conference were the keynote speakers and the time she spent growing and reflecting with her UKirk group each night as participants shared about their day. Isenhower is a sophomore at the University of South Alabama. She is a part of the UKrik South Alabama campus ministry at the Presbytery of South Alabama.

“I really enjoyed having conversations with my friends about our favorite part of the day. I liked getting new perspectives and hearing about things I might not have picked up on,” she said. “I think it helped me ultimately grow closer to everyone that was able to attend, but also will help me have conversations with those that were unable to attend.”

“At the end of the day,” she said, “the people in my ministry are some of my closest friends, and spending a week helped us grow as a group and as individuals.”

The four attendees all told Olker how much they learned and how their worldview and faith view were broadened by this conference.

“They each shared, in different ways, the fact that this conference has given them a sense of call to work to build a kinder, more compassionate community in their UKirk communities and their wider campuses, “said Olker.

“Kindness, openness to learning from the experiences of others, and compassion are ideal qualities for all leaders to have, so we look forward to seeing the role these young women play in their communities and their churches,” Olker said. “This gives me great hope for the sort of compassionate community the church can be with young people learning and growing together.”