What if stewardship was a reason instead of a season? 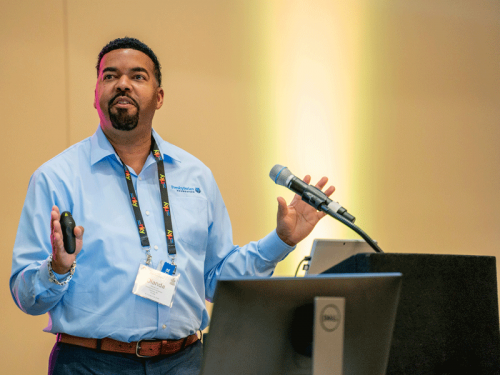 CINCINNATI, Ohio — The averted gaze when a member of the stewardship committee approaches. The neglected pledge forms. The Stewardship Sunday sermon the pastor secretly (or not so secretly) dreads giving.

The annual stewardship campaign is a rite of autumn that must be endured. Right?

Or, could stewardship be about abundance rather than scarcity? What if stewardship was a reason instead of a season?

It can be, but not without creative thought and action, says Olanda Carr, Jr., the Presbyterian Foundation’s Ministry Relations Officer for the East Region. In Monday’s “Creating a Culture of Generosity” workshop at Stewardship Kaleidoscope in Cincinnati, Ohio, he offered a way forward.

When cultivated as a joyous discipline, grateful giving is the church’s theological antidote to the consumerism and materialism of our age. It’s about how we live our lives and spend our money — all year long.

Because, he says, hopefully we’re grateful to God year-round.

Making choices about our giving helps us grow spiritually. One choice churches may want to consider is forming what Carr calls a generosity team instead of the traditional stewardship committee. The team could be chartered by the session and include a member from each program or mission committee to coordinate all storytelling, requests and thanks.

And don’t just put the congregation’s bankers, accountants and financial planners on the team, he cautioned. Include a variety of voices and people, including age and length of membership, around the table.

“You don’t want a band with all the same instruments,” he said.

Sessions can support the generosity team by sharing their own stewardship stories — who taught them to give, for example — and by being the first to pledge. “Leaders lead,” Carr said.

Pastors, naturally, are stewardship storytellers too, but “the best stewardship sermon is one that’s not given during a yearly campaign,” Carr said.

A church’s story can begin with what it does well in the community and world. What difference does it make with its members, in the community and even in the world? It can’t be about self-congratulation, Carr said: “We don’t just do nice things because we’re nice people.”

Instead, he encouraged an approach to storytelling that will not only raise awareness but invite people to engage in the church’s ministry.

Storytelling must also take different audiences into account. Church “insiders” and casual members will not hear any given story the same way, Carr said. Nor will baby boomers and millennials. Stories also won’t be told or heard the same way in virtual and in-person contexts.

The ways to tell a story are many. Virtual means include emails, the church’s website, social media and video, to name a few. In-person ways include preaching, minutes for mission, town hall meetings and informal gatherings.

A church’s budget is not the “why” of stewardship, Carr said, but a byproduct. A narrative budget — in addition to, not instead of, a line-item budget — can be an engaging storytelling tool.

A narrative budget uses easy-to-read, descriptive terms to translate the numbers into a picture of the church’s ministry and its impact. It helps givers reframe dollars and cents as being about ministry.

“Church members give to ministry because ministry matters,” he said.

The narrative budget can present a more complete picture of how the pastor and even volunteers invest their time. It can also highlight specific events and programs.

“A good picture or two helps,” Carr said — and it’s also a way to involve younger people skilled at taking photos with their phones.