“What are we going to do with these people who are shedding tears day and night, who are wounded in their hearts, about these children who are suffering? How can the church be a light in the situation? How can we give hope? God has entrusted us with this responsibility, to be the voice of these people.” 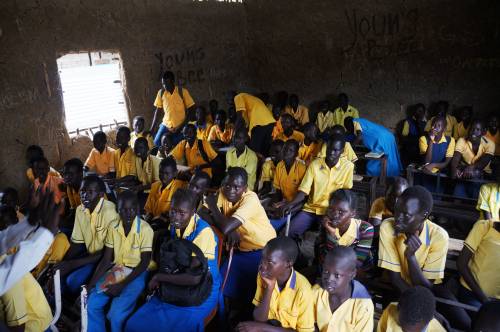 Deteriorating conditions in South Sudan have displaced nearly 3 million people, driving many to seek refuge outside the country. The national economy has collapsed, famine is gripping the rural areas of the country and many children can no longer attend school as a result of the escalating violence. Photo provided.

This was the anguished cry of leaders of the South Sudan Council of Churches (SSCC), contained in a pastoral message recently issued by the council. SSCC officials composed the message following a visit to refugee camps in neighboring Ethiopia, accompanied by international ecumenical leaders. According to United Nations estimates, an additional 100,000 people have poured across the border in the past year, bringing the total number of South Sudanese citizens displaced to the Gambella region of southwestern Ethiopia to more than 350,000.

The 2015 Agreement on the Resolution of the Conflict in South Sudan (ARCSS), brokered by IGAD, the community of nations in the horn of Africa, has not brought peace to the country. In fact, the SSCC warned that the situation has gotten worse, becoming “a multifaceted conflict with dozens of parties, factions, forces, militias, communities, warlords and other leaders.” When the agreement expires next year, it is likely to remain almost completely unimplemented.

Deteriorating conditions in South Sudan have displaced nearly 3 million people, driving many to seek refuge outside the country. United Nations agencies believe that as many as 6 million people — half of South Sudan’s population — are struggling to find food. “Our national economy has collapsed while our rural areas are suffering famine,” the SSCC leaders lament. “We believe that both the economic decline and the famine are man-made, a result of mismanagement, blatant corruption, insecurity, lack of governance and the rule of law, but above all the failure of leaders on all sides to prioritize the needs of the people over their own political and personal interests.”

The council called on the soldiers of all factions to refrain from killing, raping and looting, and, in particular, to stop targeting civilians. The council also urged the government of South Sudan to crack down on corruption and to slash military spending, using public resources to rebuild the nation’s tattered economy instead. In addition, the council called on IGAD nations, the U.N. and the international community as a whole not only to sustain their generous welcome and humanitarian assistance to the people of South Sudan, but also to “prevent the flow of yet more weapons into the conflict” and to assess why the ARCSS has failed, in order to identify more robust strategies to build peace in the region.

Presbyterian Church (U.S.A.) partners have asked members of the PC(USA) to pray, to give and to take other actions to help South Sudan find its way to peace, justice and reconciliation. “We need your prayers and support, in all ways, including advocacy,” said the Rev. Peter Gai Lual, moderator of the Presbyterian Church of South Sudan and Sudan. “It gives us strength and hope that we are standing as Christians together until we have peace.”

In particular, Presbyterian World Mission urges people of faith in the United States to: