The Rev. Ezequiel Herrera and the Rev. Zoë Garry are featured in the most recent edition of the Synod of the Sun’s Sunspots podcast. (Screenshot)

LOUISVILLE — The Rev. Zoë Garry and the Rev. Ezequiel Herrera operate in different ministry settings. But as they found out during an hour-long conversation last week, which can be heard here, they share at least two traits: both are church planters, and both serve God and new worshiping communities in the Synod of the Sun.

Garry is director of NOLA Wesley, an affirming campus ministry for the students of Tulane and Loyola universities in New Orleans. The ministry includes The Labyrinth, a pay-as-you-are-able coffee shop and new worshiping community.

Garry said members of several New Orleans churches typically cook dinner for students every Sunday, then stick around for dinner and the service, “which makes our worship intergenerational.” Students attending NOLA Wesley “do cross-stitching, yoga and egg-decorating,” Garry said. NOLA Wesley is the only queer-affirming ministry at Tulane and Loyola.

“My ministry is not as exciting,” Herrera said. Working about 10 miles north of the U.S.-Mexico border, Herrera spent much of the pandemic “networking and getting to know the community.” He would show up at people’s homes with a lawnmower, cutting the grass and then chatting up the homeowner or renter. “I became a pastor/lawnmower,” Herrera said.

“Most pastors have to wear multiple hats,” Garry told Herrera. 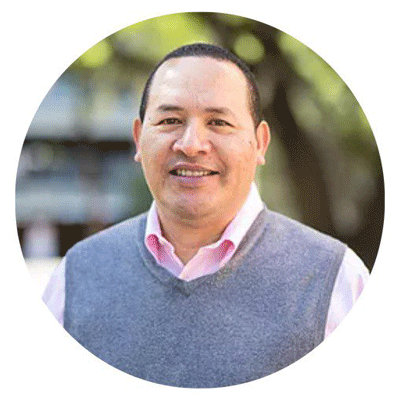 When he lived in New York City, Herrera, trained initially as a lawyer before completing seminary, taught English as a Second Language classes and “helped people to regularize their immigration status. Here things are completely different,” he said. “My way for getting to know people and developing a relationship with them was offering my services … as a lawnmower. The sun here is hotter than anyplace else!”

Hotter, Garry wondered, than in his native Dominican Republic?

“In the Dominican Republic, it’s hot, but you have some sort of a respite,” Herrera replied. “But here it’s really hard — hard and hot.”

Garry began ministry at Nola Wesley in June 2020, three months into the pandemic. “Church planting was already difficult” before the coronavirus shut down in-person gatherings, Garry said. “It sounds like we were both using the time to plant seeds and build individual relationships. It wasn’t a respite — it was a lot of work, a time of tilling and planting seeds and beginning relationships. Now, two years later, we are starting to see the fruits of that very intentional planting and rebuilding.”

“It just goes to show how fragile that momentum is,” Garry said. “Because you weren’t supported the momentum fell apart, which is so disappointing … I don’t think people acknowledge how fragile momentum is, especially in church planting.”

“The nature of the work is to be out and about, meeting people, getting to know folks and getting to know the lay of the land,” Herrera said. “And then we were told to shelter in place. But that has been the journey.”

Garry grew up a PK, a pastor’s kid. “I loved the church and had really amazing experiences with communities that uplifted and invested in me and made me feel seen and celebrated my talents,” Garry said. “They allowed me to preach while I was in high school.”

Garry has studied abroad, in Bangladesh and the Middle Each, and taught ESL classes in Brooklyn. Three years in seminary “were very formative. I learned I loved learning and love academia, but I didn’t want to be academic. So, I found a call in campus ministry, where I could still be part of that environment and be intentional about education and building relationships and cultivating these spaces for faith.”

“You have the best of both worlds. That’s a very interesting journey,” Herrera told Garry. “It’s a great privilege to be able to travel and be exposed to other cultures and peoples, and other faiths as well. I think that enhances your ability to see things not from a very narrow perspective, but to have a bigger, wider vision of what people are all about.”

Herrera said he couldn’t recall ever sharing his faith with high school classmates. “High schoolers are made fun of if they do that in a secular environment,” he said. “I had a hard time. Kids were mean to me. But the cafeteria lady was a Christian. She would give me extra cookies.”

“You have to be a good person for the cafeteria women to love you,” Garry told him. “They don’t do that for everyone.”

Herrera went on to college and law school, “but I never felt quite at home.” He became a commissioned lay pastor “doing ministry with a social justice component,” then “reached a point where I said, ‘I really need to go to seminary.’” He attended Austin Presbyterian Theological Seminary and later moved into his current position with Mission Presbytery. 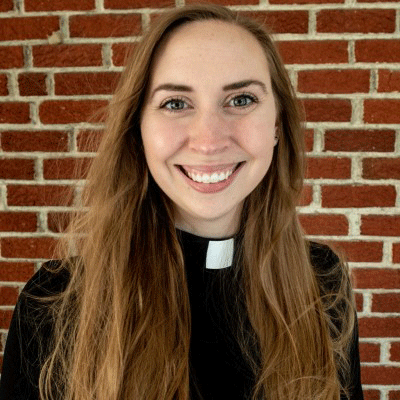 “I’m an ‘ideas’ person,” Garry told Herrera. “There are so many things I want to do, but you can’t do them by yourself. You need to have a partnership in the community or with someone else you do ministry with. If students aren’t invested and there isn’t student leadership, it won’t be successful.”

During year one at NOLA Wesley, “I came out swinging,” Garry said. “I had program ideas for every day of the week, and I thought they were amazing ideas … What I’ve learned is if I want events to go well, the students have to be the leaders on it … When students are leading, they’re inviting their friends. They’re letting people know about it. People are more likely to show up for their fellow students than me.”

“People may not welcome your ideas — not because it’s not a good idea, but because it does not come from them,” Herrera said. “If you can cultivate an environment where the ideas came from the group, they will have a vested interest — some people say they will have skin in the game.” In the Rio Grande Valley, Herrera said he’s learned “it takes time to learn to trust someone who has come from elsewhere. I have come from the Dominican Republic, from New York and from Austin … That’s why it’s so important for me to get acquainted with what the culture is … Don’t rush it. Get acquainted and get familiar with your intended community.”

“Even if only two or three people come to Bible study,” Garry said, “you are becoming someone very important in their life.”

How, Herrera wondered, has Garry been so successful establishing community partners?

“Starting off, I always asked churches to cook us a meal,” Garry said. “With churches, if the first conversation is not about money, they will open up to you.” Thus, the message is, “I want you to come here and see our community and be part of it,” Garry said. “They come, the meal’s good, everyone’s talking, and you’re building those relationships … Once those relationships are established, then it turns to, ‘How can you be more faithfully invested in me? My fence blew over in Hurricane Ida. Can you either support me paying someone to build me a new fence, or can you fix it yourself?’ You’re putting it in other people’s power. We’re in relationship. We are ministry friends, and we have a problem. How do I solve this? When you give them the power, they’re more likely to get creative or give you the investment you need.”

“This is difficult work that requires patience,” Herrera said. “There are lots of trials and errors. There’s no guarantee we’ll succeed.”

“That’s not how life works,” Garry replied. “The kingdom is now but it’s coming. What we are doing now is not all going to be sustainable or what people will need in the future. That’s what’s so important about these new worshiping communities. We are reimagining what people will need and what church is going to look like.”

“People talk about the church dying. Death isn’t the end,” Garry said. “We are going to fail, but we’re both in better positions from that. We have been able to resurrect our ministries and have reimagined what our faith can look like because we have seen that. When they fail — when they die — we know that’s not the end. That’s what makes us Christian.”

“We preach the resurrection, and yet we are so afraid of death,” Herrera said. “We try our best, but there’s no guarantee we will be successful at what we do. I find comfort that if I have given my very best — if I have done everything I could possibly have done, with love, passion, conviction and integrity — at the end of the day there is disappointment, but I can say, ‘I did my best. I did not leave any stone unturned, and I tried my very best.’”

It can also be important, Garry said, “to have people in your life saying, ‘You are called to do this, and you are doing a good job.’ So much of church planting is analyzing yourself and being critical of yourself and your ministry. It’s really important to have those affirming narratives that God is working in your life. You are living into your call and that is good.”

“From now on,” Herrera told Garry, “I’m going to be praying for your ministry.”

“I’ll be praying for you and for you community,” Garry answered.