Make A Donation Click Here >
Home › Gerontology expert to Older Adult conference: Get ready for the ‘coming tsunami’ of aging

Tells attendees ‘every 8 seconds someone in U.S. turns 65’ 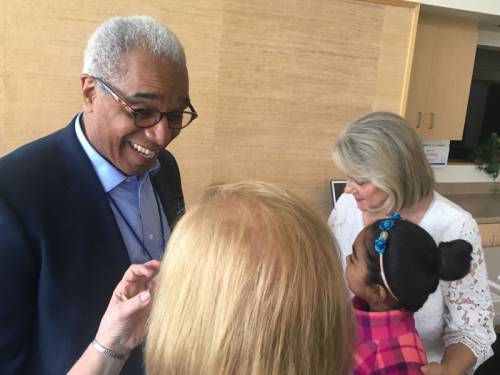 Dr. John Holton shares a lighter moment with attendees at the POAMN conference after his keynote address on aging. Photo by Paul Seebeck

“It’s a rare opportunity to view the countless stars that brighten the evening,” he said of the view at Zephyr Point Presbyterian Conference Center.

Holton, director of the Center for Gerontology at Concordia University Chicago, marveled not only at what he saw, but what astronomy tells us about these lights in the western sky.

“The light we see from the stars, starting with the sun, has been traveling anywhere from 8 minutes to years ago,” he said.

“We are seeing light from a distant past which reaches us and pleases us in our present day.”

With that in mind, Holton shared wisdom on aging from the recent and distant past — “stars of knowledge,” he called them — and present-day experiences as a guide in helping conference attendees come to grips with the coming “tsunami” of aging.

“You’ve probably heard the stats — every 8 seconds someone in the U.S. turns 65,” said Holton. “That’s 10,000 a day. That rate of aging will continue through the duration of the Baby Boomers.”

In the next decade, 3.65 million Americans will reach their 65th birthday — and nearly 1 trillion dollars will be in the hands of adults — according to research cited by Holton.

“We depend on older adults in ways we don’t accept today and that will change,” he said. “We’re moving into a territory we’ve never seen before.”

Gerontologists recognize how rapidly the construct of aging is changing. As a result, words used to describe those turning 65 — like “older adults” — are “under construction.”

“I prefer the term ‘maturing adult,’” he said. “It more accurately describes what happens as we develop into adulthood. As we mature, it becomes better and better.”

One of Holton’s “stars of knowledge” from the distant past, Roman philosopher Cicero, helped him better understand the maturing process that happens throughout adulthood.

Cicero wrote, “It is not my muscle speed or physical dexterity that great things are achieved, but rather by reflection, force of character and judgment; in these qualities, old age is usually not only not poorer, but is even richer.” Holton believes Cicero was exploring a deeper truth about the aging process.

“There’s an oft-repeated phrase that we say, even to children, as they are developing,” Holton said. “ ‘You don’t understand your own strength.’ But really, what does that mean?”

The answer, Holton argues, requires a lifetime of learning. Growing older removes the lack of knowledge one has about their individual capacity to accomplish and achieve. One comes to recognize what they’re good at — and what they’re not good at — and becomes at peace with that.

“Knowing who we are, and not, becomes our strength,” Holton said. “Because it’s resolved, it gives us the capacity to reflect without criticism and evaluate with restraint — and character that speaks with integrity and insight.”

To much delight and laughter, Holton described a recent conversation he had with 98-year-old “Sister Jean” Dolores Schmidt, who, as team chaplain, became the face of Loyola University Chicago’s miraculous run through the NCAA basketball tournament this year to the Final Four.

“I said to her, ‘I should’ve bought your bobblehead and had it autographed.’

And then there was a woman Holton met at her 100th birthday party. As she came down the stairs to celebrate — without her walker — she was standing up straighter than he was.

“Let’s savor and embrace these moments,” he said, “because in 20 years, it won’t be that extraordinary.”

Holton acknowledges that there is a counterargument that suggests that resource scarcity, tied to inadequate financial support and insufficient care systems for current and future aging generations, will dominate the aging narrative — along with a massive racial wealth gap among older adults. 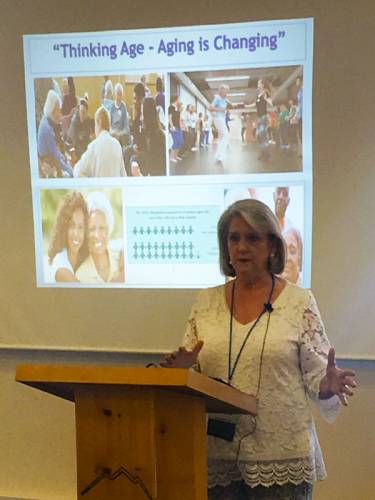 Michele Hendrix, president of POAMN, leads a workshop on aging at the conference. Photo by Paul Seebeck

According to Horton, even the most conservative estimates state that around 17 percent of older black men and 21 percent of women live in poverty — compared with 5 percent and 10 percent of non-Hispanic, older white men and women, respectively. The median household wealth of black older adults is just $55,000, compared to $280,900 for white older adults.

“As President John F. Kennedy said to Congress, ‘It is not enough for a great nation merely to have added new years to life — our objective must also be to add new life to those years,’” Holton said, citing surveys that show that 70 percent of older workers would like to do engaging work in retirement, but don’t because there is no blueprint for them at their stage of life.

“These people are not young — but they’re not old, either. How is this lack of a blueprint permissible in our society?” he asked.

“We have so much untapped wealth around us.”

Holton referenced a final “star of knowledge” quote, from the Most Rev. Michael Curry.

It came from the “charge” Curry gave to Prince Harry and his American bride, Meghan Markle, at their royal wedding, when he encouraged them to imagine a world “where love is the way.”

“Now imagine an epiphany, when we recognize that even though we have put barriers around our hearts that limit forgiveness and compassion, in that moment we are loved.

“God is awakening us to our own limitations, in contrast to Jesus’ sacrifice for love on the cross.

“When we recognize this blessing, we reach longevity, where there is no aging — only living, giving, serving, sacrificing, listening and loving — until we are called home.

“This carries us through our ultimate challenge in getting older, which is understanding what our responsibilities are to each other.”