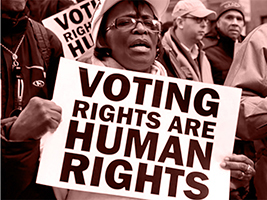 LOUISVILLE — Every few election cycles, the General Assembly of the Presbyterian Church (U.S.A.) tells Presbyterians and the rest of the world how important each vote is while suggesting ways to make voting and other civic engagement more convenient and more accessible to more Americans.

On Tuesday voters in a handful of states will go to the polls or will have returned their ballot by mail in this off-year election. At stake are offices from governor to city councils.

As recently as 2018’s “Honest Patriotism,” the General Assembly has weighed in on “our church’s long commitments to active civic engagement, responsible citizenship and prophetic witness, believing these commitments to be rooted in our faithful response to God’s call to be stewards of Creation” and a witness to “the corrosion of democratic institutions.”

To voters considering staying on the sidelines during this or any other election because they believe government doesn’t work for them or is irrelevant or corrupt, “Honest Patriotism” has this to say: “As Reformed Christians we stand in support of a theological tradition which honors government as a good, and stand in opposition to those who see government as a necessary evil, or worse. The casual denigration of government, the reflexive rhetorical impulse to understand government as an alien force that stands against us, must be resisted in the strongest terms if we are to be faithful to our theology.”

Presbyterians and others in the Reformed tradition don’t “embrace an uncritical endorsement of government in all its actions,” the study says. “The church, then, has a duty to the state: to maintain a prophetic voice, with which to constantly remind the state of its calling.”

According to “Honest Patriotism,” Presbyterians confess they, like other citizens of the United States, have paid “scant attention” to the voices of people of color, to women and LGBTQ persons.

For the Reformed Christian, “active participation in civil society is not a luxury. It is not a right we can choose to exercise or not as our whims may drive us. It is part of our calling as Christians to be active participants in God’s ordering of the earthly commonwealth,” and can take many forms, as Presbyterian pastor, theologian author Robert McAfee Brown reminds us in his book “Spirituality and Liberation”:

“A prayer of intercession may be a trip to the city jail to provide bail for someone wrongly arrested because of having the wrong skin color; an act of praise of God may be the affirmation of a Laotian child’s success in the English as a Second Language program … a blessing may be the gift of time and money that enables a woman victimized by sexual harassment to secure legal help; a prayer of adoration may be the formation of a political coalition to fight a specific injustice at city hall.”

Meeting in 2008, the 218th General Assembly approved “Lift Every Voice: Democracy, Voting Rights and Electoral Reform.” That study points out “the variety of constraints that continue to be imposed on African Americans, other persons of color, and poorer and working class citizens of all races (such as purged voter rolls, disproportionate levels of felon disenfranchisement, higher percentages of challenged voters, unproven allegations of fraud and practical obstacles to poll access).”

Concerns to the writers of that study echo those of today: the world’s highest level of campaign spending but among some of the lowest levels of voter turnout of any democracy and partisan-controlled redistricting that all but ensures reelection of U.S. House of Representative incumbents, and many state representatives, every two years.

“The ‘good news,’” the paper states, “is that what we do for the least powerful among us politically benefits us all, opening our political system’s access to the God at work in the experience and voices among new citizens, the young, the poor and increasingly aging voters, with fewer economic resources to spare and more needs. We do not need to let poverty and fear-based thinking paralyze our democracy any further.”

“Lift Every Voice” includes a range of recommendations for electoral reform and ways to increase other forms of civic participation. Among them:

“The members of the Presbyterian Church (U.S.A.) are among the most politically active of U.S. citizens, partly because many of us know how the system works (or doesn’t),” the study concludes. “We thus advocate a Presbyterian democratic or electoral ethic of individual discipline, multicultural awareness and communal responsibility … We are Christians first and Americans second, understanding God’s sovereignty above every nation, including our own.”