Fighting hunger one carrot at a time 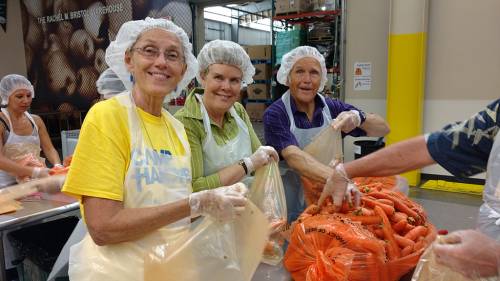 General Assembly participants don hairnets, aprons and gloves to offer healthful food to those that hunger. Photo by David Jewel.

“The Oregon Food Bank is the Gift Project recipient for this GA, but I wanted to offer a more hands-on experience as a further gift from Presbyterians to hungry people in our area,” says COLA member Rebecca Jewel, who with her husband David organized the work trip and tour of the Food Bank.

One in five Oregon households is food insecure. The more than 950 member agencies of the Food Bank aim to do something about that every day. General Assembly attendees staying at downtown hotels see the challenges of poverty and hunger right here on Portland’s streets.

“The Oregon Food Bank has a nationwide reputation for high-quality service and advocacy to end hunger,” says Larry Hollar, stated clerk of Miami Valley Presbytery in Ohio and former Bread for the World staff member. “I was glad to spend an evening away from the convention center to lend a hand in combatting hunger among God’s people in Oregon and Southwest Washington.”

For more information on the Oregon Food Bank, visit the Gift Project booth at the OCC or www.oregonfoodbank.org.