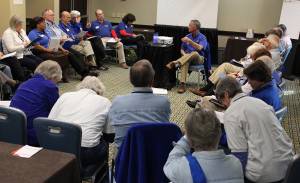 The Presbyterian Disaster Assistance National Response Team (NRT) treats every annual meeting like a family reunion. More than 100 volunteers and team members gather each year for training, worship, sharing and, in many cases, laughter. There are no strangers, just a close group of Presbyterians eager to meet and greet, catch up on travels and occasionally rib one another.

The NRT has learned to laugh together because its work is nothing to laugh about. Team members are called upon to leave home to meet with and love congregations and communities impacted by tornadoes, floods, hurricanes, fires and human caused disasters such as gun violence.

During its annual gatherings, the team undergoes required training which includes resiliency and renewal exercises and discusses the issues that are currently or will likely take up members’ time in months and years to come.

NRT leaders Jim Kirk and Sandra Price led the resiliency and renewal training, providing team members with the proper techniques and advice to stay focused and helpful even when working in an emotionally-charged situation.

“The ‘in words’ are resiliency and renewal. Everyone knows you need ‘R and R’ to do your job well,” said Price. “Some times we hear stories when we are out in the field that are hard to hear or we are verbally attacked by survivors of disaster, when they feel they are not getting enough help.”

Both Price and Kirk say team members need to practice certain techniques to ensure they don’t get caught up in the stress of the job.

“When the body experiences stress, you develop fatigue, the muscles constrict and your heart rate goes up,” said Kirk. “The brain becomes less active impacting thinking and other cognitive skills. That’s when you begin forgetting simple things like addresses or phone numbers because you are not functioning in the part of the brain that thinks about these things.”

Kirk says NRT members can some times take on the stories they hear when confronted by those suffering loss or feeling anger. That in turn, can lead to fear, sense of loss or anger among team members.

“We never know what we are going to walk into as far as emotions are concerned so it would be easy to get out of our comfort zones,” said Kirk. “We present learning techniques and exercises that will allow those deployed to stay focused and engaged while avoiding getting caught up in the emotion of the moment.”

In addition to self-help exercises, NRT members broke off into discussions over some of the key issues they face in their deployments and those that are likely to take up their time in the future.

NRT members pay tribute to Rick Turner with the PDA version of the song ‘When You’re Smiling.’ —Rick Jones

Susan Krehbiel, PDA refugee and asylum catalyst, presented the PDA documentary “Locked In a Box” which covers the incarceration of immigrants coming into the U.S. She also shared information on what is being done to help those seeking a better life in this country.

“Eight, ten or twelve months detention for immigrants is not unusual,” she said. “For $160 a day, detention facilities provide three hots and a cot, meaning three meals and a place to sleep.”

Krehbiel says it is a PDA mandate to help refugees and those seeking asylum.

Another issue generating attention amongst NRT members is water.

“If you look at the whole spectrum of things PDA deals with, water issues should be among the top two or three. It has ramifications in so many places and ways,” said the Rev. Bob Hauser, NRT member from Des Moines, Iowa. “Drought and lack of water is one issue, availability is another followed by conservation and water quality.”

Drought conditions already exist in parts of the U.S. including Arizona and California. Members Don Davis and the Rev. John Cheek offered firsthand accounts of how they are dealing with water shortages in their states.

“We had a drought in the 1990s that lasted seven years. We lost trees on our property because we didn’t have enough water to care for them,” said Davis of Santa Barbara. “We had a respite but the drought returned and it has brought our reservoir to dangerously low levels.”

Cheek, who lives in Tucson, says his state has been dealing with drought for 25 years with no end in sight. Water conservation is the norm in Arizona where some parts of the state have experienced fissures in the ground as the water table has dropped critically low. But, Cheek also believes more can be done.

“I would encourage us to look at what is essential for life. Is a green lawn essential? I don’t think so. Is water for drinking essential? Yes it is,” he said. “I believe we should place recreational projects like golf courses in a lower priority or promote community pools over private pools in order to conserve water.”

PDA officials say they want to equip local presbyteries on ways to conserve water so every congregation can be good stewards of what God has given them.

The annual meeting concluded Monday evening with a commissioning of all NRT members and volunteers. It was also the last opportunity for the NRT as a group to pay tribute to Rick Turner, PDA’s associate for domestic disaster response. Turner will retire later this year and members shared stories, tears, laughter and song to honor his years of service.

Next year’s annual National Response Team meeting will be held in Atlanta.