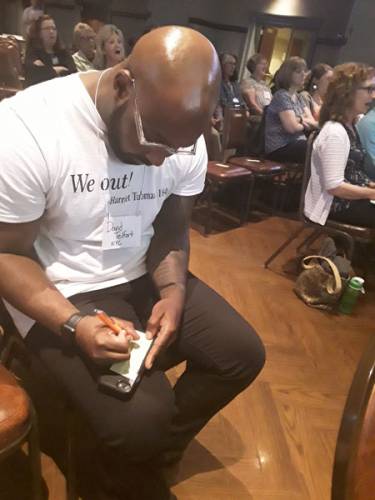 Church leaders wrote down their confessions and laments during evening worship at the East Coast Vital Congregations gathering. (Photo by Paul Seebeck)

With an audience of nearly 100 mid council and congregational leaders from eight presbyteries gathered here for the Vital Congregations East Coast gathering, Brown’s message during Tuesday evening’s confession and lament worship service was titled “Church on the Ash Heap.”

After reading sections of Job 29-30, where Job spews out his anger at God for being displaced and losing everything — his wealth, esteem, family, pride and power — Brown began to, in his words, “spew out” his own lament.

“I confess before you and God,” he said, “that I haven’t been back to my home PC(USA) church in years because I cannot endure seeing my home church in the throes of death.”

The last time Brown was there he felt as if his childhood church that had brought him to faith was frozen in time. He knew he had changed, awakened, in his words, “to the larger horizons of love and justice.” But his church had not.

“I mourn that I am angry, he said, “angry at my church for its failure to adapt. But I am more angry at myself for being so condemning.  But I cannot go back to those ‘glory days,’ and so I grieve and lament for my church and for myself.” 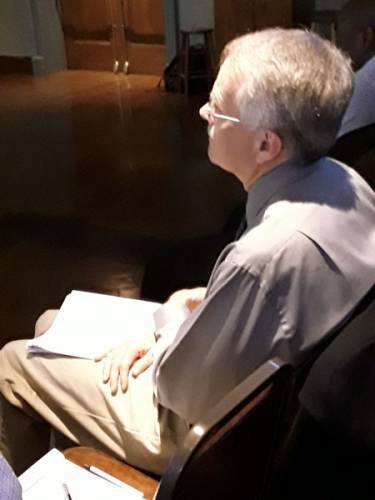 Dr. Bill Brown, William Marcellus McPheeters Professor of Old Testament at Columbia Theological Seminary, reflects before preaching on “The Church on the Ash Heap” during an evening service of confession and lament at the East Coast Vital Congregations gathering. (Photo by Paul Seebeck)

Brown said that Job also grieves the glory days. Referring to reports as early as chapter 1, Brown described how Job had meticulously programmed his life of fulfillment and prosperity at the expense of others.

“What Job laments most is his loss of control,” Brown said.  “To put it bluntly, Job laments the dismantling of his patriarchal supremacy.”

Through this process of loss, anger toward God and lament, Job changes.  Brown said he wonders if this is why God remains silent for 38 chapters — because God knows there is something redemptive in refusing to gloss over grief, bypass our pain, and deny our dysfunction.

“In lament, we are called to be brutally honest with each other and God,” Brown said. “It is then that we are opened to consider new, radical and hopeful possibilities.”

Just a few weeks ago, Brown returned to the presbytery of his home church to preach.  By happenstance he ran into a longstanding member of his childhood church. She began to tell him of the new things the church was doing to serve the neighborhood. There was a mixture of excitement and humility in her voice.

It was then that Brown said he realized “what a damn fool” he’d been. He was the one who’d given up hope.

“God can work in places that you thought were utterly hopeless,” he said. “I can’t go home again, but I can bear witness to something new, a new thing from God — even from a place I thought I knew all too well.”

At the end of his message, Brown encouraged those present to write their own laments and then place them on the ash heap on their way to receiving communion — and to come back for the morning devotional to see how Job was transformed.

On Wednesday morning, Brown described how God showed up in a whirlwind — the kind of whirlwind that Job’s children died in, according to chapter 1.

“God came to Job in power and fear,” he said, “in winds, full of force and words.”

Confronting Job, God takes him, Brown said, on “a litany of creation, a magic carpet ride through the stars, the depth of the seas, and the extremities of creation.”

Citing one of his favorite lines in Job, Job 38:25, where God asks Job, “Who has cut a channel for the torrents of rain?” in the desert, Brown describes God overturning Job’s worldview.

“What Job sees as a wasteland, God sees as new life,” he said, “providing rain and grass.”

“God also teaches Job about God’s care for all living animals — even the ones Job despised in his lament,” the ostriches and the jackals, Brown said.

When God is done speaking, Job responds in chapter 42:3, “I have uttered what I did not understand, things too wonderful me, which I did not know.”

Citing research into this kind of wonder, coming from the emerging science of awe, Brown cited the definition from scholars Dacher Keltner and Jonathan Haidt of awe, “an emotion that lies in the upper reach of pleasure and boundary of fear,” to help explain Job’s transformation.

“For Job, ‘the fear of the Lord’ was not the kind that made him avoid God,” Brown said.

“Instead it was wonder and awe. And that moved him closer to God — and brought comfort.”

As Job’s life is restored, he has seven sons and three daughters, the results of the wonder and awe of God, which are profound in Job’s life.

In Job 42:14-15, Job names his daughters. Then something unheard of in patriarchal time occurs, Brown said: Job grants his daughters an inheritance along with their brothers.

“It makes you wonder what other radical changes he was part of in the last 140 years of his life,” Brown said.

“Along with Job, may we the church, the PC(USA), be filled with this kind of awe, wonder and comfort,” Brown said.

The East Coast Vital Congregations gathering wraps up Thursday morning. The 100 church leaders are here praying, planning and worshiping together as they prepare to launch revitalization efforts starting in 2020 in their presbyteries and congregations through the two-year Vital Congregations initiative.

Click here to read the read the seven marks of vital congregations that churches will study together during the first year, as they assess and discern what new thing God might be calling them to live into in year two and beyond.