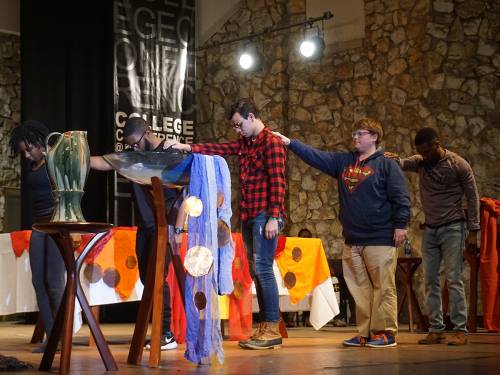 Nearly $5,500 was collected for Freedom Rising at the College Conference at Montreat, where these students from the UKirk ministry at the University of Tennessee, Chattanooga, shared in worship leadership. (Photo by Emily Enders Odom)

LOUISVILLE – Freedom Rising, a Presbyterian Church (U.S.A.) initiative “to address and improve the worsening plight of the African-American male,” has received gifts totaling $78,461 from a Pittsburgh-based charitable foundation, two mid councils and an offering collected at a Presbyterian collegiate conference.

The Freedom Rising work in Pittsburgh will benefit from a $50,000 grant made by a foundation that wishes to remain anonymous and a $20,000 gift from the Synod of the Trinity. Meanwhile, Sacramento Presbytery gave $3,000 to the broader Freedom Rising initiative. In addition, $5,461 was collected for Freedom Rising from participants at the College Conference at Montreat Conference Center in January. Freedom Rising is focused on five pilot cities: Baltimore, Charlotte, Cleveland, New York and Pittsburgh

Freedom Rising, which was approved by the 222nd General Assembly (2016), will tackle high unemployment, mass incarceration, substance abuse and other problems that disproportionately affect African-American males.

In Pittsburgh, the gifts will go toward congregationally based mentoring programs that will start in elementary school and continue into young adulthood, said the Rev. Brian Wallace, associate minister of Pittsburgh Presbytery.

He said these funds will help with start-up costs such as developing content, training mentors, and equipping congregations that host programs.

“We are grateful for the support we have received,” Wallace said. “We will make sure that as we use these funds we will use them well.”

While there are several leadership development programs in Pittsburgh dedicated to shaping community leaders, Wallace said there is no such effort in the city focused on the Presbyterian Church. “Both the foundation and the Synod see the promise and potential for what this type of program can do not only for the larger community but for the church as well.”

The Synod of the Trinity’s grant to Pittsburgh, which was made in conjunction with the synod’s 300th anniversary, came out of a concern about the country’s growing racial divide, said the Rev. Susan Faye Wonderland, the synod’s transitional executive.

“I think there is a growing awareness that we are not doing well with issues of racism and the walls that divide us,” she explained.

“We offered these grants so that it wouldn’t be just Pittsburgh that would benefit from this energy,” Wonderland said.

The synod also contributed $20,000 to a $300,000 campaign that Philadelphia Presbytery is conducting in connection with its 300th anniversary. The Philadelphia effort seeks to improve children’s educational opportunities, disrupt the school-to-prison pipeline, and promote restorative justice for formerly incarcerated individuals who are striving to re-enter society.

In Sacramento, the Rev. Nancy Clegg, the presbytery’s stated clerk, said it wants to support ministries that address racial divisions across the country as well as find ways to minister effectively and inclusively within its diverse region.  Freedom Rising, she said, presented an opportunity for the presbytery to express its concern for racial reconciliation far beyond its bounds.

“There was a concern that we need something in our denomination that is going to speak to the violence that we see happening in our nation and this looked like a very tangible way to do that,” Clegg said.

Sacramento’s Freedom Rising gift came from the presbytery’s Peacemaking Fund, which is supported by the presbytery’s share of the Peace & Global Witness Offering. The General Assembly has invited congregations and mid-councils to devote a portion of the Peace & Global Witness Offering they retain to Freedom Rising. Most congregations receive the offering on World Communion Sunday, which will be observed this Sunday.

At the College Conference in Montreat, North Carolina, the planning team designated Freedom Rising as the conference offering recipient, because it is “an exciting initiative” whose goals matched the conference’s focus, said the Rev. Katie Cashwell, Montreat’s director for programs. The theme of the conference was “Beyond Babel,” which centered on God’s intention for diversity, inclusion and justice throughout creation.

“Freedom Rising’s dedication to supporting African-American males and addressing the most pressing challenges of that particular population provided an opportunity for conferees to engage more deeply with the conference theme and respond to God’s call,” Cashwell said.

A downloadable bulletin insert about Freedom Rising is available to help congregations and mid councils promote the initiative.  Individuals may make gifts to Freedom Rising through the Presbyterian Foundation.