‘Those are the concrete expressions of God’s abundant, extravagant love’ 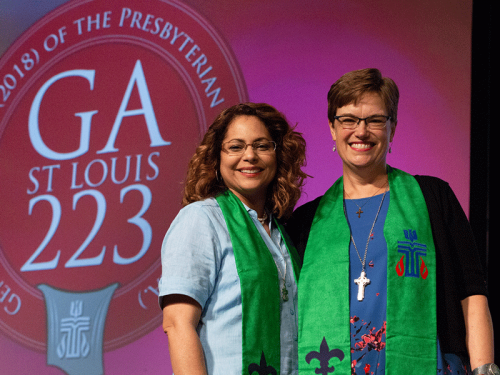 Ruling Elder Vilmarie Cintrón-Olivieri and the Rev. Cindy Kohlmann were Co-Moderators of the 223rd General Assembly (2018). (Photo by Michael Whitman)

LOUISVILLE — Theologically speaking, what feeds the Rev. Cindy Kohlmann’s heart and soul is the promise that God is love — and that God is good all the time.

“If I can believe that God is good, I can be part of sharing that goodness in the midst of war and chaos and illness,” she said, “and in all that divides and pulls us apart, causing such harm.”

Kohlmann, the connectional presbyter at New Castle Presbytery, was a guest on Everyday God-talk with So Jung Kim, associate for Theology in the PC(USA)’s Office of Theology & Worship.

As Co-Moderator of the 223rd General Assembly (2018), Kohlmann said she was honored to be part of the commissioning service for the Rev. Dr. Diane Moffett, president and executive director of the Presbyterian Mission Agency. She told Kim seeing how the Matthew 25 commitment — endorsed by two General Assemblies — captured Moffett’s imagination inspired her own (Kohlmann’s) theology.

Increasingly, Kohlmann said she sees God’s love and goodness playing out in the work of building congregational vitality, dismantling structural racism and eradicating systemic poverty, the three foci of the Matthew 25 invitation.

“Those are the concrete expressions of God’s abundant, extravagant love and God’s abundant desire for goodness and mercy to flow all of the days of our lives,” she said.

As Kohlmann invites individuals, congregations, and mid councils into what she calls “a purposeful vision,” she sees it helping people atone for the realities of our country’s history.

‘Whatever it looks like when I’m standing at the throne of God reviewing my life, I’d rather be judged for being too loving than judged for not loving enough.’

“If God is good and God is love, then we can look at the things we have benefited from as white citizens of the U.S.,” she said. “It’s helping us wrestle with that and be honest about that — to look squarely at our history and confess and seek reconciliation and repair.”

Calling Matthew 25 “important work,” Kohlmann says it both gives her a lot of hope and shows her how much work there is to do.

On both the national and international levels, she believes Jesus calls us to live as citizens, working in political systems so that God’s love and goodness can be equitably distributed and shared with everyone.

“I have the conviction that whatever it looks like when I’m standing at the throne of God reviewing my life, I’d rather be judged for being too loving than judged for not loving enough,” she said.

For Kohlmann, that conviction was a significant turning point in her soul and heart.

There have been times in the last year Kohlmann felt overwhelmed at how difficult life was. Because of fear of what God might ask of her next, she realized she wasn’t listening to God. As this is one of her spiritual disciplines, she spent the last year trying to become more aware of what is around her, which has helped her listen better for God. 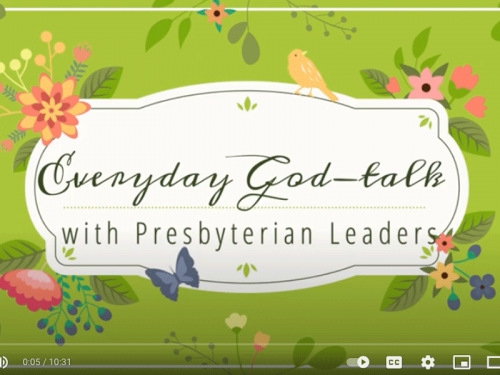 “If I listen and am aware and pay attention, without fail I receive something,” she said. “Sometimes [it’s not] the answer I’m hoping for; rather it is a sense of ‘not yet.’  But I receive that gift of grace.”

Kim finished the conversation saying she was grateful for Kohlmann sharing that prayer is not so much what we ask God to do for us.  Rather, it is really about listening.

“In the past two years, many of us have been in such a rush to speak and say something,” Kim said. “A lot of us were not able to control our anxiety and anger, which is understandable. I felt like everybody stopped listening to each other.”

Listen to the three parts of Kim’s conversation with Kohlmann  — her soul, her body of Christ, her heart — collected together here.

In the coming days, look for an upcoming Everyday God-talk conversation with the Rev. Dr. Jan Edmiston, general presbyter of the Presbytery of Charlotte and the Co-Moderator of the 222nd General Assembly (2016). Find that conversation with So Jung Kim on the Office of Theology & Worship’s YouTube channel.