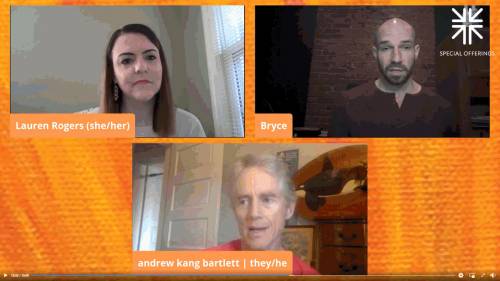 On the Oct. 11 episode of “Between Two Pulpits” from Presbyterian Special Offerings, co-hosts Lauren Rogers and Bryce Wiebe welcomed Andrew Kang Bartlett of the Presbyterian Hunger Program to discuss the Food Week of Action. (Screenshot)

LEXINGTON, Kentucky — About halfway through Monday’s discussion of this year’s Food Week of Action on “Between Two Pulpits,” co-host Bryce Wiebe turned to this week’s gospel lectionary reading from Mark 10:35–45.

Guest Andrew Kang Bartlett, associate for National Hunger Concerns in the Presbyterian Hunger Program, said, “That hit me as someone in this society who is inundated with unearned privileges as a white, heterosexual, able-bodied American man and, like others, subject to hubris, arrogance, exaggerated importance. So, this lack of humility, Jesus really explains how things really work, that we must humble ourselves and serve, and that is what makes us great.

It all relates to food sovereignty, one of the major focuses of the Food Week of Action, which began Sunday, Oct. 10, and runs through Sunday, Oct. 17. The Presbyterian Hunger Program is a co-sponsor of the week, which encourages people to get involved in food justice and sustainability issues in their communities.

Click here to learn more about the Food Week of Action

“Food sovereignty resonates with Christians because of the value in places on the people within the system,” Kang Bartlett said. “Food security is what you often hear about, but that’s just basically supplying the calories you need to stay alive. But it doesn’t get into … the treatment of the workers, the quality of the agriculture, how that impacts the environment. You can kind of call it democratizing the food system, because we’ve got a situation where there’s a very small number of agribusinesses — giant food corporations — that really control a lot of the shape of the food system, the policies that we get around agriculture, and the food that we end up eating.”

That food often is not great for us, Kang Bartlett said, noting the United States annually spends billions of dollars treating food-related illnesses. He and Wiebe, director of Presbyterian Special Offerings and the Presbyterian Giving Catalog, also addressed the economic and cultural costs of commercial food production, favoring larger producers over small farmers, pitting producers against each other and incurring the environmental impacts of transporting food across long distances. There is also a cultural impact of detaching people from the land where they live, Kang Bartlett said.

“How do we shorten the distance between the farm and the plate?” Kang Bartlett said.

Co-host Lauren Rogers, project manager for Digital Fundraising for Special Offerings and the Presbyterian Giving Catalog, added, “What can you say to a congregation who wants to address food sovereignty, but who might be a little bit scared to take that step because it is such a big step?”

Kang Bartlett acknowledged that trying to detach from the commercial agribusiness model of food distribution is challenging, but he said there are examples that churches and individuals can look to. One is New Roots in the PC(USA)’s home base of Louisville.

“What they’ve basically done is sidestep the industrial system, this whole massive distribution system that goes from here to there, you know, sending our food 1,500 miles on average, and they just created a very simple system,” Kang Bartlett said. “That is basically just working with farmers, letting them know how much food their shareholders will need during the season. And the farmers know what to plant. They know how many radishes, how many heads of lettuce, how many squash, etc. And it’s a great deal for the farmers because they don’t have to go and sit at a farmers market all day. They know that it’s going to what New Roots calls their fresh stock markets. … They’ve taken out of the process a lot of the middle people.”

At New Roots markets, Kang Bartlett said there are often people to demonstrate how to cook the fresh produce. He also encouraged seeking out urban farmers.

“They need a lot of support, because all those economic factors are supporting that ‘get big or get out’ large-scale farm. So smaller-scale, medium-scale farmers are really needing support,” Kang Bartlett said. “Seeking them out through your dollars and supporting them is a great way to kind of maintain that system that has that diversity that, you know, the monoculture system has tried to weed out.”

Engaging locally, Kang Bartlett and Wiebe said, puts us in a role of being part of an interconnected society, serving one another, in line with Christ’s call.

“Loving God, help to plant in us each season new seeds for your justice,” Wiebe prayed, closing the episode. “May they grow into plants that bear fruit — big and juicy, delightful fruit — that is delicious and serves our entire communities, that lights within us, that enlivens in us, the energy, the intelligence, the imagination and love to continue down a difficult path that reverses the systems we have inherited for the sake of the one you have invited.

“So set the table, and we will bring what we can grow, so that we might feast together in the kinship and in the world that you would have us make together.”