…be led forth in peace. (Isaiah 55:12). Support to the Peace & Global Witness Offering.
Make A Donation Click Here >
Home › Food rescue operations are vital during a pandemic

Pennsylvania woman among those trying to help 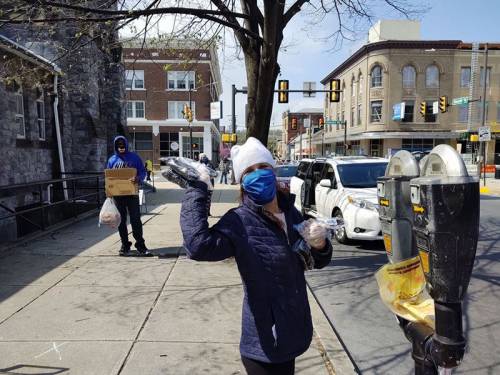 Lori Flick of Columbia Presbyterian Church’s Hands Across the Street ministry helps families in south-central Pennsylvania by rescuing food that might otherwise be wasted. (Contributed photo)

LOUISVILLE — Yearning to break free from a life hindered by addiction, Lori Flick walked into Columbia Presbyterian Church in south-central Pennsylvania almost seven years ago and found a place of refuge.

“I think a lot of people were like ‘Who is this girl?’” she said. “I was skinny as heck. I looked like I was ready to rob the place,” but “I just got to know everyone. They gave me hope. They gave me Jesus. They gave me my self-worth when I didn’t have it.”

Today, she’s a driving force behind the church’s food ministry. Hands Across the Street fights hunger in Lancaster County and other nearby areas through various means, including food dropoffs and food giveaways.

“I’ve been told I create flash mobs,” said Flick, who often uses social media to spread the word about the giveaways. “It can literally be a half hour before I do it. … I can post it and people will be there.”

Her role as coordinator of outreach services includes being the chief food rescuer, collecting food through a variety of channels that might otherwise go to waste.

Such efforts are playing a vital role these days in various parts of the country, according to the Presbyterian Hunger Program (PHP). The coronavirus pandemic has caused economic hardships on a national level as well as within households and brought attention to the issue of food insecurity.

“The Hands Across the Street ministry gives us hope in these trying times,” said Andrew Kang Bartlett, PHP’s Associate for National Hunger Concerns. “The need for food is so clear and, like Presbyterians have been doing for centuries, a group of caring souls come together to just make it happen.” 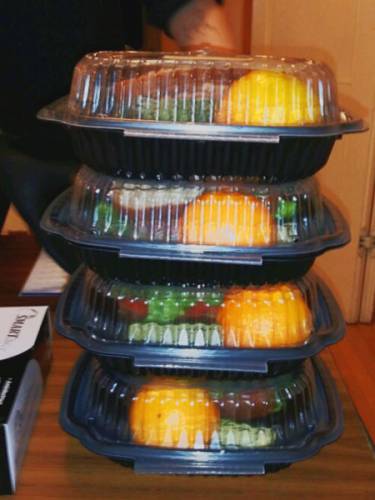 Across the country in Colorado, Denver Food Rescue fights food insecurity by collecting fresh produce that people get access to through No Cost Grocery Programs that are similar to farmers markets.

“We thrive off of the relationships that we have with wholesale distributors and grocery stores here in Denver,” said Christine Alford, executive director. “It’s because of them that we’re able to rescue their highly perishable food items,” which get distributed out into the community within two hours.

The food is delivered, sometimes via bicycle, to the No Cost Grocery Programs, which are run by community members. Eleven of 21 sites are operating during the pandemic and are seeing increased demand.

Denver Food Rescue, which served about 57,000 participants last year and about 17,000 in the last few weeks, recently received a grant from the Presbyterian Hunger Program to help with expenses, such as outfitting the staff with personal protective equipment. 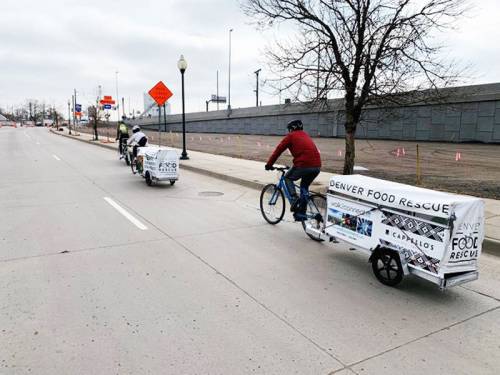 The food is quickly distributed to neighborhoods, sometimes by bicycle. (Contributed photo)

This organization “has all the ingredients of an effective group,” Bartlett said. “On one hand, you have idealism about food being a basic right for all combined with a commitment to serving people hurt by an unjust economic system. On the other hand, you have savvy activists who collaborate with partners around the city who can also crunch the numbers to show their impact serving low-income communities.”

Back in Pennsylvania at Hands Across the Street, Flick is one of a half-dozen people keeping the food ministry going during the pandemic, with the help of the Central Pennsylvania Food Bank and others.

Several times a week, Flick visits stores to say, “Hey, do you have any donations?” she said. “We get random stuff and we’ll just bag it.”

That’s just one aspect of the Hands Across the Street operation. There also are food deliveries to seniors and others in need, Flick said.

“We work with the Department of Education here in Pennsylvania on the Summer Food Service Program, which is actually a USDA program sanctioned by the state, and we work with them every summer to provide meals to kids,” said the Rev. David Powers, Columbia’s pastor and director of the Hands ministry.

However, “because of the COVID-19 pandemic, we can’t do congregate feeding, so we are running our Summer Food Service Program right now on what the state calls an emergency waiver. We are delivering meals to kids and their families,” Powers said. They contact Flick, then “we deliver meals to their doorstep,” Powers said.

Hands Across the Street also works with community partners like Ryder and Americold to give food away at various places, including outside a local high school recently.

When Americold has things that are about to expire or the stores don’t want the items, Hands comes to the rescue. “They give me about 20,000 to 40,000 pounds of food a week,” Flick said.

Then, “we do what we call a food truck,” Powers said. “A lot of it is the cold stuff from Americold and we go to a location somewhere where there’s a parking lot, usually where our shelter is located … and we just line folks up. We have a drive-through lane and then we have a location for people who are walking.”

The shelter will benefit from a recent grant from Presbyterian Disaster Assistance. 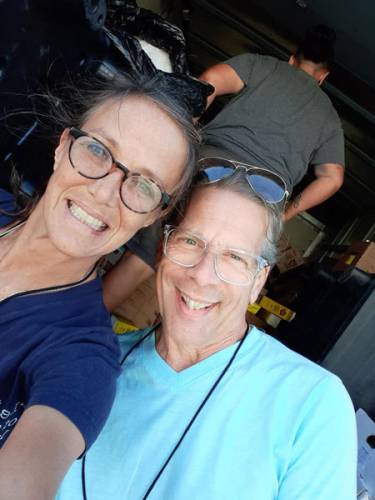 “Lori is like a vortex. She draws people to her,” said David Powers, pastor of Columbia Presbyterian Church and director of Hands Across the Street. (Contributed photo)

Flick said the giveaways are an opportunity to not only provide food but “to talk to them, to see where they are,” she said.

She, personally, needed a lifeline when she first arrived at the church nearly seven years ago and tries to share what she received from the church members and Powers.

“All of the food, all the outreach, all of it comes from (Powers’) compassionate heart for those that are broken,” Flick said. “He just wants to heal the hurts, so people can be whole and heal and don’t have to repeat cycles. He showed me that.”

At the time of her arrival, she was a nearly homeless mom with a baby and no true home. She walked into the church, heard the pastor’s own testimony and began to get involved doing things like sorting clothes. “They really mentored me,” she said. “The whole church.”

Being able to let people know you’ve walked in their shoes seems to make a difference, according to Powers, who describes himself as a recovering alcoholic. “I will always be a broken person, but I’m a redeemed person. I wouldn’t be able to do any of the things that I do today or that we do here today without God.”