Floodwall keeps high water away from Presbyterian Center in Louisville 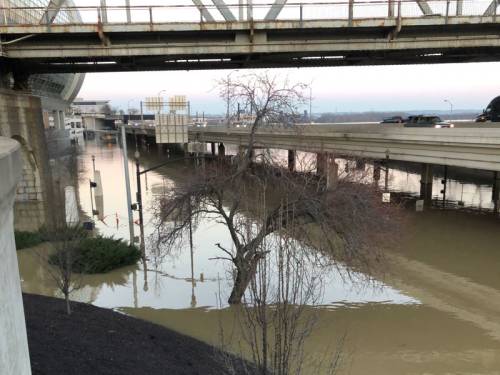 LOUISVILLE – Local government leaders up and down the Ohio River have been declaring states of emergency following a weekend of near-record flooding. Some communities have seen as much as 10 inches of rain.

Swollen rivers have caused problems in Kentucky, Indiana, Ohio, Missouri and Illinois. In Cincinnati, the Ohio River crested on Sunday at eight feet above flood stage, the highest level in 21 years, according to the National Weather Service.

The Presbytery of Cincinnati reports at least two churches were threatened by high water, including one in Aurora, Indiana. Cranston Memorial Presbyterian Church in New Richmond, Ohio, known for its history with the Underground Railroad, has seen water reach its doors.

“They cleared out everything because they had been through this before, in 1997. They also recruited a local high school football team to assist with the removal of pews to higher ground — everything, including appliances,” said the Rev. Nancy Kahaian, general presbyter. “It was a big effort because the water came up to the building but not inside.”

Kahaian says it’s too soon to say when the church will be able to move things back into place.

The Presbyterian Center in Louisville sits near the river’s edge. The National Weather Service says the river crested Monday evening near 36 feet, the 10th highest crest on record in the city. The city closed its floodgates over the weekend, preventing high water from reaching the front steps of the center. Businesses, homes and roads along the river have been flooded, with some flooded-out residents seeking refuge in emergency shelters. Local pumping stations have been working overtime to try to stay on top of the rising water.

“About all you can do is pay attention to what the weather people are saying, where it’s going to crest and go from there. If it gets close to the 37-foot level, then we’re in trouble,” said Joe Ferguson, director of building services at the Presbyterian Center. “With this flood and the new floodgates, we haven’t had problems. We weren’t anywhere close to what we had in 1997 as far as our building flooding.” 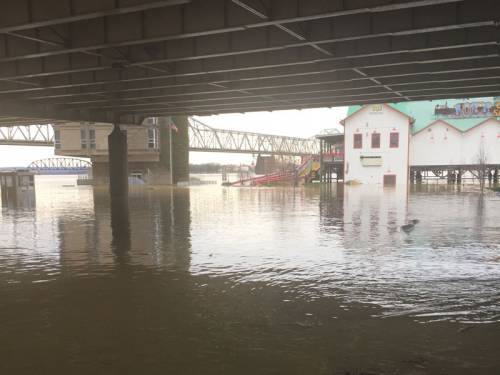 Riverfront restaurants and businesses are cut off by the rising floodwaters in downtown Louisville. Presbyterian News Service/Dana Dages

During the 1997 flood, water came up through the drains in the parking garage across the street from the center, causing floodwaters to spill into the street.

“We had water coming into the lower level of the building, but we had no idea where it was coming from,” said Ferguson. “We later discovered it was coming from a pipe that was buried in the ground from the old buildings that were here before. We had to watch it closely to make sure the pumps were staying active.”

The rising water in Louisville has also brought some unusual sights to the city. One local resident filmed a deer running through downtown, leaping over a railing into the flooded river below. It was last seen swimming toward one of the interstates. Just east of downtown, a cow that had drowned washed ashore in the city’s waterfront park.

The region is not out of the woods yet. Forecasters are predicting additional rain this week, but experts believe it will not be as severe as the rain that occurred over the weekend. Still, the additional rain is expected to slow down the recovery process.

“Presbyterian Disaster Assistance has been keeping close watch on the developments along the rivers and waterways,” said Jim Kirk, PDA’s associate for domestic disaster response. “We’ve reached out to the Presbytery of Cincinnati as well as other presbyteries in the path of the floodwaters to offer support if needed. We will continue to monitor the situation and respond as necessary.”

Presbyterian Disaster Assistance is able to respond to emergencies because of gifts to One Great Hour of Sharing and designated gifts. To support PDA’s response to flooding in the U.S., designate gifts to DR000191.