Faith leaders seek to bring the city together

LOUISVILLE – The emotional wounds from last week’s shootings in Dallas are still fresh for residents as well as for government and spiritual leaders. Since Thursday, faith leaders have prayed and mourned with the community and have begun discussing the best way for the city to heal and to bridge gaps.

“Our hearts are broken, and we feel profound sadness that such violence has come to our city,” said the Rev. Dr. Joe Clifford, pastor of First Presbyterian Church of Dallas. “This congregation has a long history of responding to the hurts in the city, so when I came in on Sunday morning, there were banners to be signed rejecting hate and violence and supporting our police.” 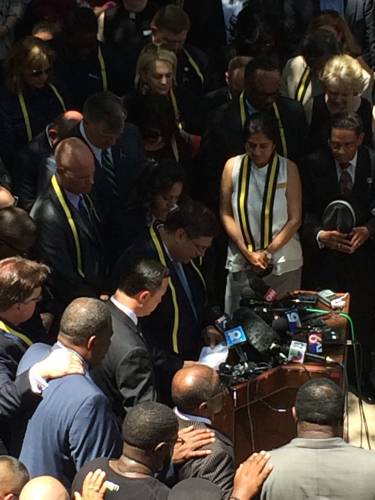 The 1600-member congregation, Clifford said, gathered for various prayer services in and around Dallas on Friday, participating in a community worship as well as joining in worship with Concord Missionary Baptist Church, a predominantly African American congregation.

“That’s something churches don’t always do in Dallas, but it was a beautiful experience,” he said. “Here I am with my brothers and sisters in Christ, to be with them in communion. We don’t worship the same way, but we all belong to Christ and I am thankful for that experience.”

Dallas Mayor Mike Rawlings is a member of First Presbyterian. Clifford said the mayor had just returned from his mother-in-law’s funeral when the downtown shootings took place.

“Within hours of the funeral, he was dealing with the worst tragedy to strike downtown Dallas since the Kennedy assassination,” said Clifford. “I think he has functioned in a remarkable way to lead the city, calling us to come together.”

Because of First Presbyterian’s location within Dallas, Clifford said, they’ve often joked that the church is the “Switzerland of Dallas,” a neutral zone between the northern and southern parts of the city.

“Over the years, the church has served as a bridge to bring these parts of Dallas together, and we’ve done that through social ministry as well as our congregation,” he said. “People come here from 36 different zip codes. We have people who are homeless sitting on the same pews as some of our city’s wealthiest citizens. The church has always brought people together, and I think that calling will be heightened in the wake of this tragedy.”

Later this week, the church will host a gathering of approximately 100 pastors from across the city to discuss what comes next.

“What do we do next to bring healing and love together to meet the challenges we face?” Clifford asked. “What does that look like on the issue of race in our city? There are deep roots, so how do we go forward and work toward reconciliation locally and across our nation?”

He said the city must move beyond “beautiful words” that have been proclaimed over the past several days and get to the action.

“We all want to support police, but are we willing to do what needs to be done to pay them enough? Our police are among the lowest paid law enforcement in the area,” he said. “If we are going to advocate for the right for people to own assault rifles, are we going to pay for the body armor to protect our police?”

Living out love is always the challenge, Clifford said. As a community of faith, he added, the city will have to ask tough questions about race and poverty as well.

“Are we going to invest in our public school system and do what’s best for children of color? Are we willing to invest money in this community to improve schools?” he asked. “Hopefully, we can hold this community together with the love we feel for one another in the wake of tragedy, and hopefully God will provide us a transformation.”

Clifford said he believes that God has the power to bring new life to the other side of the tragedy. He added that it’s up to the church to be open to the moving and empowerment of the Spirit to take on some of the difficult challenges.

Meanwhile, the Dallas tragedy comes at a time when Clifford is preparing to make a move. The pastor announced on Sunday that he would be leaving First Presbyterian soon to become pastor of Myers Park Presbyterian Church in Charlotte, North Carolina.

“The events of this week have compounded our sadness about leaving First Presbyterian,” he said. “It is an amazing congregation in a city that has been so good to us.”