Racial Justice Resources
Make A Donation Click Here >
Home › Find your lane, and go as fast as you can 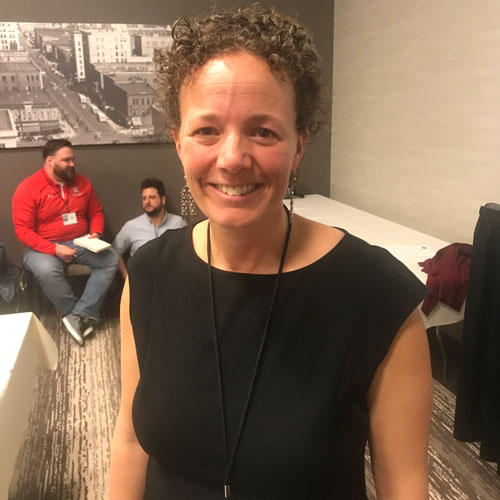 CEDAR RAPIDS, Iowa — Ali Michael, an author and the co-founder and director of the Race Institute for K-12 Educators, says her main task as a white person working primarily with other white folks toward racial justice is “to find my lane and go as fast as I can — in my lane.”

Michael said she began her work about 18 years ago after attending a workshop on creating anti-racism spaces. She established an anti-racism space, a community of allies that meets regularly, with another like-minded woman.

“It’s where I’ve done most of my learning about racism. We agreed we would ask our stupid questions of one another,” Michael said. “I grew up in a house where talking about race was impolite.”

She said she distinguishes between her white friends and white allies. When Michael feels like she hasn’t done her best her white friends tell her, “You’re so good! You didn’t do anything wrong,” she said. “They don’t have the same social and racial justice objectives. White allies don’t let me off the hook. They say, ‘I’ve done that. What do you think was going on for you?’”

She advised white people interested in developing their own anti-racism space to “include people of color in the organization to whom you are accountable, because any action I take will have impact on people of color.” The group should also have a facilitator, she said.

“Our inclination as white people is to compete with one another. When we are trying to be anti-racist, we try to be the best white person in the room,” she said. “But the goal is to end racism, and so it really doesn’t matter if I’m better than you or worse than you. White people need role models, and they need people to help them learn.”

As well, white people “need to cry about racism,” she said. “These spaces can give us a place where we can feel.”

In her work, “I welcome mistake-making,” she said. “Our motto should be ‘Do the wrong thing,’ because doing nothing is also wrong.” The best feedback she receives comes from “showing up and putting my foot in my mouth,” she said.

Those are, in broad strokes:

“Your racial identity is your toolbox,” she said. “If you feel guilt and shame, that is what you will project to other people. That’s why doing your own work is so important, because people take shame and guilt and transform it into hostility and anger.”

The ultimate goal is “not to feel bad,” she said. “The goal is to understand the whole picture — and to keep moving forward.”