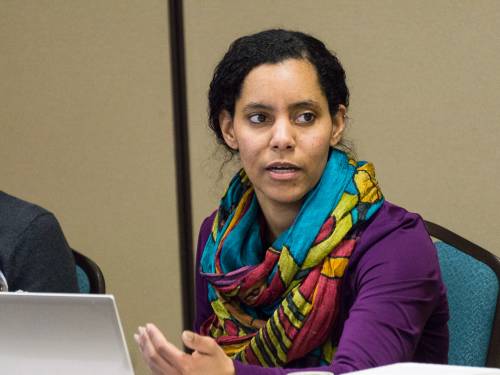 DALLAS — The 2020 Vision Team of the Presbyterian Church (U.S.A.) concluded its final face-to-face meeting here today after spending three days discussing the format and contents of the draft report it will submit to the 223rd General Assembly this summer in St. Louis.

The group’s task, as defined by the 222nd General Assembly (2016) of the PC(USA), is to “develop a guiding statement for the denomination and make a plan for its implementation with all deliberate speed. The process of developing such a guiding statement will help us to name and claim our denominational identity as we seek to follow the Spirit into the future.”

In its draft form, the guiding statement says God is calling the denomination to be “prayerful, courageous, united, serving and alive,” which also spells out the church’s acronym — PCUSA.

Translation of the 2020 Vision Team resources came up for discussion, with several concerns raised about the process to ensure the group’s work is translated and distributed before the General Assembly meets.

“I find it terribly offensive that we have to ask the General Assembly to translate these documents,” said DèAnn Cunningham, acknowledging the Way Forward Commission’s effort to expand translation services. “It’s especially offensive when we know we have [non-English speakers] who will not be able to access this information.”

Discussion of the report’s preamble consumed the majority of the day’s time, including the purpose and use of the section in the report. Concerns over the preamble’s length were leveled against what the team felt was a strong position in the guiding statement.

“[The preamble] should be an invitation to the people of the pews, and people at all levels of the church, to join us in the process,” Deborah Foster said. 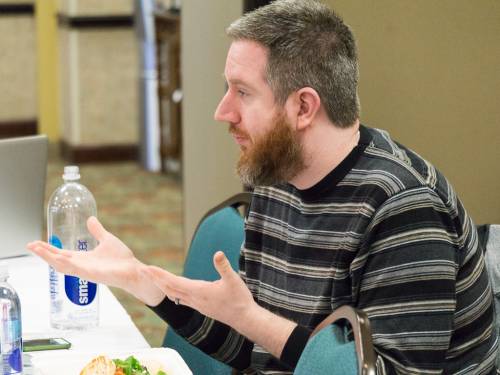 “The value the preamble gives as part of the work we’re presenting is it acknowledges the fear that’s going on,” said Joshua Andrzejewski, hoping the introduction would capture the denomination’s concerns and anxiety that, in part, formed the 2020 Vision Team, along with the Way Forward Commission, at the 222nd General Assembly. “It acknowledges we don’t have our head in the sand. … Right up front, we’re saying, ‘This is why we did this work.’ And we did it in hope in the faith that’s gone before us and the scriptural basis will be important for people to see.”

“The preamble and its language are important to telling our story,” added Joshua Narcisse on the detail contained in the draft preamble, which traces the biblical account of God’s covenant people. “It’s important for crafting a narrative for where we see ourselves in the Christian community.”

Removing the longest section of the preamble, what the group’s co-moderator Lisa Juica Perkins called a recounting of “salvation history,” the team settled on a shorter introductory statement, potentially moving the more detailed information to a study resource that will accompany the group’s report.

In the continued effort to disseminate the guiding statement in a format other than a written report, team member Jerrod Lowry suggested contacting musicians to write a song that could be used as part of committee worship. “It’s too late to incorporate this into Assembly worship,” he said, “but we’d like to prepare something that can be used in the committee’s worship.”

The questions sent to constituent groups so the 2020 Vision Team could conduct listening sessions across the denomination, along with a summary of responses, are to be included in the appendices. As directed by General Assembly 222, former Moderator Heath Rada’s report of his listening sessions and the “When We Gather at the Table” document were considered by the team and will be included as links in the appendices along with other documents referenced by the group.

At the conclusion of its meeting today, the 2020 Vision Team released its draft guiding statement and preface for distribution. It is provided below and is subject to change prior to the Feb. 16 deadline for submission to the General Assembly.

Our Reformed heritage understands the power of words and we humbly offer this guiding statement as speaking truth and declaring life.

The 2020 Vision Team was mandated by the 222nd General Assembly and charged with developing a guiding statement for the denomination as it moves into the future.

In the faithful desire to discern the will of God we listened throughout the denomination and beyond, hearing hope and frustration, expectation and anxiety.

Along our journey even when it is hard to see the way forward, God has spoken and continues to speak to us in these times and places.

God calls the Presbyterian Church (U.S.A.) to be:

And so, God calls the Presbyterian Church (USA) to be: Prayerful, Courageous, United, Serving, Alive.

Thanks be to God.

The full report of the Vision 2020 Team will be distributed for review by commissioners and other interested parties on the PC Biz site following the Feb. 16 submission deadline.