Church works to alleviate hunger and loss of biodiversity 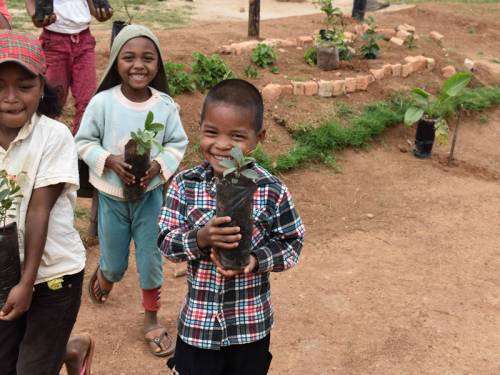 Children hold fruit trees for planting at their FJKM school in Madagascar. (Photo by Dan Turk)

MADAGASCAR — The Fiangonan’i Jesoa Kristy eto Madagasikara (FJKM), PC(USA)’s partner denomination in Madagascar, believes strongly in spreading the gospel and helping people improve their lives. The FJKM also believes that Christians have a responsibility to help preserve Creation. Church leaders often quote Genesis 2:15, “The Lord God took the man and put him in the Garden of Eden to work it and take care of it” (NIV). Helping people improve their lives while helping to preserve Madagascar’s unique biodiversity is especially challenging given the extent of hunger and poverty in Madagascar and the environmental degradation threatening many species with extinction. The climate crisis is intensifying these challenges.

According to the World Bank, “Madagascar is among the poorest countries in the world with 75% of the population living on less than $1.90 per day.” The majority of people are subsistence farmers who produce most of their own food, with hopefully enough extra to sell to purchase necessities such as clothes and medicines, and to pay school fees. The Global Hunger Index 2019 found hunger in Madagascar to be in the alarming category, the fourth worst of the 117 countries for which sufficient data was available. Chronic malnutrition is so prevalent that nearly 55% of children under 5 years of age are stunted. 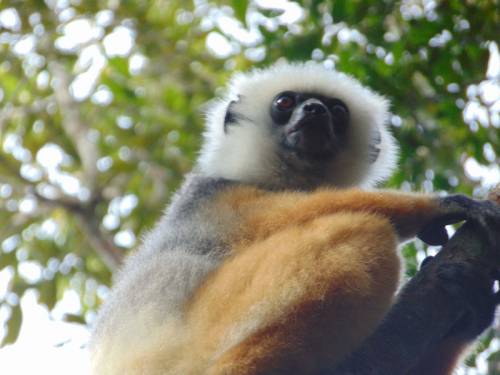 A Simpona lemur watches from its perch in the Andasibe region of Madagascar. (Photo by Kathy Melvin)

Environmental emergency
Hundreds of Madagascar’s plants and animals are threatened with extinction. For example, six of the world’s 25 most endangered primates are lemurs from Madagascar (according to the report “Primates in Peril 2016–18”). A distinguished group of scientists recently declared that the world is facing the “last chance for Madagascar’s biodiversity.” The Association for Tropical Biology and Conservation concluded in 2019 that “without urgent action, it will soon be too late to save some of Madagascar’s most iconic habitats and species.”

Deforestation is the major driver of biodiversity loss. Selective removal of endangered species, such as rosewood trees for making high-priced furniture and the angonoka tortoise for the international pet trade, also plays a role. Deforestation is often done to obtain agricultural fields (known as slash-and-burn agriculture), to get firewood and to make charcoal for cooking meals in urban areas. Cutting trees to build houses and to make boards for construction also contributes to deforestation.

Madagascar’s population, currently estimated at about 27 million, is expected to grow to more than 55 million by 2050. Population growth alone will put extreme pressure on agricultural production and remaining natural forests.

In 2019, Time magazine, using analysis from Verisk Maplecroft, declared Madagascar to be one of the “10 countries most vulnerable to climate change.” The changing climate is expected to cause an “increase in temperature of 2.5 degrees Celsius to 3 degrees Celsius, increased unpredictability of seasonal rains,” and “increased incidence or intensity of extreme weather events, including droughts, cyclones and floods” (USAID Climate Change Risk Profile, Madagascar). Extreme weather events exacerbate hunger. In their search for means of survival, people often adopt environmentally destructive practices, such as cutting native forests to make charcoal or doing slash-and burn agriculture to grow corn as a cash crop. These secondary effects on Madagascar’s biodiversity are probably much greater than the direct consequences of higher temperatures.

What can be done

Climate justice means that countries largely responsible for creating the climate crisis should help countries like Madagascar that have very low carbon emissions but suffer the consequences of climate change.

The FJKM, the largest Protestant church in Madagascar, is fighting hunger and loss of biodiversity in many ways. It has integrated training in growing fruits, vegetables and fast-growing trees into the program of study for student pastors. This helps the new pastors feed their families and provide technical assistance for others in their communities to help reduce hunger and promote resilience in the face of climate change. As part of their training, seminary students do field trips to natural forests where they see lemurs in the wild and learn about the threats that jeopardize their continued survival. 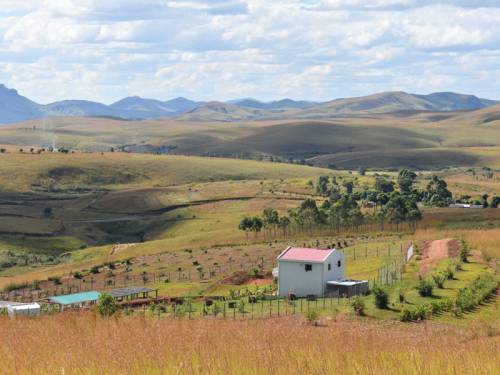 The FJKM Fruit Center in the northwestern region of Mahatsinjo provides mangos and other fruit. (Photo by Elizabeth Turk)

The FJKM’s Fruits, Vegetables, and Environmental Education (FVEE) program provides native trees for planting at FJKM schools and churches to help people learn about the value of Madagascar’s amazing trees. The FVEE has set up a fruit center in northwestern Madagascar to harness the potential of mangos and other fruit trees to reduce poverty and hunger. Mangos grow well on soils of low fertility in areas that have a long dry season. With assistance from the Presbyterian Hunger Program, over 100 low-income farmers have recently been trained to plant, grow and graft mango trees. By growing selected mango varieties and grafting their own trees, these farmers will have opportunities to greatly improve their lives.

In Madagascar, the challenges of hunger and loss of biodiversity are made worse by the climate crisis; nevertheless, the FJKM, in partnership with the PC(USA), is helping to make a difference. 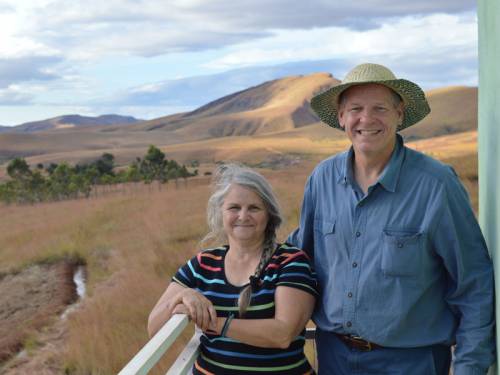 Elizabeth and Dan Turk are mission co-workers serving in partnership with the Church of Jesus Christ in Madagascar (FJKM). (Photo by John Martin)

“That is the greatest injustice of climate change — that those who bear the least responsibility for climate change are the ones who will suffer the most.”       — Mary Robinson, adjunct professor of climate justice, Trinity College Dublin; former U.N. high commissioner for human rights; former president of Ireland (Global Hunger Index 2019)

Get involved
Consider supporting the work of Dan and Elizabeth Turk to improve the lives of Malagasy people:
pcusa.org/donate/E200418