Second Presbyterian Church in Louisville is one of many congregations helping refugees make the U.S. home 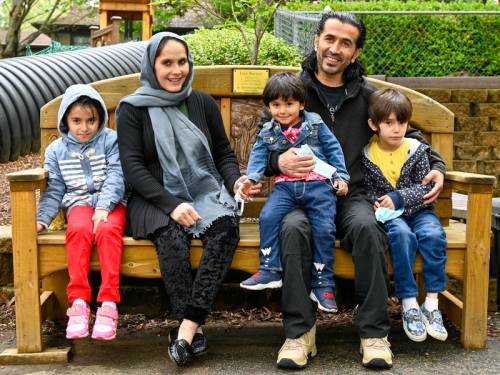 The Amiri family, recent refugees from Afghanistan, shown on the playground at Second Presbyterian Church in Louisville, Kentucky. The church co-sponsored the family with Kentucky Refugee Ministries for their first months in the United States. (Photo by Rich Copley)

LOUISVILLE — Balloons swayed in the air, children kicked their swings toward the sky, and laughter floated beyond the fence as congregants and friends of Second Presbyterian Church gathered on the church’s playground after one of its first in-person worship services in months.

The start of spring and signs the COVID-19 pandemic was winding down would be more than enough cause to celebrate at the Louisville church. The reason for this celebration, over popcorn and Middle Eastern treats, began months before in the darkest days of the year and the pandemic.

The chill of late fall was just setting in as the Amiri family arrived from Afghanistan at Muhammad Ali International Airport, stepping into a country they knew little about beyond what they saw on TV and father Raees’ work with the United States military. That work had put a target on Raees, his wife Khatul, and their three — soon to be four — children, so they had been granted a Special Immigrant Visa (SIV) to come to the United States.

There to welcome them, despite fears of the surging coronavirus, were a handful of members of Second Church to start walking them through the months of making the United States their new home. 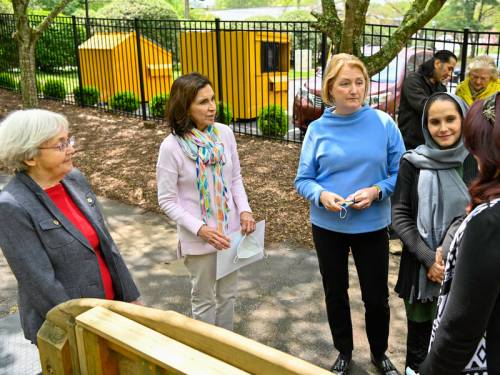 “Before we left Afghanistan, I would worry about lots of things,” Raees said to the Second Presbyterian members and staff at the mid-April event, through a translator from Kentucky Refugee Ministries (KRM). “But with your support, we are here today. With your support, our lives changed positively.”

Khatul, just days away from giving birth to their fourth child, added, also through a translator, “Your support made our lives stable. But we cannot find friendship anywhere, so your friendship and being here means a lot to us.”

The ceremony was meant to mark a milestone in Second Presbyterian’s relationship with the Amiri family, which the church was connected to through Kentucky Refugee Ministries, a nonprofit organization that provides resettlement services to refugees through co-sponsorships with faith communities and other entities to help refugees successfully integrate into their new community. Since the arrival of the Amiri family, the church has helped support them by providing things such as rental assistance, clothing and housing supplies.

The ceremony on the playground meant that the financial obligation of the church to the Amiris had ended. If recent history is any indication, the friendship is far from over. 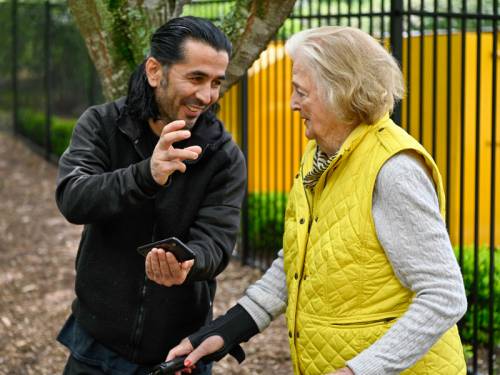 Raees Amiri, a recent refugee from Afghanistan, speaks with Macie Nichols at an event at Second Presbyterian Church celebrating the church’s co-sponsorship of Amiri and his family with Kentucky Refugee Ministries. (Photo by Rich Copley)

Chris Ellis ticks through the status of other people Second Presbyterian has co-sponsored with KRM since 2017. One person is now in graduate school. Another family is trying to get their 4-year-old son in preschool. As the pandemic took hold, the congregation gathered resources to get Chromebooks for the families they had sponsored since 2017 so children could continue school, and parents, many of whom had lost their jobs, could search for new work.

Ellis renewed the relationship between Second and KRM in 2017, initially approaching the organization to see how the church could help.

“We could do a few things,” Ellis said. “We could assist, and we could learn along the way. By 2018, in February, we got our first family, from the Congo, and they had been 20 years at a refugee camp.”

Second Church has been sponsoring families ever since with a team of members who feel called to join in the effort of welcoming people coming to the United States from other countries, often through horrendous circumstances that threaten their lives and livelihoods.

“I liked what I was hearing in the pulpit from Steve,” church member Martha Nichols-Pecceu said, referring to Second Presbyterian pastor the Rev. Steve Jester. “He was reading the story of the Israelites in exile. And you know, it’s a story of abandonment, and of that feeling of being insignificant, and that really touched me.”

Nichols-Pecceu found that her background in French was particularly useful working with refugees from French-speaking countries in Africa. Members of the Second Presbyterian group said that when they sensed one of the refugees they worked with from Africa was feeling isolated during the pandemic, Nichols-Pecceu organized a socially-distanced, safe lunch with other refugees from Africa and the African community in Louisville to help make connections.

“We often think about the material possessions people have lost — loss of home, loss of jobs, and the financial needs they have,” said Susan Krehbiel, Associate for Refugees & Asylum for Presbyterian Disaster Assistance. “But another really, really important part of reestablishing their lives and their wellbeing is having social ties. So, the church community … having not only that financial commitment, but that kind of friendship as demonstrated in the event that Martha just described is part of the life-saving work.” 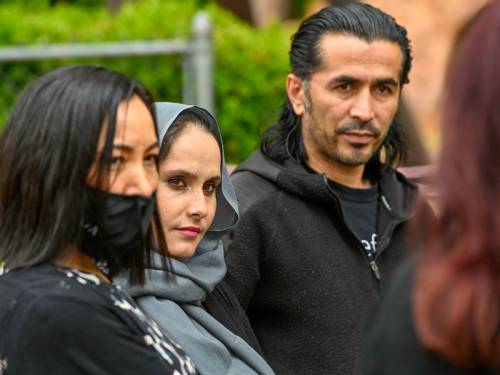 Work with immigrants and refugees is often associated with border communities in states like Texas and California. But, Krehbiel points out, refugees arrive in communities across the country, needing help to get their lives started in their new homes. With the cap on refugees being raised from historic lows to 62,500 people this year and 125,000 next, the need for churches to help is growing.

“The best way to make it work is to connect a refugee family with a faith community,” says Maha Kolko, Case Worker & Sponsorship Developer for KRM.

Since she became aware there was a good chance caps would be raised, Kolko said she has been working to recruit more churches able to help welcome refugees to Kentucky. Most of the churches she works with are Presbyterian, but there are also Methodist, Lutheran, Seventh-Day Adventist and other congregations that have gotten involved. Second Presbyterian Church, she says, is one of the most active congregations and has been thoughtful coming up with new ways to address needs and help families feel at home.

“They try to think of the family before they show up, and that’s so important,” Kolko said. 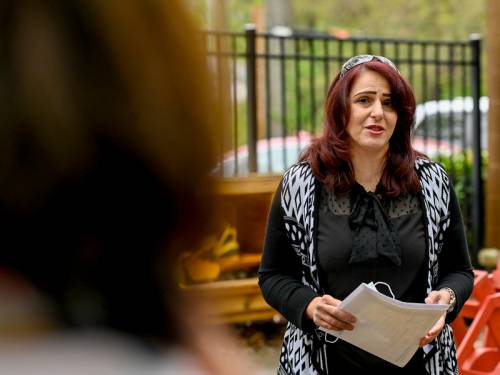 Maha Kolko of Kentucky Refugee Ministries speaks at an event at Second Presbyterian Church in Louisville, Kentucky celebrating the church’s co-sponsorship of the Amiri family, refugees from Afghanistan. (Photo by Rich Copley)

In the case of KRM, the organization handles a lot of the clerical needs in bringing a new family to the country such as getting social security cards so that the adults can work. They look to the church to work with more cultural and lifestyle aspects of coming to the U.S., from setting up a home to getting to know their new city. When the pandemic is not in full swing, Second Presbyterian volunteers say they like to take new families to sites like Churchill Downs racetrack, where the Kentucky Derby is held.

Click here to give to Presbyterian Disaster Assistance’s refugee and asylum work.

With the Amiris, the Second group has helped with things like helping Raees get a commercial driver’s license so he can get work similar to what he did in Afghanistan, and aiding Khatul with pre- and neonatal needs, as she has given birth to a new baby daughter since that April event.

“I had a little ‘aha’ moment talking with one of the neonatal nurses yesterday,” said Second member Kathy Oyler, who had been helping take Khatul to appointments. “I got the hairy eyebrow and, ‘Who are you, exactly?’ And I said, ‘I’m a member of Second Presbyterian Church on the refugee team, and we’re sponsoring this family,’ blah, blah, blah, blah, blah. And she said, ‘Oh. So, they belong to your church?’ And I went, ‘Well, no. They’re Muslim.’ 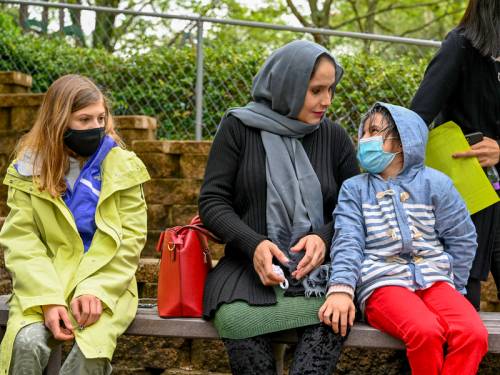 Khatul Amiri and her daughter share a moment at an event on the playground at Second Presbyterian Church in Louisville in honor of the Amiris, recent immigrants from Afghanistan. Charlotte (left), the daughter of one of the church’s refugee team members, has been helping the Amiri children adapt to their new home. (Photo by Rich Copley)

“It never occurred to me that that didn’t matter. It doesn’t matter what religion or what country or where you come from. There’s a need. And that’s what we learned from the pulpit.”

For churches thinking about getting involved in refugee ministry, the Second Presbyterian members recommend beginning by meeting with agencies in their area that they can work with, like KRM. Kolko said, “It’s not as big a commitment as you might think.” She also notes churches can often commit at a level at which they are comfortable, so they don’t have to start with full sponsorship.

Second members say even if there is a core committee working on the project, they should keep the whole church informed about what they are doing through things like putting photos and stories in church newsletters. They also said the congregation can be a great resource for meeting the needs of the family.

“The more specific you can be about what you need, it will come,” Nichols-Pecceu said, and Oyler added, “It’s like the fishes and the loaves.

“If somebody is thinking about it, just do it. It all works out. Just jump into the water.” 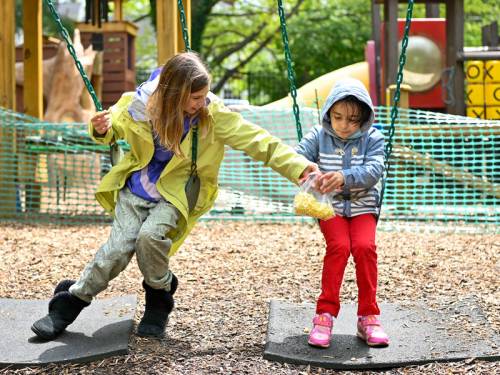 Charlotte, the daughter of one of the members of the Second Presbyterian Church Louisville refugee team, shares a bag of popcorn with the daughter of the Amiri family, recent refugees from Afghanistan. Charlotte has really enjoyed getting to know refugee children. (Photo by Rich Copley)

Even as the formal part of Second’s relationship with the Amiris through KRM came to a close, the relationships that have been built were obvious in the ease with which the children played, Nichols-Pecceu’s daughter Charlotte swinging with the Amiris’ daughter, and Raees and Khatul talked with church members and staff.

“We knew this meeting was the end of the official relationship, but we feel very good that we found good friends that still will be here,” Khatul said. “We come from a completely different country, different culture, speak a different language. But still, I feel comfortable that we have them and are surrounded with them here.”