Group says ‘We are all refugees’ 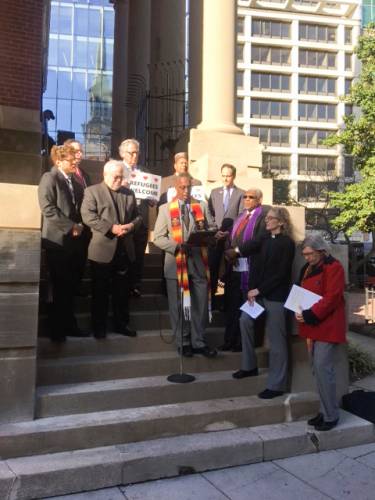 Jimmie Hawkins joins other faith leaders on the steps of the New York Avenue Presbyterian Church in Washington, D.C. to speak against the president’s executive order on immigrants and refugees. (Photo by Bridget Wendell)

LOUISVILLE – A group of Christian, Jewish and Muslim faith leaders joined together on Wednesday afternoon to express opposition to President Trump’s executive orders on immigration and refugees. The new president issued the orders to curb immigration by increasing border security and curtailing the acceptance of refugees from other countries such as Syria, Sudan, Somalia, Iraq, Iran, Libya and Yemen.

Speaking at a press conference on the steps of the New York Avenue Presbyterian Church in Washington, D.C., the group said the president’s actions are nothing more than “turning our backs” on refugees at a time they are in most need of safety. The faith leaders add that the president’s decision will grind refugee processing to a halt, forcing thousands of families to wait months or years for a solution while putting them in danger.

“Nearly 60 million people are displaced by war and persecution; 30 million of those are children. Eleven million displaced Syrians cannot go to school, tend to their land or raise their children in the place they know as home,” said the Rev. Jimmie Hawkins, director of the Presbyterian Church (U.S.A.)’s Office of Public Witness. “They are spending months journeying, sleeping outside and praying for a future for their families in a place that is safe from conflict. Our nation has historically stood for hope and welcome for those fleeing war and persecution. We cannot turn our backs on them now.”

Hawkins said now is the time for the faith community and the nation to assist refugees and asylum seekers who are the “most vulnerable population on our planet.”

“We cannot let the noise of a fearful few drown out compassion and our firmly held collective values,” he said. “Rather than follow our most basic instincts of fear and hatred, we must send a message of hope and healing, of peace and justice to those fleeing desperate situations.”

In the executive order issued on Wednesday, the president said deteriorating conditions in certain countries “increase the likelihood that terrorists will use any means possible to enter the country.”

“The United States must be vigilant during the visa-issuance process to ensure that those approved for admission do not intend to harm Americans and that they have no ties to terrorism,” the executive order stated. “In order to protect Americans, we must ensure that those admitted to this country do not bear hostile attitudes into our country, do not support the U.S. Constitution or would place violent religious edicts over American law.” 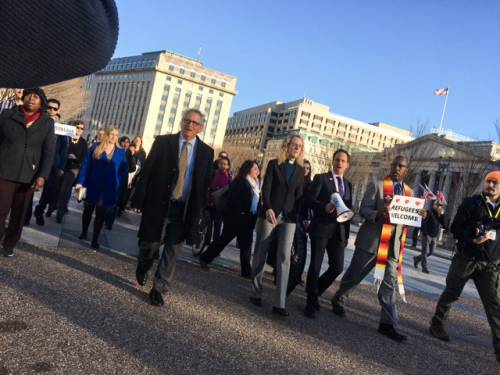 A group of Christian, Jewish and Muslim faith leaders walk in in Washington, D.C. in opposition to the president’s executive order. (Photo by Bridget Wendell)

Trump’s executive order also calls for a crack down on cities that protect undocumented immigrants from deportation, meaning the potential loss of federal funding except in the area of law enforcement.

The faith leaders said the proposals that would disqualify refugees from protection based on their nationality or religion “fly in the face of the very principles this nation was built on, contradict the legacy of leadership and dishonor our shared humanity.”

“When one part of our body suffers, we all suffer. An attack on one of us is an attack on all of us,” said the Rev. Jennifer Butler, CEO of Faith in Public Life and a Presbyterian pastor. “We come here to condemn Mr. Trump’s vicious and unprincipled attack on welcoming immigrants and refugees who come to this country to make a better and safer life for their families.”

The group asks elected officials and candidates for office to recognize the contributions refugees and immigrants bring to the U.S. and stand firm in the call to help those seeking protection.

“Religious liberty doesn’t matter, won’t be real or mean anything to any of us unless it applies to all of us,” said Jim Wallis, president and cofounder of Sojourners. “How we treat the stranger or refugee will be a religious test for us as people of faith and the president needs to understand that this is a matter of faith for all of us.”

“This country was built on the foundation of religious liberty for all of us. If there’s a ban on one religion, there should be a ban on all religions,” he said. “If there is extreme vetting of Muslims, there should be extreme vetting of Jews and Christians. We stand together in resisting a vision of America in which we close our doors and build our walls and keep out the most vulnerable among us.”