Stated Clerk and PMA president among those pushing for changes 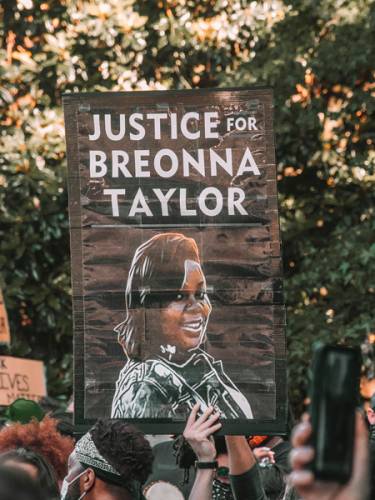 Breonna Taylor was a 26-year-old emergency medical technician killed in her home March 13 by Louisville Metro Police. (Photo by Maria Oswalt on Unsplash)

LOUISVILLE — The Rev. Drs. J. Herbert Nelson, II and Diane Moffett are among more than 340 signers of a statement demanding justice for Breonna Taylor, a Louisville woman slain by police.

Firing, prosecuting and charging the three Louisville Metro Police officers involved in the fatal shooting of Taylor is chief on the list of demands from an interracial, interfaith group of signers who include Nelson, stated clerk of the General Assembly of the Presbyterian Church (U.S.A.), and Moffett, president and executive director of the Presbyterian Mission Agency.

“As faith leaders in Louisville, we call on the Mayor, Metro Council and the Attorney General to heed the calls for justice that have echoed in our streets in these recent days and for decades,” the faith leaders state. “We will never have peace without justice, and we call on you to meet the demands of the Movement for Black Lives, Breonna Taylor’s family, and local leaders.”

Taylor, a 26-year-old emergency medical technician, was killed March 13 while offofficers were executing a no-knock warrant at her apartment, according to news reports. Her boyfriend, Kenneth Walker, fired upon the officers, thinking they were intruders. He injured an officer, and Taylor was killed as police fired into the apartment.

Since then, her death and that of other African Americans, such as George Floyd in Minnesota, have led to weeks of protests around the country and some overseas. These victims “are irreplaceable and they were stolen away,” according to the faith leaders, who include the Rev. Dr. Alton B. Pollard III, president of Louisville Presbyterian Theological Seminary, and Rev. Dr. Derek Penwell of Douglass Boulevard Christian Church.

The statement was written prior to Mayor Greg Fischer’s June 19 announcement that Louisville Police Chief Rob Schroeder had begun proceedings to fire one of the officers, Brett Hankison. The termination became effective June 23, according to the (Louisville) Courier Journal.

The faith leaders also are demanding:

“We see the fulfillment of these demands as a first and critical step in a community-driven comprehensive process of truth telling, justice, and repair for our city and society,” according to the faith leaders, many of whom are based in Louisville or have connections there.

“We’re really just hoping that this increases or broadens the awareness of what people of color are asking for and we’re really hoping to broaden the awareness that … what’s being demanded is entirely consistent with the key teachings of really a broad scope of people of faith and faith traditions,” said the Rev. Dwain Lee, a member of the coordinating team of Louisville Showing Up for Racial Justice (LSURJ).