…be led forth in peace. (Isaiah 55:12). Support to the Peace & Global Witness Offering.
Make A Donation Click Here >
Home › Faith cannot be washed away

Nightmare of Hurricane Matthew continues in Haiti and beyond

At the time of this posting, Hurricane Matthew has killed more than 1,000 people, most in Haiti. 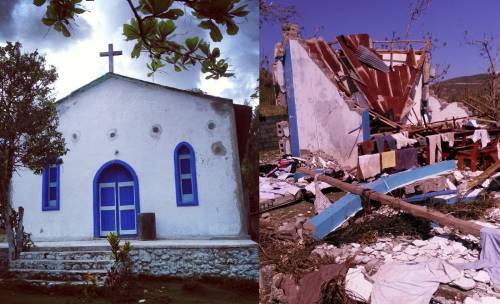 Notre Dame a Fatima Catholic Church in Buvet, Haiti, is a small mission church located next door to the KPGA building. Pictured before the storm in August 2013 and after. (‘Before’ photo by Cindy Corell. ‘After’ photo by Joseph Alliance, ActionAid Haiti)

BANÍ, DOMINICAN REPUBLIC – Hurricane Matthew was like a very bad dream, watching a slow-motion bullet heading toward someone you love, unable to do anything to stop it. I kept the National Hurricane Center’s webpage open for five or six days, morning, afternoon and night; checking every few hours to see what the storm was doing. My wife, Jenny, would ask me periodically, “Any news?” For at least four of those days, there really was no news, nothing to do. Just wait, watch, pray.

Then on October 3, this gargantuan storm hit the island. Jenny called the folks in Barahona and in Batey 7, one of the communities of Dominicans descended from Haitians brought to the Dominican Republic to harvest sugar cane, to find out what was happening. Theoretically, we should have been in the middle of it—at least in the middle of what hit the Dominican Republic. When we came back to the DR on August 30 to begin our new term of service as mission co-workers for World Mission, a ministry of the Presbyterian Mission Agency, we were committed to finding a house in Barahona, where we would have relatively easy access to the communities where our partner here, the Dominican Evangelical Church (or IED), has asked us to serve. But our base, as we have looked for a new home, has been in Baní, about two hours east of Barahona. Baní is where the IED has a retreat center and there is plenty of space for a family to stretch. We have been working hard to get a home back in Barahona, but we had just found one that looked really good when Matthew headed up the road. Regardless of what we wanted to do, we had to sit tight here.

It wasn’t easy to connect with our friends in Barahona, but Jenny finally did. They told us that they had no electricity, but that is not so abnormal here. Mostly they were just dealing with rain, rain and more rain. The flooding we feared in Batey 7 never materialized. One friend explained that with very heavy rains, the force of the water is enough to wash all of the obstructions through the drainage system, clearing them out and preventing seriously flooding. “It’s the less powerful rainstorms that do the worst damage to us; the ditches stay blocked up with trash and other material and the houses and lower parts of the town get flooded.” 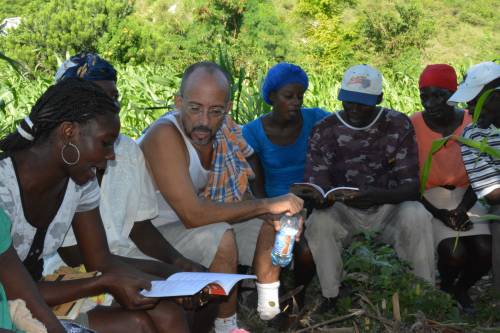 PC(USA) mission co-worker Mark Hare works with several teams of Haitian farmers in a program that shares ideas about how to grow a lot of food on small plots of land. Much work has been washed away by Hurricane Matthew, but the Haitian people remain resilient and hopeful. (Photo by Cindy Corell)

I started calling Haiti on Monday, but it was not until Tuesday that I finally got in touch with one friend, Herve Delisma. Herve was dealing with a roof that had partly blown away Monday morning. He had gone into town Monday afternoon to get materials to repair it. I have no idea how he made that happen. Herve is innovative and persistent, but he does not have a ready supply of cash, and how did he make it going through the middle of the storm? In any case, by the time I reached him on Tuesday, he had gotten the roof back together, at least for the moment. Herve is a member of Farmer Movement of Papaye (MPP), a grassroots organization that has been a partner of PC(USA) since the 1990s.

I asked Herve to help me check on other people we know—friends and colleagues from the mountains of Léogâne, Verettes and Bayonnais, places where Herve and I had been working together as part of a food sovereignty program after the 2010 earthquake. I also called Givenson Laurent, an agricultural technician friend in Verettes. Verettes is in one of Haiti’s breadbasket regions—fertile valley formed by the Artibonite River. The area is a study in contrasts—rich green river valley surrounded on both sides by denuded mountain ridges. We have been working up in those mountains with a farmer organization called MRPST, one member of a large network of farmer’s organizations that is working with Joining Hands, a ministry of the Presbyterian Hunger Program. MPP helped found FONDAMA, the Joining Hands network in Haiti.

Givenson told me he was fine and his family was fine, but four of his goats had died, either from the days of extreme wetness, or from drowning. Givenson also gave me news from some of our contacts in the mountains. Many crops and farm animals were lost, he told me, along with a few houses. But our friends had not yet heard of any lives lost.

Between them, Givenson and Herve eventually got hold of folks in Bayonnais who are part of MPB. Bayonnais is on the northern edge of the Artibonite valley, where there are more mountains than valley, but still some irrigated land. MPB is part of the same network as the organizations in Verettes. The director, Viljean Louis, presented the same story as Verettes—livestock dead, crops close to a total loss and some houses damaged, but all lives, as far as he knew, had been spared. Viljean mostly lives in the urban area now but, together with his wife, maintains their gardens up in a remote area of the Bayonnais hills. The day he spoke to Herve, he was headed back to his home in the mountains where he will be better able to assess what has happened there.

The story from Léogâne was different. Luccène Sommervil is the coordinator for the farmer organization there, ODEPOL. He has also become our close friend, leading us through the mountains from community to community over the last four years. The initial news that Herve shared from Luccène last Wednesday was that in his community all of the crops were lost, most of the farm animals were dead and many of the houses had been completely destroyed. Luccène also shared that at least one person had died when a tree fell on their house. Luccène’s son, Gastner gave a more personal picture. Gastner shared that everything was destroyed in their yard; the hurricane left them nothing except their lives.

Reading news from Jeremie, where Matthew made a direct hit, chills me to the bone. I cannot, maybe do not, want to imagine the devastation. But these other bits of news that come as directly as possible from our friends in the mountains of Verettes and Bayonnais and especially Léogâne—they affect me in a different way. I know these people. I have slept in their communities and shared meals with them countless times. I can smell the coffee that the women in the homes prepare as part of our morning meal. I have spent wonderful moments in Luccène’s house in particular, the house that is now no more. I have walked the mountain paths to reach his home, past the yards and fields full of food, and I have enjoyed that lush beauty in those high mountains. I can picture right now the view from Luccène’s yard, 3,000 feet above sea level, looking down mountains that flow from his yard to the ocean, La Gonâve Bay, in a precious but precarious panorama. Hearing of the devastation wrought here hurts me where I have no defenses.

I have worked with Haitian farmers and their organizations long enough to deeply respect them for their strength and tenacity. I have no doubt that individually and together, the rural people of Haiti will find a way through this calamity as they have found a way through so many tumultuous times during their more than 200-year history on this Caribbean island. Indeed, when I spoke with Mulaire Michel, a leader in MPP, this morning, he indicated that together with other organizations in the farmer network, MPP is already creating a fund for the people hit the hardest in Haiti’s south, the southwest and perhaps Léogâne, 30 miles west of Port-au-Prince.

But I also know from my experiences after the earthquake in 2010 that the communities in the high mountains of Haiti are the least likely to find any direct benefit from most of the aid that will come. In 2012 after my first visit to those mountains in Léogâne, I spoke with an aid worker from another organization about the devastating stories I had heard. The aid worker responded that yes, he had heard there were many families who had lost their homes and there were many schools that had fallen down, along with many churches, but there were no roads to those communities, so what could be done? His focus “had” to be the communities accessible by road.

I have never felt strong enough to be part of disaster relief and recovery. But this one is personal—people I know and deeply appreciate have lost everything. I have no idea how my skills and abilities might be used effectively in this context, while still keeping faith with the new work that Jenny and I together are committed to here in the Dominican Republic. But at the very least, I ask that our compassionate Lord may help me make sure the stories of some of these incredible, common people are told, and told well.

Mark Hare and his wife, Jenny Bent, serve Christ together as mission co-workers in Haiti and the Dominican Republic. 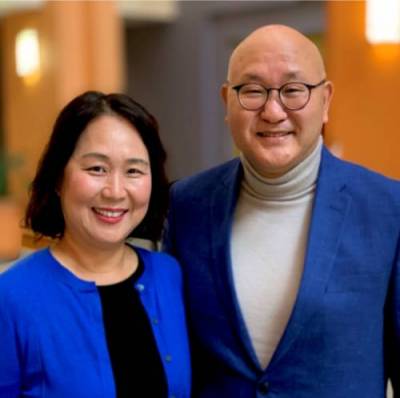