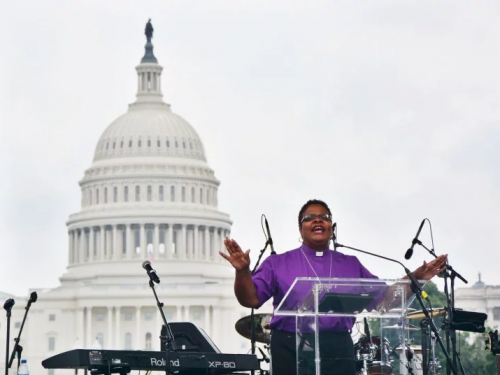 United Methodist Bishop LaTrelle Easterling preaches during the “United to Love” rally in Washington, D.C., in opposition to the “Unite the Right 2” white supremacist demonstration on Aug. 12. (RNS photo by Jack Jenkins)

WASHINGTON — When white supremacist groups announced plans to hold a demonstration in the nation’s capital to mark the one-year anniversary of the “Unite the Right” rally in Charlottesville, Virginia, many were concerned the day would descend into violence as it did in 2017, when one woman was killed and many more injured after a man who had marched with racists allegedly plowed his car into a group of counter-protesters.

But by Sunday evening (Aug. 12), Washington had hosted far more anti-racist Methodists, Baptists and other religious demonstrators than white supremacists, and the thousands of other counter-protesters spread across the city suggested white nationalists had inadvertently done more to unite people across religious and racial differences than bolster the ranks of racists.

Some religious groups have been actively fighting against racism throughout America’s history, and a band of faith leaders and theologians were among the few who stared down white supremacists in Charlottesville last year. But a broad swath of religious groups began organizing ahead of this year’s rally in Washington, hosting vigils, trainings and events. Auburn Seminary, the Council on American-Islamic Relations) and Bishop Michael Francis Burbidge of the Roman Catholic Diocese of Arlington, Virginia, also issued statements condemning racism, the planned white supremacist rally or both.

“Let us pray for those who shout ‘Jews will not replace us’ or ‘you will not replace us,’” the Rev. William Barber of the Poor People’s Campaign declared at a teach-in Friday at Washington Hebrew Congregation. He was referring to the haunting chant bellowed by white supremacists the year before as they marched with torches onto the University of Virginia campus — all while, as Barber noted, a group of religious activists met to condemn racism in a church across the street.

“(We know) those who have been overcome by the insanity of hate and the insanity of racism. For we know it is a disease, a terrible disease of the spirit that diminishes the humanity of anyone it infects.”

On Sunday, this blitz of faith-based activism was evident across the city, beginning with a “United to Love” rally on the National Mall organized by the Baltimore-Washington Conference of the United Methodist Church. Dozens of attendees swayed and sang as a choir led the group in singing hymns, and some waved signs emblazoned with slogans such as “Jesus was black” and quotes from the Rev. Martin Luther King Jr., such as, “Darkness cannot drive out darkness; only light can do that.”

The event also included a sermon from the conference’s Bishop LaTrelle Easterling, who stood silhouetted against the U.S. Capitol as she spoke. She repeatedly condemned racism and white supremacy, arguing that those who champion racism “betray God.”

As she spoke, a lone white man walked up to demonstrators and began shouting racial slurs, insisting white supremacists will “rule the night.” When security officials turned to face him, he quickly fled.

Cassandra Lawrence, a student at Wesley Theological Seminary in Washington and member of Foundry United Methodist Church who attended the Methodist rally, explained that while the heightened profile of such vitriol has galvanized racists, it also has united others to counter it.

“I think that they rise together,” Lawrence said, noting that more than 40 people were attending the event from Foundry alone, with others planning to stop by after their worship service.

“In our darkest moments, our brightest moments also rise. You’re seeing more and more people getting involved — there are churches all over the region today who maybe aren’t here, but they’re having vigils, they’re preaching sermons. … Everybody is coming alive.”

The broad mobilizing power of combating white supremacy was on full display a few blocks away in Freedom Plaza, where hundreds gathered for another rally against racism, this one primarily organized by secular organizations. The crowd showcased a wide diversity of causes: Black-clad anti-facist groups stood alongside LGBTQ advocates as different speakers took the stage, each condemning the wrongs of racism.

But here, too, faith groups had a substantial presence. Jewish protesters painted their faces with Stars of David and waved signs reading “Jews are welcome here,” Unitarian Universalists stood around a banner reading “Standing on the side of love,” and Quakers gathered around a sign reading “Love thy neighbor, no exceptions” — a reference to Mark 12:31.

“I am a black, queer, Jewish, Hebrew priestess,” said Harriette Wimms, a Baltimore psychologist and one of the speakers at the rally. “Basically, I’m the alt-right’s worst nightmare.”

Dotting the crowd were several faith leaders from various traditions, many clad in religious clothing or vestments.

“We need to stand up against anything that negatively affects God’s people,” said the Rev. Gayle Fisher-Stewart, an attendee of the event and an Episcopal priest at Calvary Episcopal Church in Washington. “We need to be here, to show up and to let people know that no one is better than anybody else, that we are all created in the image of God.” 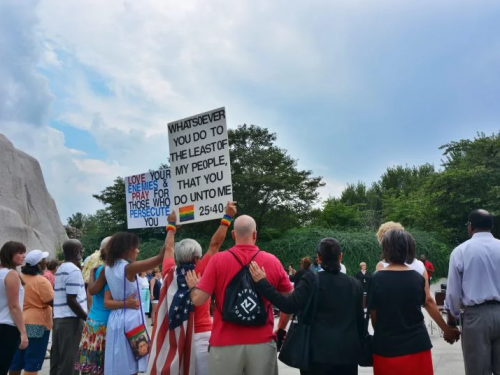 Baptist worshippers join hands at a prayer and Communion service at the Martin Luther King, Jr. Memorial on Aug. 12. The interracial service was one of many demonstrations meant to counter the white supremacist “Unite the Right 2” rally convened the same day. (RNS photo by Jack Jenkins)

Forging unity across difference was also a key theme at a Baptist gathering convened around the same time at the Martin Luther King Jr. Memorial, although the tone was less overtly adversarial. There, two Washington congregations — First Baptist Church, which is predominantly white, and Nineteenth Street Baptist Church, which is historically black — convened for a joint Communion service organized by the New Baptist Covenant, an organization founded by former President Carter.

The Rev. Julie Pennington-Russell of First Baptist told the small, interracial crowd that white Christians should do more to acknowledge how faith has been used to justify racism and how “the sin of white supremacy was embedded in the founding documents of this nation … (and) has done irreparable harm to generations of African-Americans and Native Americans.”

The Rev. Darryl Roberts, pastor of Nineteenth Street Baptist, explained that the churches had once been a single congregation, but split across racial lines in the mid-1800s. Sunday’s service was the first public expression of their attempts at sustained relationship building and dialogue.

“You have a predominantly white congregation and a black congregation coming together at a historic moment to send a message of unity in a time of hatred,” he said.

Back near the White House, an unexpectedly small band of white supremacists finally arrived at the site of their demonstration. The tiny gathering — fewer than 30 people, surrounded by walls of police — was dwarfed by thousands of counter-protesters whose numbers extended beyond Lafayette Park and spilled into the streets for nearly a block.

Huddled near the back of the park was a group of Quakers sitting in quiet protest just a few feet away from a cluster of roughly 15 interfaith clergy that included priests, pastors and Muslim leaders. Both groups had originally intended to stage direct action protests against the white supremacists, but they abandoned their plans after observing the one-sided nature of the event.

“We can’t even get through there right now,” said Sandy Sorensen, smiling as she pointed to the sprawling crowd. An organizer with a local United Church of Christ congregation, Sorensen explained the group of clergy now planned to offer as-needed pastoral support for the Black Lives Matter group.

When the same group was shown an image of the small white supremacist gathering across the way, the Rev. Susan Hayward, a UCC pastor who was among those who counter-protested in Charlottesville last year, shook her head in disbelief.

“Wow,” Hayward said before looking over her shoulder at the mass of rowdy counter-protesters behind her. Shortly thereafter, she and her fellow faith leaders turned back toward the crowd, looking for ways to help their several thousand new allies in the fight against white supremacy.